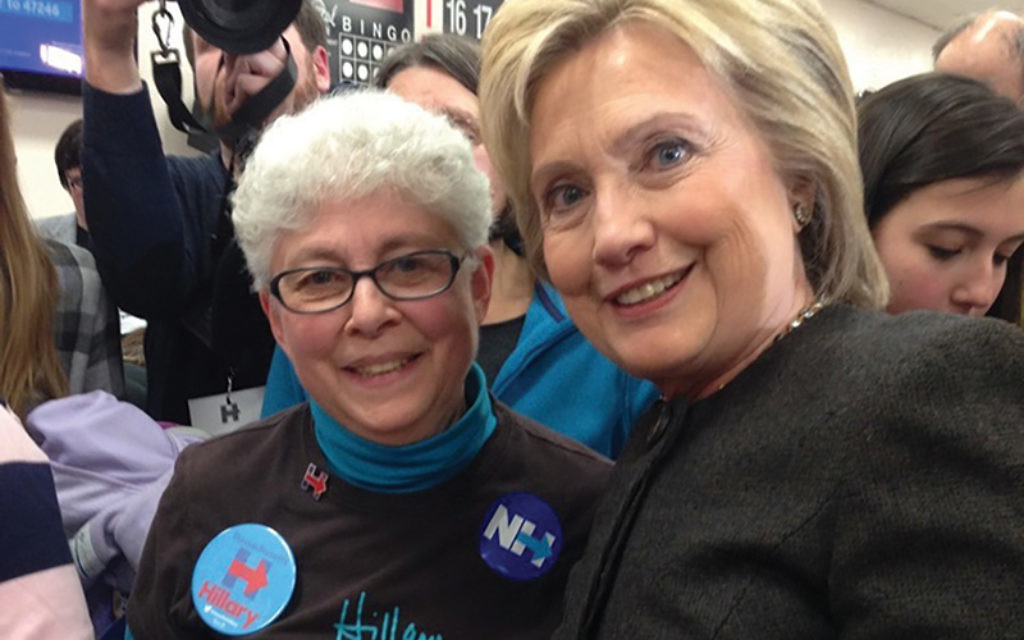 When Norma Shulman recently spoke before a gathering of Massachusetts Democrats, she held up the Adlai Stevenson campaign button her mother wore back in 1956.

“I was born into it,” says the resident of Framingham, Mass. At age 70, Shulman has logged countless hours stumping for Democratic candidates over the years, including former Massachusetts Gov. Michael Dukakis, former Massachusetts treasurer Steven Grossman, and now presidential candidate Hillary Clinton. Working the phones, training newbie callers, and knocking on doors — it’s all part of the game for Shulman. Now, she has beaten out several other contenders to win a district seat as a delegate to the Democratic National Convention.

“Being a Democrat is in my blood, and Hillary is a good candidate to work for,” Shulman says. “In extreme cold or heat, when you’ve already spent seven hours knocking on doors, you can’t stop because someone has to do it. It’s the way you make a difference.”

While Shulman spreads the Clinton message, just a few miles away, Debra Livernois of Littleton, Mass., makes the case for presumptive Republican nominee Donald Trump with friends and strangers alike. In her first foray into presidential campaigning, the former registered Democrat is taking on all kinds of responsibility.

“I began to have grave concerns about how this country is being run,” says Livernois, 54. “And, when they opened a state Trump headquarters in my town, I walked in and signed up.”

Standing in the cold at the polls for nine hours on Election Day is just part of what she does.

“For me, it feels like a once-in-a-lifetime opportunity to have an impact,” she says.

“And Jews are no exception,” says Sarna, who many consider to be the leading historian on American Jewry. “But Jews as a whole also vote at much higher levels than many other American groups.”

And why is that the case?

“Older Americans tend to be more rooted in their communities,” Sarna says. “They know from experience how important every vote is, and they have more time for civic engagements.”

Like the old man in the Talmud who planted a carob tree knowing he would not live to enjoy its fruit, older Jews have a tradition of political activism to benefit the next generation.

“We Jews are used to raising our voice when we see a need,” says Roz Grunmann, 68, another Boston-area Clinton campaigner who works the phones and also canvasses door-to-door.

“Many cultures don’t give that permission, but today it’s not dangerous for Jews to be politically active and outspoken, and that has not always been the case,” adds the retired history teacher. “What’s more, today people our age are getting more active; we’re not slowing down.”

Jews may also have more at stake than the average U.S. citizen.

Concern for Israel’s safety is something that surveys show particularly resonates with older American Jews, many of whom recall the founding of the Jewish state as one of the highlights of their lives. Livernois, for the record, sees her candidate — Trump — as “absolutely a huge Israel supporter.”

Grunmann, from the Democratic vantage point, defended President Barack Obama’s record before skeptical friends and relatives during a recent visit to Israel to see her son. Jews, she says, “are always asking ourselves which candidate is better for Israel. There’s some real concern over Obama’s policies over there [in Israel], and I found myself arguing with a number of Israelis.”

“Israel is often foremost in the minds of Jewish voters who remember the Holocaust or a world before there was a state of Israel,” he says. “Fortunately, they are the highest percentage of folks likely to vote. Unfortunately, they are also dying. Soon there won’t be anyone who remembers the Shoah firsthand. The Jews will only have known a strong post-[19]73 State of Israel.”

For every actively campaigning Livernois, Shulman and Grunmann, there were countless other Jewish seniors who were disheartened by the crop of candidates during the primary season. Such is the case for 75-year-old Abraham Miller, who leans to the right but isn’t sold on Trump.

“This year, I suspect I will have to hold my nose and force myself to vote,” says Miller, a retired political science professor at the University of Cincinnati who is now living in the San Francisco Bay Area and writing op-eds for the Haym Salomon Center. “It’s a national disaster in terms of what the parties have fielded this year, but I guess we get the candidates we deserve.”

But Shulman, the Hillary booster, refuses to be derailed from her focus on getting another Clinton into the White House.

“I can’t leave it for someone else to do because I don’t know that it would get done,” she says. “And I don’t want to be the one who sees my candidate lose by one vote, knowing I did not go out and get that vote.”

“You have to do something to help,” agrees Trump supporter Livernois. “The older you get, the more you’ve seen of the way the world works and the more concerned you are with what kind of world this will be for your children and grandchildren. That alone can make you do your part.”