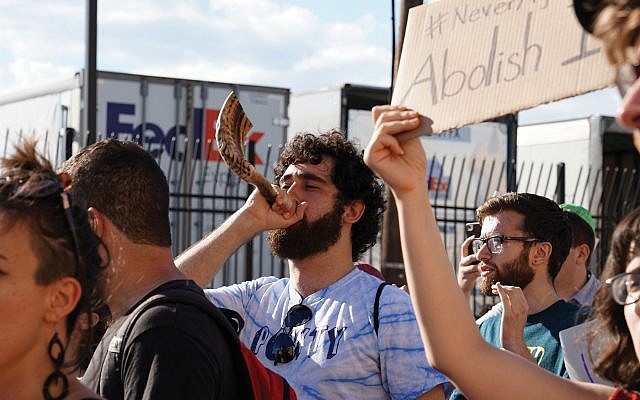 Last Monday, a group of Jewish activists started planning a demonstration with Movimiento Cosecha, an organization advocating for permanent protection for undocumented immigrants. Disturbed by reports they had heard of detention centers along the southern border, where migrant children were held without access to basic necessities like soap and toothbrushes, they felt they had to do something.

By Sunday afternoon, they were standing with a crowd of approximately 200 Jews, 36 of whom would later be arrested, outside an ICE detention center in Elizabeth, N.J., to block entrances to the facility and call for the abolition of the Immigration and Customs Enforcement federal agency.

The choice of the slogan “never again” was no coincidence. After two-and-a-half years of anti-immigrant policies from the Trump administration and restrictions on asylum seekers and refugees, Jewish activism around immigration has reached a boiling point. Enraged by the anti-immigrant rhetoric of the Trump campaign and policies of the Trump administration, Jewish communities and synagogues have rededicated themselves to advocating for increased immigration and support for refugees.

With last year’s revelations of the family separation policy and recent threats by the president of massive ICE raids on immigrant communities, Jewish groups have stepped up their efforts even further.

“The Jewish community has responded powerfully to the attacks on immigrants and refugees and asylum seekers over the past two-and-a-half years,” said Rebecca Kirzner, director of grassroots campaigns at HIAS, the refugee protection group that used to be known as the Hebrew Immigrant Aid Society. With an uptick in donations, HIAS recently hired staff to work in cities along the southern border with local immigration agencies and to coordinate with Jewish organizations and synagogues sending volunteer delegations. “They’re really connecting their own Jewish history, their own family stories and their Jewish values and approaching this as a Jewish issue,” Kirzner said. At the same time, Jews and Jewish history have become political footballs in the immigration debate. After Queens-Bronx Rep. Alexandria Ocasio-Cortez described the migrant detention centers as concentration camps, Republican lawmakers and some Jewish organizations criticized her use of Holocaust terminology. Others supported her use of the term, and some were frustrated that the argument over her words had overshadowed the humanitarian crisis. Sunday’s protest, titled Never Again Action, argued that “never again” means opposing the current administration’s immigration policies.

“We really believe as Jews that ‘never again’ means never again for anyone and that means taking action right now,” said Sophie Ellman-Golan, a spokesperson for the Women’s March and an organizer of Sunday’s protest. The protest was organized by activists affiliated with several organizations but was not formally connected with any of them. “We’ve heard more outrage from politicians on the words used to describe these camps than on the conditions that exist in the camps themselves and they’re doing that in our name and that’s unacceptable.” 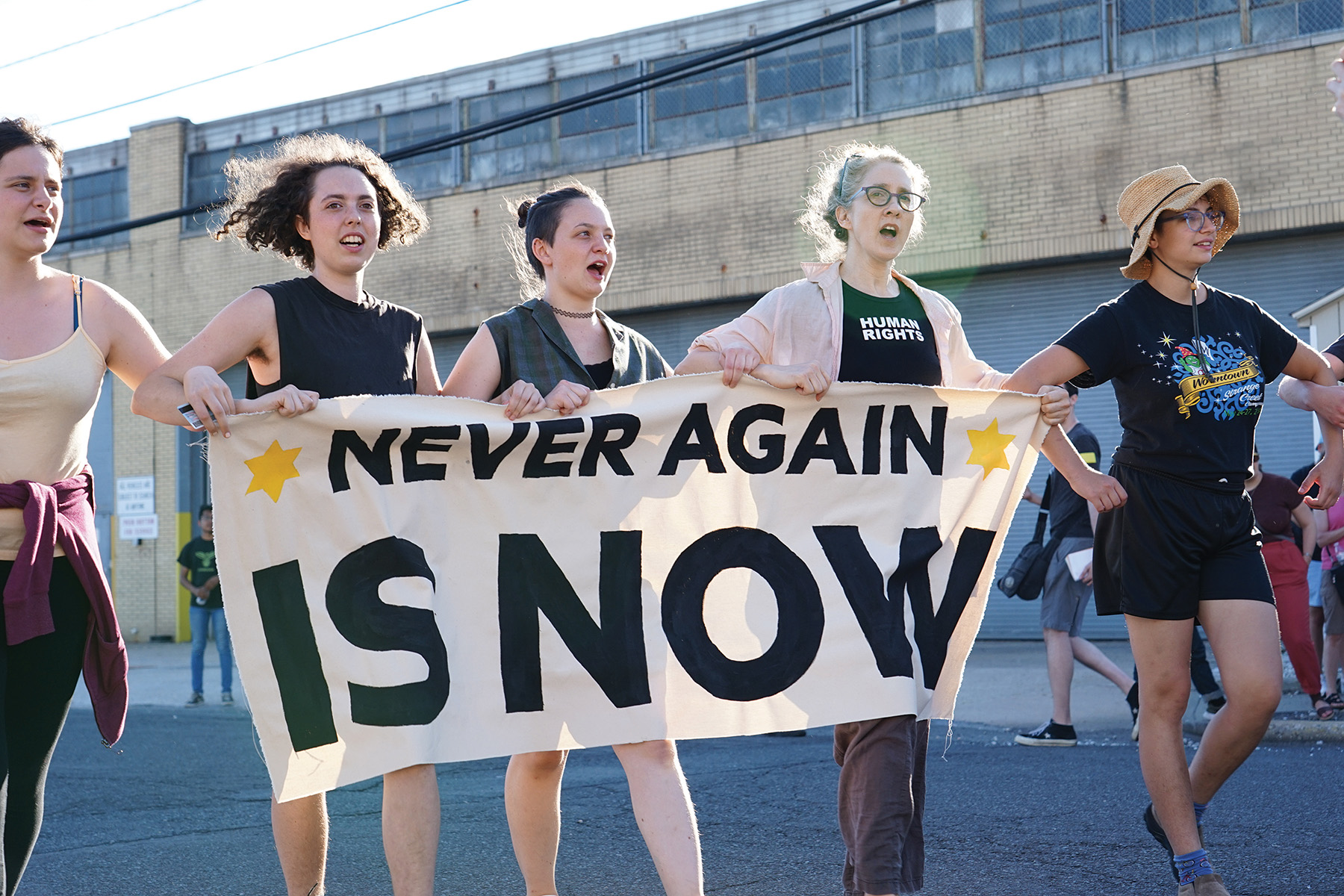 Members of the new activist group Never Again Action during a protest Sunday at an ICE facility in Elizabeth, N.J. Nur Shlapobersky

The immigration policy debate recently made it to the Democratic presidential primary debate stage. “The president has turned the border of the United States into a symbol of nativist hostility that the whole world is looking at when what we should be represented by is the Statue of Liberty, which is what brought my parents to this country,” said Colorado Sen. Michael Bennet, whose parents were Holocaust survivors, in the first Democratic primary debate last week. Former San Antonio Mayor Julian Castro raised his national profile by speaking forcefully about the need to decriminalize illegal immigration.

Pete Buttigieg, the South Bend, Ind., mayor, used the debate to dig at the religious character of the GOP. “The Republican Party likes to cloak itself in the language of religion,” said Buttigieg. “For a party that associates itself with Christianity, to say that it is OK to suggest that God would smile on the divisions of families at the hands of federal agents, that God would condone putting children in cages, has lost all claim to ever use religious language again.”

(In the wake of the debates, Republicans, who favor tougher immigration laws, revived their argument that the Democrats are essentially the party of open borders.)

In recent years, T’ruah has helped 70 synagogues join the sanctuary movement, in which some synagogues host undocumented migrant families seeking refuge in their buildings or help provide for migrants hosted by other houses of worship. ICE has traditionally avoided arresting migrants in “sensitive locations,” including houses of worship, though there have been exceptions.

Rabbi Jacobs noted that synagogues and Jewish organizations have been involved in immigration advocacy for years, pointing to the flurry of activity around an immigration reform effort in 2006. But, she acknowledged, “even though there’s been a crisis for years, right now it’s impossible to look away.”

Though far from the border, a number of synagogues in New York City have joined the New Sanctuary Coalition, which trains houses of worship to accompany migrants to immigration court hearings and assist with paperwork. The congregants and clergy of Lab/Shul, a downtown Manhattan pluralistic congregation, have been accompanying migrants to ICE hearings over the past year. According to Rabbi Amichai Lau-Lavie, the founder and rabbi of the seven-year-old congregation, seeing people with religious ties in a courtroom can help an immigrant’s case. “Having clergy or having people at these hearings makes a difference for the judges and for ICE agents,” said Rabbi Lau-Lavie.

The synagogue first became involved in immigration advocacy during the height of the Syrian refugee crisis. By the time the immigration crisis became a major domestic issue in the United States, the synagogue was already invested in and focused on immigration. The community is now involved with a shelter for LGBTQ asylum seekers in Harlem and has connected several lawyers in the congregation with asylum seekers in need of pro bono legal assistance.

“There is no ‘us’ — that’s not ‘this,’” said Rabbi Lau-Lavie. “‘This’ is something that as humans and as Jews and as activists for freedom, we have to get behind.”

Congregation Beit Simchat Torah, an LGBTQ synagogue in Midtown Manhattan, recently opened a weekly immigration clinic where lawyers and other volunteers assist migrants with their cases. The synagogue now offers a continuing legal education course to train lawyers who then staff the clinic.

“The radical religious right wing has weaponized religion, has turned religion into a weapon against people,” said Rabbi Sharon Kleinbaum, rabbi of CBST. “We want to show that religion is a source of liberation.”

Several synagogues in New York City have worked with HIAS to lobby lawmakers on behalf of refugees and asylum seekers. While bringing politics into a synagogue can be tricky, immigration is one issue that tends to engender less disagreement than other issues.

“We don’t all have the same vision of what immigration should look like,” said Rabbi Lauren Grabelle Herrmann, rabbi of the Society for the Advancement of Judaism, a Reconstructing Judaism synagogue on the Upper West Side. “We can still agree that nobody should be separated from their parents, nobody should be deprived of soap.”

“This issue tends to be fairly unifying across the Jewish community,” said Kirzner of HIAS. “It’s because of our history as immigrants and our historic advocacy on this issue.”

With the passage of a humanitarian aid package for migrant shelters by both chambers of Congress last week, considered a defeat of progressive Democrats’ attempts to restrict the money from being used to enforce immigration law, the protests and advocacy are unlikely to end soon. Several Jewish organizations and protesters are planning to participate in further protests as well as the Lights for Liberty vigil protesting migrant detention conditions on July 12.