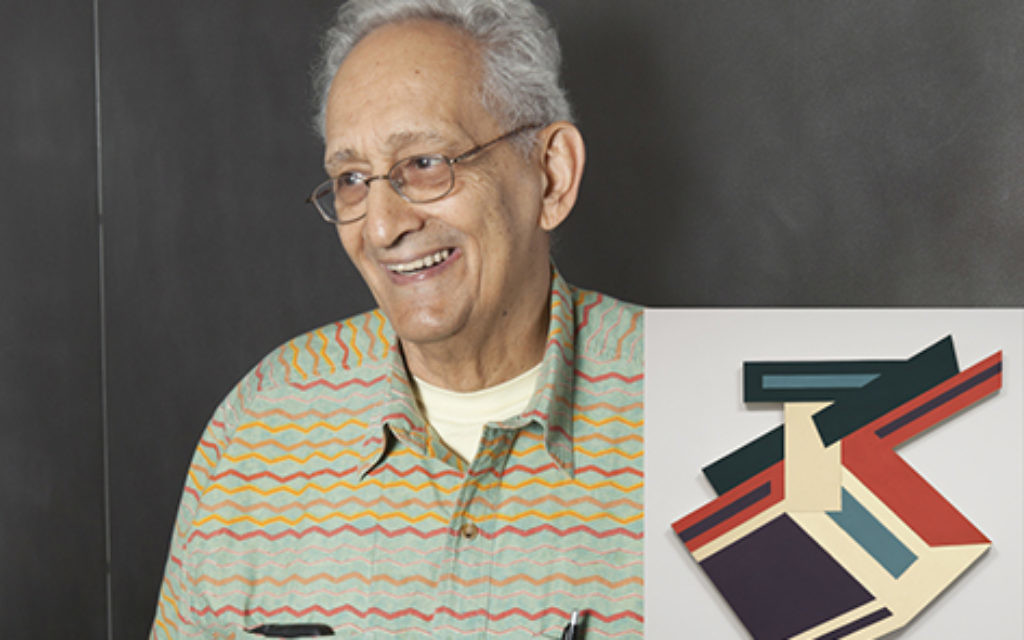 To view the Frank Stella retrospective at the Whitney Museum, with its mix of six decades of abstract painting styles and materials, is to witness the work of a prolific, forward-looking, innovative artist who liked to say, “What you see is what you see.”

But it was a backward glance in 1970 that seemed to propel him in a new direction.

Stella was recuperating in the hospital after a show of his work at the Museum of Modern Art, when his friend, the architect Richard Meier, brought him the 1959 book “Wooden Synagogues” by Polish architects Maria and Kazimierz Piechotka. The book, now out of print, features vintage photographs of Polish synagogues, all burned and destroyed by the Nazis well before the book was published. Those images inspired Stella to create a series of sculptural paintings reflecting the shapes and angularity of the buildings. Up to that point, his paintings had been on flat canvas.

Several striking examples of Stella’s “Polish Village” series, are featured in the Whitney show (on view through Feb. 7). Identifiable by their titles, like “Chodorow II” (1971) and “Kaminoka Strumilowa IV” (1972), which are the names of villages, the paintings are large-scale, multi-dimensional collages in a mix of colors, with shapes deconstructed and fit together as interlocking puzzle pieces, and no curved lines in sight. One, “Bechhofen” (1972), made of untreated wood in multiple layers, most resembles one of these lost structures. The Jewish Museum showed some of these paintings in 1983.

At the press opening last week, Michael Auping, chief curator of the Modern Art Museum of Fort Worth, who curated “Frank Stella: A Retrospective” along with Adam Weinberg, director of the Whitney Museum of American Art, identified the series as a central part of Stella’s career. “He was breaking apart geometry. Frank was a very physical painter, and got increasingly physical after this series.”

Dominique Levy, whose eponymous gallery represents Stella along with the Marianne Boesky Gallery, notes that the paintings neither mourn nor memorialize what was lost. Instead, she says, “I see them as a celebration of the construction, communality, and inventiveness of the original structure; they embody the strength and faith found in those places.”

The two galleries are planning to publish a complete catalogue of the more than 130 paintings in the “Polish Village” series “to fill the vital need for further scholarship.”

In February 2016, for the first time, Stella’s paintings and their sources of inspiration will be brought together, when the POLIN Museum of the History of Polish Jews in Warsaw premieres the exhibition “Frank Stella and the Synagogues of Historic Poland.”

Artur Tanikowski, a curator at POLIN who is organizing the Stella show there and traveled to New York for the Whitney opening, explained that they are working in collaboration with the 79-year-old artist, featuring his original works as well as preparatory sketches and wood models for the reliefs, along with historical photographs and architectural drawings of the synagogues. In addition, the work of contemporary Polish artists interpreting Stella’s creative process will be included, and there’s also a full-scale reproduction of the roof and painted ceiling of a 17th-century wooden synagogue that once stood in Gwoździec, Poland.