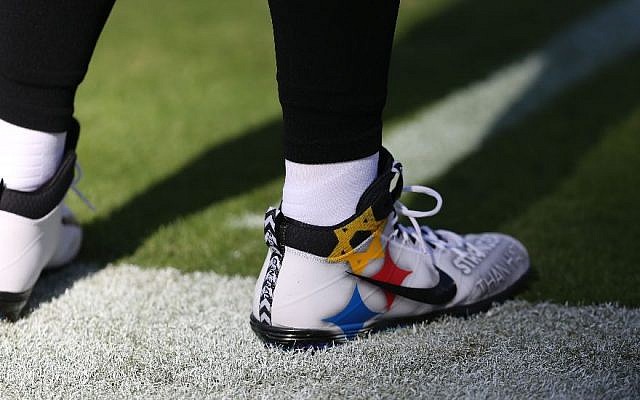 Steelers quarterback Ben Roethlisberger wears cleats Sunday to honor the victims of the Pittsburgh synagogue shooting during the Nov. 4, 2018 game against the Baltimore Ravens. (Will Newton/Getty Images) Via JTA

(JTA) — The Pittsburgh Steelers’ Stronger Than Hate campaign inspired the city and the world to rally around the Jewish community in the wake of the shooting attack on a local synagogue building that left 11 dead.

On Sunday, the NFL team donated $70,000 to help the Jewish community and the families directly affected by the Oct. 27 attack on Tree of Life-Or L’Simcha Congregation building while worshippers were gathered for Shabbat morning services.

Prior to the Steelers home game against the Cincinnati Bengals, President Art Rooney II presented a check to the Jewish Federation of Greater Pittsburgh’s Fund for Victims of Terror. Rooney was joined by Tim Hindes, CEO of Trailblaze Creative, who created the logo, and Mike Withrow from Underground Printing, which also participated in the effort.

“Our community unified to help the victims of the attack on our neighbors, friends and worshippers in Squirrel Hill. Our hearts remain heavy, but we are thankful to everyone who was able to contribute to the efforts to provide emotional and financial support during an unthinkable time in our city,” Rooney said.

The Steelers rallied around the city’s Jewish community in the wake of the attack, beginning with a moment of silence the following day prior to its home game at Heinz Field.

The football team’s logo was edited to include a Star of David next to the words “Stronger Than Hate.” The image was held on posters by fans during the game, as well as signs reading “Shalom” under a Star of David, and “Pittsburgh Strong.”

The next Sunday, Nov. 4, Steelers quarterback Ben Roethlisberger wore cleats to honor the victims of the attack that included the redrawn image of the Steelers’ logo and the words “Stronger than Hate.”

Earlier this month, New England Patriots wide receiver Julian Edelman wore special cleats in honor of the victims bearing the words “The Tree of Life” written in Hebrew, the logo of the Tree of Life-Or L’Simcha Congregation and an Israeli flag with the hashtag #strongerthanhate.

Another $18,000 was presented to the Tree of Life Synagogue on Saturday by 123Shirt.com, the company that printed the T-shirts bearing the Stronger Than Hate logo and sold them to benefit the victims fund.

The Stronger than Hate logo remains on signs around Heinz Field, the Pittsburgh Tribune-Review reported. The Steelers said the signs are a “constant show of support for those who lives were taken and support for those impacted.”

The alleged gunman in the shooting reportedly shouted “All these Jews need to die” during the attack. Before the shooting he condemned HIAS, the Jewish immigrant aid group, on his website. Robert Bowers has been charged with 29 counts.