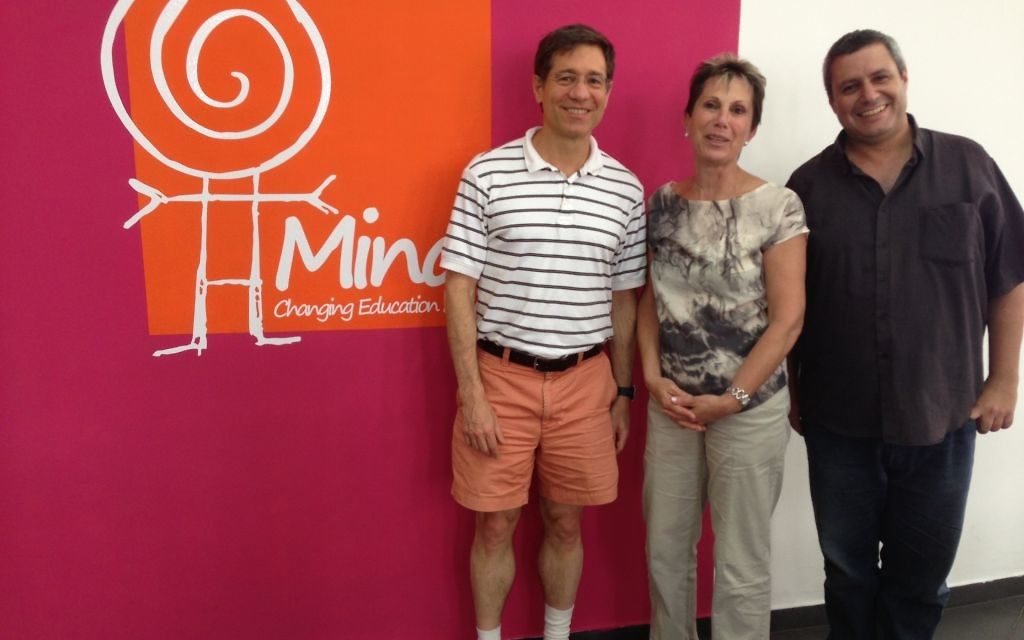 In a move likely to give the fledgling Jewish educational technology field a much-needed shot of capital and know-how, an Israeli nonprofit and an American publishing company best known for its Hebrew school textbooks are teaming up to create the first-ever incubator focused on developing Jewish educational games, apps, software and other high-tech resources.

Israel’s Center for Educational Technology (CET) and the Springfield, N.J.-based Behrman House announced the joint project Tuesday — the news was closely guarded until then — at CET’s annual “Shaping The Future: Innovation, Education and Entrepreneurship” conference in Tel Aviv.

Called jLearningLabs, the new venture will be financed with between $500,000 and $800,000 in seed capital over the first two years, Behrman House’s president, David Behrman, told The Jewish Week in an exclusive interview last week, before the partnership was made public. While the partners have not yet raised the seed money, they are in discussion with various institutions and foundations, and plan for the incubator ultimately to be self-sustaining, with revenues from finished products helping to finance future ones.

While there have been some philanthropic investments in promoting Jewish educational technology — including $500,000 in grants awarded by the Jewish New Media Innovation Fund two years ago and a number of smaller grants through Avi Chai Foundation and the Covenant Foundation — this is believed to be the first major partnership between a for-profit and nonprofit in this field.

jLearningLabs, which will begin operating early in 2014, will offer three tiers of involvement: some entrepreneurs will be housed at Behrman House’s suburban headquarters 27 miles west of Manhattan, others will participate remotely from various locations and a third group will receive support but in a more flexible, less-scheduled manner. Participants will also have opportunities to network with peers at MindCET, CET’s Negev-based incubator for Israeli ed-tech entrepreneurs.

Projects will receive funding, in-kind services and other assistance. Incubated entrepreneurs will have the “benefit of collaborating with other projects, getting our management expertise and our infrastructure,” Behrman said, adding that jLearningLabs will also broker matches between professionals with complementary skills.

“If you’re an educator with an idea, and I’m a tech person without the Jewish education knowledge, the incubator might marry the two, where neither could do this on his or her own,” he explained.

Exactly what types of projects is jLearningLabs hoping to midwife?

Behrman said the plan is to “develop a portfolio of projects that are diversified and robust”: a mix of short-term and long-term, low-budget and higher-budget, addressing a range of subjects and a mix of age groups.

“At the higher end of the complexity spectrum we would like to see games around ethics, history, Israel, Bible — almost any subject,” he said. “At the lower end of complexity, are projects that engage children of all ages thinking about the issues in interesting ways,” using a variety of media.

“Over time we’ll see what the market wants and who’s interested,” Behrman added. “It will have to adapt. The worst thing you can do in digital development is create a rigid three-year plan. You have to put it out there and adapt.”

Asked who will end up with ownership and licensing rights to the completed products — particularly if they turn out to be profitable — Behrman said it will vary depending on how much jLearningLabs has invested in them.

“In some cases, if a group comes to us with a team already assembled and some of the work already done, the lab might take equity or a fee,” he said. “If an individual comes to us who needs more help or resources, the lab might own the project and the individual would get the fee. The key is that people earn a fair living. If they have a great idea and it becomes a blowout success, they should be compensated. The more fully formed and developed the team, the more they’ll own. The more the lab is like a general contractor helping to bring together all the pieces, the more it will own.”
Behrman said his company and CET have been working together on several projects for the past 18 months, “so we know each other.”

Those projects include an online Jewish history resource for congregational schools and an application enabling teachers and students to collaboratively annotate and comment on Jewish texts via a Kindle or other e-reader.
In a phone interview from Tel Aviv, Avi Warshavsky, the CEO of CET’s MindCET incubator, said that by combining Israel’s “very dynamic” startup culture and Behrman House’s knowledge of the North American Jewish market, jLearningLabs is “the kind of combination that could bring interesting outcomes.”


“It can be difficult to bring content, even Jewish content, from Israel to the States and from the States to Israel, because there is a cultural bias in both places,” he said. “By collaborating around this kind of work, both sides have a lot to contribute.”

“It also has its own value of connecting Jews from both sides of the ocean,” he added.

Warshavsky’s MindCET currently houses eight projects and brings together educators, researchers and computer programmers from both the Jewish and Arab communities. Among the current projects under development at MindCET, which aims to spur educational programs that can be used all over the world, are a GPS-based geography game that children can play while traveling in the back seat of a car, a crowd-sourcing tool and various resources to help children do research online.

Founded in 1921, Behrman House is a privately held for-profit that publishes a variety of books and educational materials. In recent years, the company has ventured increasingly into digital products, last year launching an “online learning center” — which includes classroom-management and assessment software, along with online access to lesson plans, texts, educational games and other materials.

It also has developed a handful of iPad and iPhone apps.

CET, which is 50 years Behrman House’s junior and is located near the Tel Aviv University campus, was originally a government entity, but is now an independent nonprofit funded mainly from its own income-generating projects and from cooperative ventures.

According to its website, CET is “dedicated to the advancement of the education system in Israel, and in the Jewish community around the globe.” The organization employs over 250 people, has more than 700 textbooks and 70,000 items in its virtual libraries and its websites receive over two million visits monthly.

“We are two organizations with complementary strengths and are both effective and disciplined,” Behrman said. “We have the discipline to set goals and targets, and to help people achieve them in an efficient way. That’s what we’ve been doing with book production all these years: we manage writers, artists and developers on a schedule and have to produce things that are usable, not just nice.”

But isn’t the Jewish educational market — a tiny niche of potential consumers — too small to make labor-intensive high-tech projects profitable or even financially viable?

While acknowledging that the “size of the market is a challenge,” Behrman emphasized that “no one with our combined skills, discipline and focus has ever tried.”

“I see this as very analogous to the book-development business,” he added. “Behrman House operates in a small market, but we still produce books of equal quality — and no one gives us grants. It’s more challenging with software, because it’s faster moving, but I don’t want to surrender to the idea that Jewish software has to be subpar unless some donor comes along with a checkbook.”