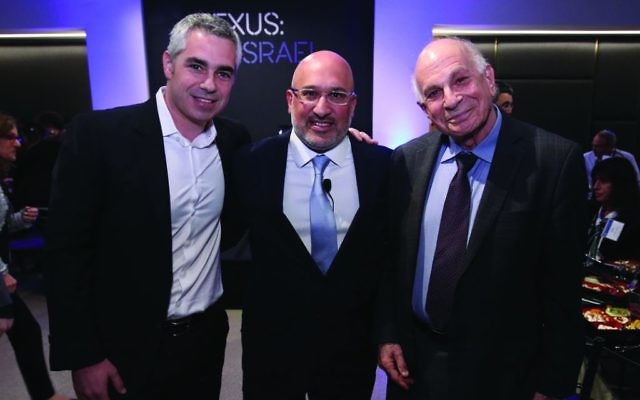 Onstage at a Midtown conference center: a series of speakers describing recent Israeli advances in such areas as agriculture, health and cybersecurity. Behind them: colored slides boasting about Israeli progress in bee pollination and traffic safety. Outside in a hall, on a row of exhibitor’s tables: displays about Israeli-developed products that slow down memory loss, reduce wrinkles in the elderly and prevent food poisoning.

NEXUS: Israel, a daylong education and networking conference coordinated by Hebrew University of Jerusalem’s American Friends organization, for the first time brought together here more than 300 scientists, attorneys, venture capitalists and others to discuss Israel’s latest high-tech advances, and predictions about where the country’s innovation culture is headed.

He declined to speculate on what investment deals were initiated or sealed at Monday’s conference.

“If you come to a conference and you meet one good person or hear one good idea, it’s worth the effort,” said venture capitalist Alan Patricof.

The list of participants in the conference read like a Who’s Who of Israeli innovators and potential U.S. investors, including Nobel Laureates Daniel Kahneman and Roger Kornberg, and former NASA administrator Daniel Goldin.

Such conferences help raise Israel’s visibility, he said; they can help spread the word about Israel’s successes — as do the Israelis with his background who have begun working in many diaspora countries.

Like most of the Israeli participants in Monday’s gathering, Ouzan is a former IDF officer.

Israel has a proven record of soldiers who leave the army and create successful companies, many speakers at the conference said. The Start-Up mentality, said David Blumberg, managing partner of Blumberg Capital, an investment firm, “is the gift that keeps giving [investment opportunities] to venture capitalists.”

“Israel became the Start-Up Nation because,” with limited physical space and few natural resources and hostile neighbors, “there was no other choice,” said Yaron Daniely, CEO of Hebrew University’s Yissum technology transfer company.

What is the next step for the Start-Up Nation?

Encouraging more government investment in education, and bringing more Israeli Arabs and members of the charedi community into the research circles that fuel the country’s high-tech growth, said Maxine Fassberg, Intel vice president in Israel. “We are considered a ‘full-employment’ country,” with a low unemployment rate, she said. “We have to find new sources” of people to turn Israel into a “global financial hub.”

One goal of the conference, said Arkin, was to demonstrate that Israel is not only a good place for venture capitalists to invest, but a welcoming place for the creative-minded to work. Israel doesn’t want only to send its best minds abroad, he said. “We want to absorb them.”