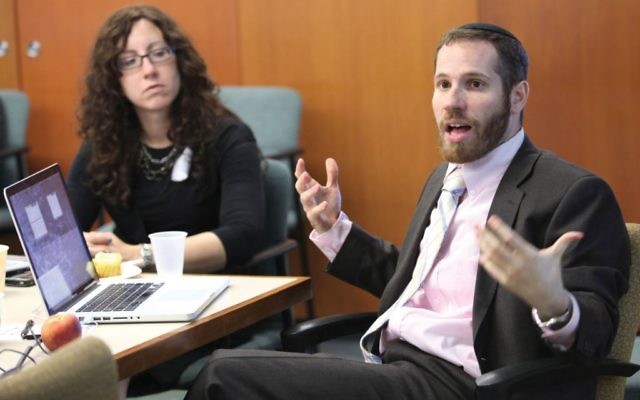 At a Modern Orthodox high school a few years ago, some ninth- and 10th-graders were discussing the kashrut acceptability of some products at Starbucks.

“They were arguing in class: ‘What’s kosher?’” spurred by a recent article they had read about the popular coffeehouse chain, said Moshe Krakowski, who directs the master’s program at Yeshiva University’s Azrieli Graduate School of Jewish Education and Administration.

The students debated, “Can you get x or y or z” – specific drinks – “at Starbucks?” Krakowski said.

The students’ teacher said, “Let’s find out.” He instructed them to thoroughly research the topic.

Over several weeks they consulted “relevant Jewish legal sources in Hebrew and Aramaic,” interviewed kashrut authorities, did onsite visits to Starbucks kiosks and full-service stores, and looked at “videos and references on the machinery, ingredients, and workplace practices at Starbucks,” Krakowski reports in an article in the current edition of the journal Contemporary Jewry.

The students emerged with an enhanced understanding of and appreciation for applied kashrut, and a feeling of educational empowerment, he said. “They were greatly involved.”

Krakowski’s article, “Developing and Transmitting Religious Identity: Curriculum and Pedagogy in Modern Orthodox Jewish Schools,” cites the students’ kashrut project as a successful example of Problem-Based Learning (PBL), a pedagogic technique with roots in medical education that encourages students to master a subject by solving an open-ended problem instead of just reading about the topic.

In other words, Krakowski said, most students find rote learning of Talmud boring, but hands-on projects exciting — they can form their own opinions, instead of having them handed to them by teachers.

His paper proposes that Modern Orthodox schools incorporate PBL as a major component of their curriculum, to counter what his paper describes as an increasing level in many of the movement’s schools of “student apathy about the synthesis of religious and secular learning.”

“A range of ethnographic research conducted over the last decade suggests that modern Orthodox students feel increasingly disengaged from religious studies classes,” torn between the pulls of the schools’ orientation towards religious obligation, and the autonomy of secular culture, Krakowski writes. The result: A growing number of post-high school students either join charedi circles (i.e., “flip out”), particularly after spending time in Israeli yeshivot; or opt out of Orthodox observance altogether (i.e., go “off the derech”).

His solution: wide-scale adoption of the PBL approach in Modern Orthodox schools.

Krakowski said he conducted intensive research at the out-of-town school, observing classes and interviewing students and faculty members, and also spoke with representatives of another 10 Modern Orthodox schools.

PBL is a natural fit for such schools, which encourage students to determine their own beliefs and levels of religious observance instead of following community norms, he said. “There’s very little downside to trying it.”

“A few” Modern Orthodox high schools have started to “pursue things close to PBL” in the last few years, Krakowski said. The number is not greater, he said, because most teachers are not trained to teach with PBL — and that’s not the way they learned when they were students.

But, said Seligson, “there’s no proof that it will change things 100 percent,” in terms of reinforcing students’ commitment to religious observance.

Krakowski agreed that PBL, used widely in public schools in this country, does not guarantee that students will remain steadfast members of the Modern Orthodox community when they become adults. “How it will impact identity — that’s a question on its own.”