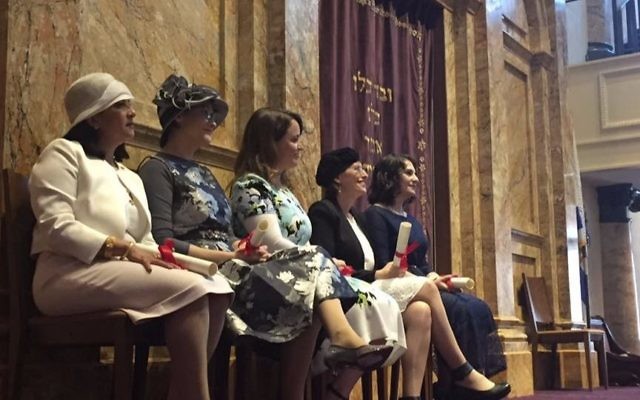 When we rose to welcome the faculty, alumnae, and advisors of Yeshivat Maharat as they marched down the aisle of Kehilat Jeshurun’s main sanctuary, I couldn’t help but be reminded of the oft-cited comparison between the Jewish people receiving the Torah at Mount Sinai and the image of a bride and groom on their wedding day. This is a comparison that before that day never really struck me, considering the just as often quoted midrash where G-d holds the mountain over B’nei Yisrael until they agree to accept the covenant. But as I watched the esteemed guests and Musmakhot walk with pride and purpose to the other side of the aisle, I finally understood what it meant to marry one’s commitment to Torah and mitzvot.

From the moment the ceremony began, every person in the room was bound in a moment of revelation. Within this covenantal community, we all renewed our vow to empower ourselves and any others who hear the call of Torah leadership. I looked up in awe at those five women who had just scaled mountains of long days in the beit midrash and constant criticism at every turn so that everyone standing there today, and every Jewish soul yet to be born, could have five more reasons to invest in b’not yisrael and have clear models for excellence in women’s talmud Torah.

For Moshe, getting to the top of the mountain was simultaneously a culmination of his journey toward becoming the leader of the Jewish people as well as the beginning of the tumultuous period through the wilderness. When confronted by the burning bush, the ultimate symbol of call to action, he doubted his own abilities, questioning both G-d and his role in the story of the Jewish people. At Sinai, he proved to himself and B’nei Yisrael that he was the one for whom they were waiting – not only the one to take them out of Egypt and free them from harm’s way, but also to instill in each of them a sense of purpose, vision, and belonging. However, as we know all too well, Moshe’s job as a leader was far from over. Even after he retrieves the Torah for the Jewish people, he still faces many challenges and threats of upheaval throughout the long journey toward Eretz Yisrael.

For these newly ordained women, this day was the end of a process and the beginning of a long journey. They heard their call to action and proved to themselves and the world that it was no accident that they were born with incredible talents for talmud Torah and communal leadership. They seized the opportunity to strive toward their potential, despite the high levels of opposition and criticism they may have internalized over the years. The ceremony also marked the beginning of their journey into the scarcely explored wilderness of Orthodox women’s rabbinical leadership, and the many challenges they will continue to face along the way.

For B’nei Yisrael, the moment of revelation was the end of a long period of second-hand status, devoid of the potential for true self-actualization. When they received the Torah from Moshe, their status as wandering refugees was elevated to that of a cohesive, mission-driven nation, with a clear cut role model and sense of obligation towards themselves, one another, and G-d.

Like many other young Jewish Orthodox women, I was presented with gender specific standards throughout my formative education for the potential of my Torah learning. Thankfully, I was given the opportunity to learn Talmud but I was never given the resources or the expectations to excel in Judaic studies the way my male peers were. I was never exposed to the idea that a Jewish woman could know as much or even more Torah than a Jewish man, let alone presented with a living, breathing example of it. Discovering institutions that do just that has felt like a journey from the directionless and yearning of Egypt to the revelation of the endlessness of my own potential at Sinai.

So a Mazel Tov is in order – but much more importantly, a thank you, to the graduating Musmakhot of Yeshivat Maharat 5777. Thank you to Rav Goldie, my mentor, Rabbi, and friend, and all of your classmates, for climbing up the mountain and taking what’s yours so that it can become all of ours. Thank you for teaching me what it means to marry the Torah out of love, honor, and commitment. Finally, thank you for allowing me to experience the joy of revelation that occurs when a Jewish woman is allowed to set her own standards.

Aliza Lifshitz is a rising sophomore at Barnard College studying Gender Studies, Jewish Studies and Economics. She is the co-President of the Jewish Activist Collective and the engagement chair of Lalekhet Partnership Minyan at Barnard/Columbia Hillel.