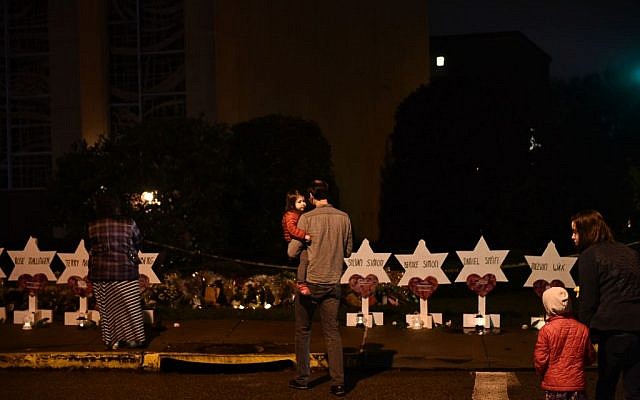 People stand in front of a memorial on October 28, 2018, at the Tree of Life synagogue after a shooting there left 11 people dead in the Squirrel Hill neighborhood of Pittsburgh on October 27. Getty Images

To call the slaughter at a Pittsburgh synagogue a ‘tragedy’ is to state the obvious. The rampage by a man who yelled “all Jews must die” as he murdered Shabbat worshippers was a tragedy for the friends and families of the 11 who died, for the police officers who were injured trying to stop the shooter, for a traumatized American Jewish community — indeed for Jews everywhere — and for a peaceful community that lost its innocence in a few terrifying minutes.

The kind of carnage that took place at the Tree of Life synagogue is never the result of a single cause or person. Mass murders have become almost commonplace in America, and no public spaces — including schools, movie theaters and houses of worship — are fully safe. Among the issues that come into play for debate are gun control, mental illness, hate groups, social media and an “Us vs. Them” climate of rage and blame that emanates from the nation’s highest office. Parsing those elements, though, is futile.

For the American Jewish community, the Pittsburgh killings represents a quantum jump in our sense of insecurity. And we are left to wonder if we must now follow European communities in requiring armed guards for our synagogues, schools and community centers. Some are asking today if the horrific murders indicate that Jews in America must now prepare for a new wave of violent anti-Semitism, while others are taking solace in the outpouring of empathy from so many of our fellow citizens of all faiths.

It’s understandable that in the wake of the killings, reactions about which societal factors are to blame and what should be done about them have put raw emotions on display. Franklin Foer, a staff writer for The Atlantic, wrote that “any strategy for enhancing the security of American Jewry should involve shunning Trump’s Jewish enablers.”

But surely the answer to anti-Semitic attacks is not to banish Jews from synagogue because we may disagree with them politically. That’s the road to a Jewish civil war, not safekeeping. We need to speak out against the elements of evil in our society without losing our humanity. For this is a time of reckoning, a time to double down on a national commitment to American — and Jewish — values of democracy and decency, of civility and compassion, seeing the dignity in all of God’s creatures. Like the 11 innocent souls who died on Shabbat morning in a synagogue called the Tree of Life.