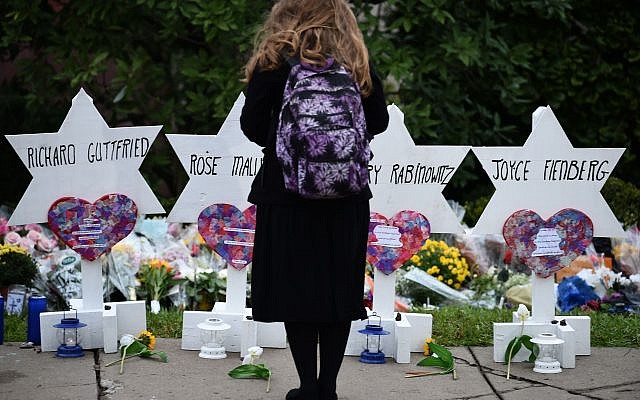 A woman stands at a memorial outside the Tree of Life synagogue after the shooting on October 27. Getty Images

Pittsburgh — Early on Monday morning, a Pittsburgh police officer stood guard at the corner of Wilkins and Murray. He directed cars away from Wilkins Avenue and the Tree of Life Congregation, the site of Saturday’s deadly shooting, which is still closed as police process the crime scene. But he also stood guard over a makeshift memorial to the victims — piles of flowers, wreaths, signs and a cluster of candles that struggled to burn through a light drizzle.

“I’ve been trying to keep them lit,” Officer Logan told The Jewish Week, a poignant gesture in a dark time.

As a weekend of agonized waiting for names of the dead to be confirmed and mourning turns into a workweek filled with funerals and shiva visits, the tight-knit Jewish community here is struggling to move on from the massacre carried out by an enraged gunman who murdered 11 people. While national news broadcasts turned to the tone of political rhetoric and President Trump’s comments about the shooting, Pittsburgh’s classical music station, WQED, offered grace notes in the midst of the heartache: It played selections from the works of acclaimed Jewish composers Ernst Bloch, Leonard Bernstein and Hannah Senesh’s “Eli, Eli” between news updates about the shooting and memorial services. 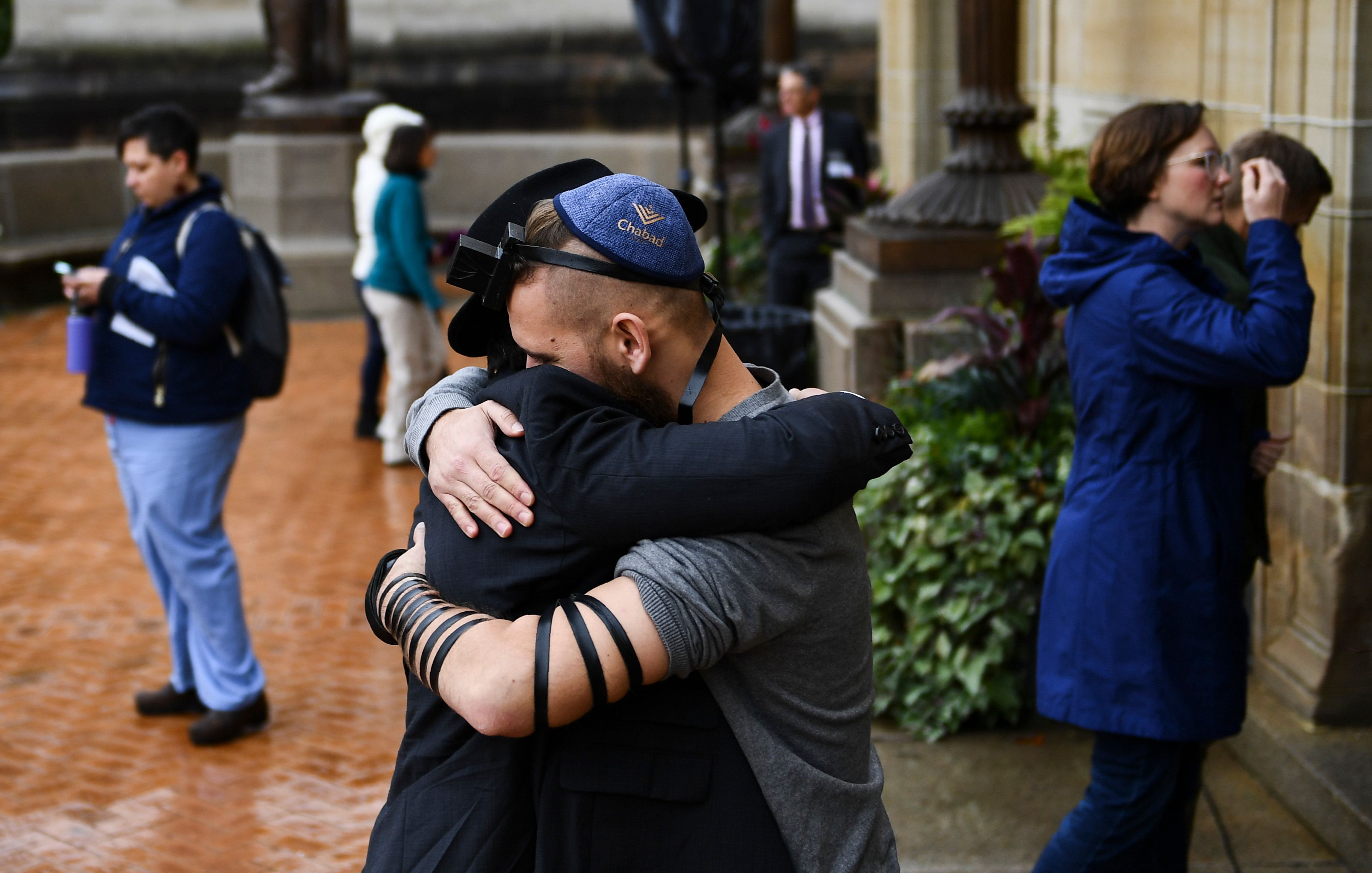 Outside the Allegheny County Soldiers Memorial people hug as they arrive for a vigil for the victims of the shooting rampage at the Tree of Life synagogue the previous day. BRENDAN SMIALOWSKI/AFP/Getty Images

At the Jewish Community Center of Greater Pittsburgh, which served as something of a crisis and command center throughout the weekend, police officers stood guard outside the parking garage and FBI agents manned the front doors. The JCC resumed its normal schedule of exercise classes and family programming this morning as it continues to serve as a hub for the FBI.

“The thing that we’ve been hearing, learning, from people who are experienced with this kind of situation is that the more normalness you can provide for folks, the better they begin to process and begin the healing process,” said Cathy Samuels, the JCC’s senior director of development and communications. “I think the normality of what we can provide will be very crucial to the community continuing to heal.”

For Rodef Shalom Congregation, there was a sense of urgency to provide support and security as nervous parents brought their children back to preschool. Parents were greeted by a newly installed security guard, as well as by the rabbis, as they entered the building. One member of the synagogue, a social worker, came to make herself available to parents. “I thought it would be nice if the rabbis showed up and were here to talk to people,” said Rabbi Sharyn Henry. “We didn’t know what to expect.” 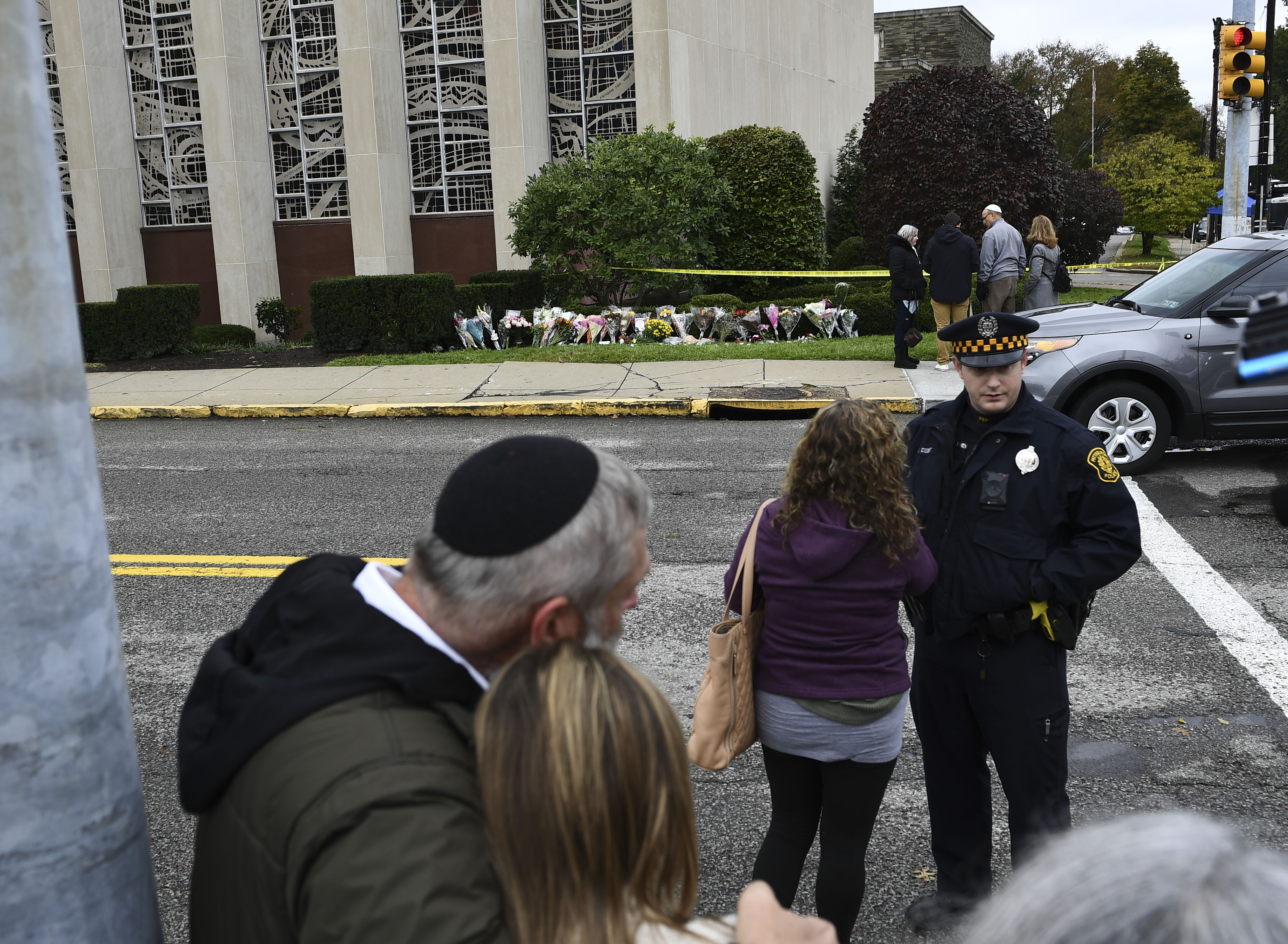 Outside the Allegheny County Soldiers Memorial people hug as they arrive for a vigil for the victims of the shooting rampage at the Tree of Life synagogue the previous day. BRENDAN SMIALOWSKI/AFP/Getty Images

Rabbi Henry ended up spending a long time with one congregant who lives outside of Squirrel Hill. When the congregant arrived at work earlier this morning, a Muslim colleague approached her offering her sympathies. “She really started to feel how this was her story,” said Rabbi Henry, who sat with her in the synagogue sanctuary.

Rabbi Dr. Ari Sytner, director of leadership and community development at Yeshiva University, went to morning minyan at Congregation Poale Zedeck in Squirrel Hill. He had come from New York on Sunday with a carload of students to offer comfort at Sunday night’s interfaith vigil at the Soldiers and Sailors Memorial Hall. The students returned to New York after the service, but Rabbi Sytner stayed to offer his services as a social worker. “A lot of folks are saying they’re fine and they’re doing OK, but they kind of nod at you and acknowledge that they’re not,” he said. “That’s part of the grief process.” 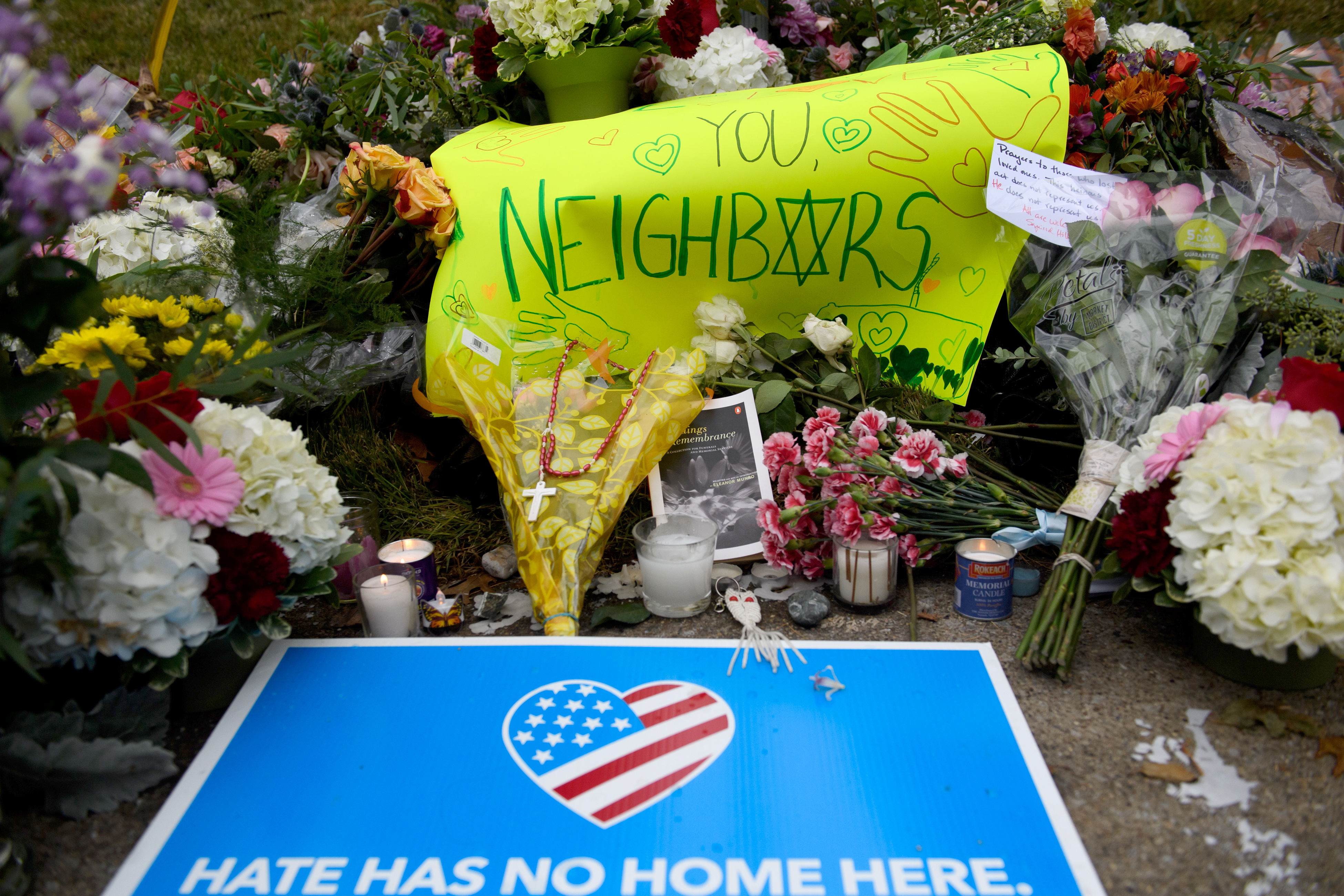 Flowers and cards sit at a makeshift memorial down the street from the site of the mass shooting that killed 11 people and wounded 6 at the Tree Of Life Synagogue on October 28, 2018 in Pittsburgh, Pennsylvania. Jeff Swensen/Getty Images

At Congregation Shaarei Torah, Rabbi Daniel Wasserman fielded dozens of phone calls from numbers he didn’t recognize. As a leader of the Orthodox Chevra Kadisha (burial society), other such leaders in Allentown, Pa., Cleveland, Rochester, N.Y., and other cities within a 300-mile radius had been reaching out to offer assistance. Until the Pittsburgh medical examiner released the victims’ bodies, the burial society kept volunteers with the bodies at all times, in accordance with Jewish law. They were also preemptive in other ways. “We were proactive in reaching out to the FBI,” said Rabbi Wasserman. “I have a meeting with them again this afternoon to see when we can bring in a crew to clean up all the blood, because that has to be buried.”

Asked why Jewish funerals are done so quickly after death, Rabbi Wasserman explained that it was necessary for the mourners. “The quicker you start that process, the quicker you can go on,” he said.

Back at Rodef Shalom, Rabbi Henry wore a necklace in which a Star of David was shown with some of its points cut off. She said the necklace represented the six million Jews murdered during the Holocaust. “I’m wearing it today because I’m feeling like our Jewish community has been cut off,” she said. “Like we’ve been broken somehow.” 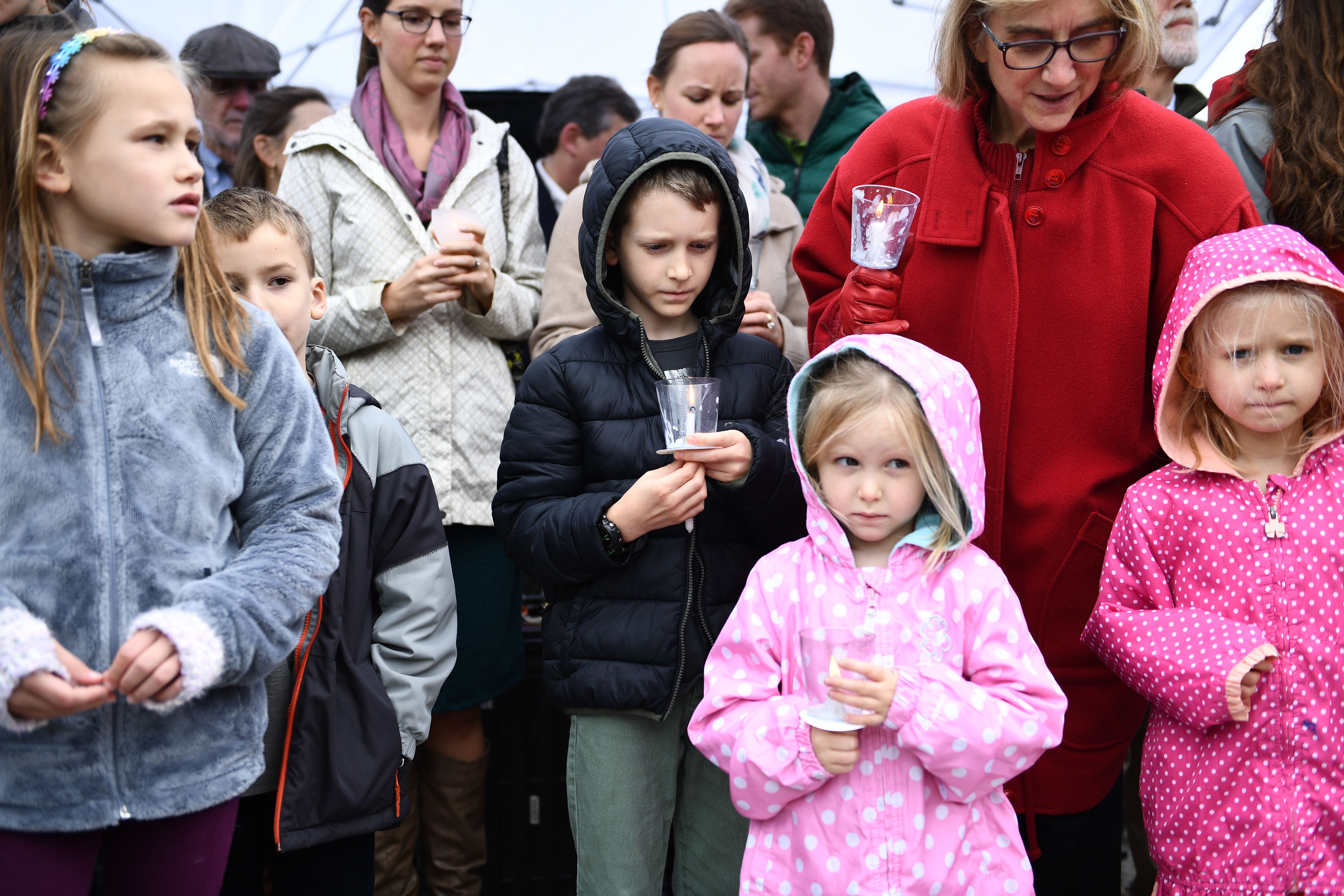 People arrive to pay their respects in front of a memorial on October 28, 2018 outside of the Tree of Life synagogue after a shooting there left 11 people dead in the Squirrel Hill neighborhood of Pittsburgh on October 27, 2018. BRENDAN SMIALOWSKI/AFP/Getty Images

She said she has been considering wearing something to identify herself as a Jew this morning, whether a kipa, which she doesn’t wear regularly, or a necklace. “I’m not ready for that yet,” she said of wearing a kipa. “But I’ll wear this today. I could have picked a different star, but I picked this one.”

Tomorrow, Jewish Pittsburgh begins to bury its dead, as it looks to heal at the broken places. The first funeral is set to take place Tuesday at noon in Rabbi Henry’s sanctuary.