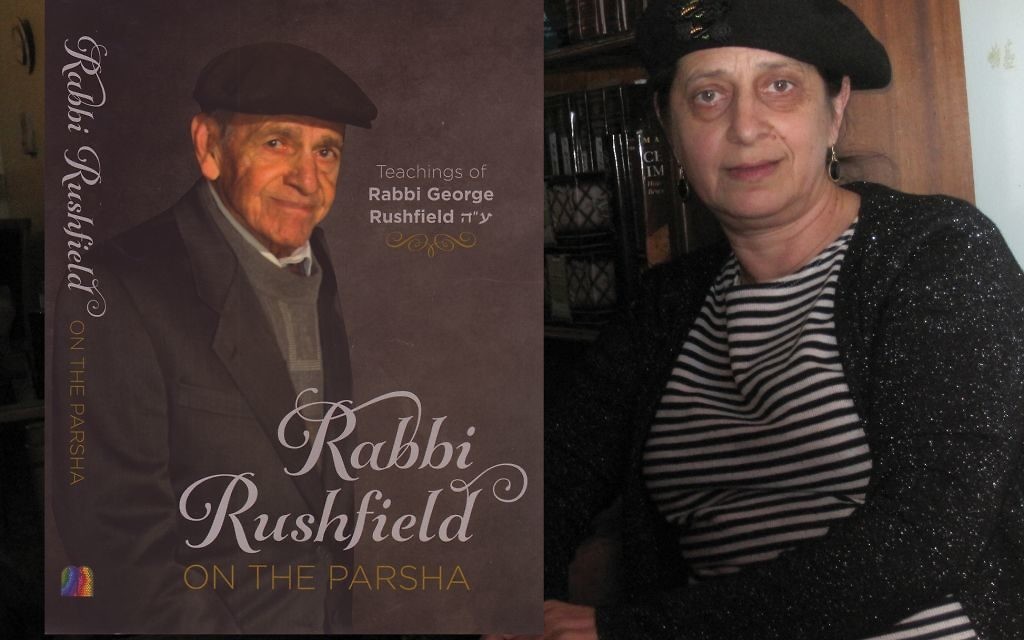 During the decades he raised a family in the Queens neighborhood of Kew Gardens Hills and worked as a teacher in several Jewish and public schools, Rabbi George Rushfield would read through his personal library of Torah commentaries to prepare a short dvar Torah lesson on the week’s parsha to share with his wife and children each Shabbat.

For many years he conducted a weekly Friday evening class on the parsha for neighbors.

After he retired a few decades ago and founded an adult education study program at his congregation, Young Israel of Kew Gardens Hills, Rabbi Rushfield would write down, in parallel Hebrew and English columns covering hundreds of pages, his collection of scattered divrei Torah as an eventual gift for his family.

“It was for his kids, as an inheritance,” said his daughter, Rebecca Wittert. “He was always working on it.”

Rabbi Rushfield died at the age of 87 two years ago last month.

The family of Rabbi Rushfield recently completed a project to share the rabbi’s Torah insights with a wider circle of people interested in Jewish study.

Rabbi Rushfield’s children — Wittert, an art restoration consultant who lives in Kew Gardens Hills, and Daniel Rushfield, an economist who made aliyah in the early 1980s — had the rabbi’s hand-written manuscript turned into a 365-page book published by Mosaica Press in Israel.

It is well known in Jewish publishing that new parsha books are a tough sell: Jewish bookstores are already filled with such books by prominent authors and community leaders. Jewish publishing firms would be unlikely to put out the book by Rabbi Rushfield, the rabbi’s children thought.

“We didn’t want it to just sit on a shelf,” as often happens to the property of parents after they die,” Wittert said.

She and her brother raised the funds for the book’s publication, supervised the editing and proofreading process and now are distributing it among the late rabbi’s circle of friends; Rebecca Wittert featured the book at a recent Chanukah event at Young Israel, to commemorate the yahrtzeit of Rabbi Rushfield and of his wife of 62 years, Rita, who died within three days of each other in 2013.

The book is part of a trend of people taking into their own hands the publishing of high-quality books written by themselves or, as in the case of Rabbi Rushfield’s children, by relatives. It’s a trend made possible by the growing availability of affordable publishing technology, and made necessary by established publishing houses’ increasing reluctance to invest in printed books in an era of e-readers.

The rabbi’s book is also part of a movement that children, spouses and other survivors are spearheading to honor a deceased person’s memory in unique ways that reflect the person’s life. In “The Living Memories Project” (Little Miami Publishing Co., 2014) Jewish Week staff writer Stewart Ain and two co-authors document such recent memorial projects as a museum exhibition, a camp for the survivors of terrorism victims, and musical compositions.

That book, fittingly, was the outgrowth of a quest by Ain’s wife, Meryl, an educational administrator, to memorialize her deceased parents. She also established a scholarship fund named after her father.

“The idea of keeping alive those who remain important to us even in death is firmly rooted in various cultures,” she and her brother, Arthur Fischman, write in their book’s introduction. “El Dio de los Muertos [the Day of the Dead], for example, is a centuries-old annual celebration in which many Mexicans remember departed loves ones with rituals that include the building of altars and decoration of graves. Through the ages, other cultures — including those in Egypt and Indonesia — have observed their own rituals to honor the dead.”

Following the broader trend, publishing the writings of deceased relatives is becoming common in Jewish circles, said Daniel Levine, owner of J. Levine Books & Judaica in mid-Manhattan. “I’m hearing it more and more,” he said, noting that exorbitant printing costs used to be the main obstacle. “A generation ago, you could not do it.”

Rabbi Rushfield’s divrei Torah translate well onto the printed page, written in an erudite-but-accessible style. He largely based his own thoughts on “Ma’ayanah shel Torah” (“Wellsprings of Torah”), a 1937 anthology of commentaries from a wide range of authorities compiled by Rabbi Alexander Zusia Friedman, a Polish-born scholar and communal leader who was interned in the Warsaw Ghetto and died in the Holocaust.

For each Torah portion the rabbi cites a question and answer from “Ma’ayanah shel Torah,” and often supplements it with his own insights.

Rebecca Wittert inherited the pair of bulging loose-leaf notebooks in which her father, sitting at his dining room table, would write and revise his thoughts on the parsha.

Neither she nor her brother had any contacts in the publishing business.

Then, at just the time Wittert started to think about finding a publisher, she read an email message — written to the leader of a small Manhattan congregation who had recently died; Wittert supervised the congregation’s email correspondence as a favor to the un-tech-savvy leader — from Rabbi Yaacov Haber, the Buffalo-born founder of Mosaica Press (mosaicapress.com), based in Ramat Bet Shemesh, between Tel Aviv and Jerusalem.

In the message to prospective authors, Rabbi Haber, offered “to develop your manuscript/ideas/blog/posts/emails into a beautiful and important book.”

“We get a bunch of handwritten notes” like Rabbi Rushfield’s and turn them into a professional-looking book said Rabbi Haber. “It was important to him. It’s important to us. He had something important to say to this generation.”

Spiritual leader of a congregation in Ramat Bet Shemesh and author of several books, Rabbi Haber founded Mosaica Press four years ago. The firm has issued about 30 titles so far, with an equal number in the works.

More than “a printing press,” which the so-called vanity press field was for many years, co-publishing businesses like Mosaica Press devote much time to a book’s editing and graphics, Rabbi Haber said.

“The timing was so fortuitous I had to see the hand of God in it,” Wittert said, sitting in her living room, a few blocks from the home of her late parents.

To co-publish 1,000 copies of her father’s book, she and her brother would need to raise $13,000; they sent out some 150 letters to friends of Rabbi Rushfield, mostly current members of Young Israel and some people who had moved out of town.

“We figured we would raise only half” of the required amount – “if we were lucky,” Wittert said; she and her brother would have to find the remainder elsewhere. Within a few weeks, checks started coming in, “from almost everyone.”

“A number of people gave $500,” Wittert said. Others donated three-figure amounts. In the end, Wittert and her brother raised $3,000 more than their goal.

“I was shocked,” Wittert said. “I never realized how much they loved my parents.”

The excess funds will be used by Mosaica Press to support the work of another author who can’t afford to pay for his or her own book to be published, Wittert said.

Rabbi Fabian Schonfeld, longtime spiritual leader of Young Israel of Kew Gardens Hills and a friend of Rabbi Rushfield for more than a half-century, said he is not surprised. “His humility was as great as his knowledge,” the rabbi said, adding that the “profound” insights in the book “reflect his personality.”

The cover of Rabbi Rushfield’s book features a picture of him wearing a gray knit sweater, a black flat cap upon his head. In a neighborhood that had turned black hat during his decades there, Rabbi Rushfield, a native of the once-heavily Jewish East New York section of Brooklyn who was ordained by Yeshiva Rabbi Chaim Berlin, remained clean-shaven, an Orthodox scholar who did not take on the trappings of his adopted Queens neighborhood.

Wittert and her brother have given out copies of the book to the people who contributed to its publishing; the remaining ones are available for the cost of postage, but a donation is suggested to the Young Israel’s Chevrah Kadisha, for which the rabbi served as treasurer for many years. (Wittert can be reached at wittert@juno.com.)

What would Rabbi Rushfield think of his children’s publishing project?

“He would be upset that this wasn’t his final version,” Wittert said — the rabbi, who was in poor health for a few years before he died, had not completed his revisions.

“He would be pleased,” she added, that Rabbi Rushfield’s children “have taken his Torah” and made it available to a greater number of people.

Wittert said she has not read the book yet. It would be too emotional. She does not need to read her father’s divrei Torah. “I heard them,” she said. “I lived it.”