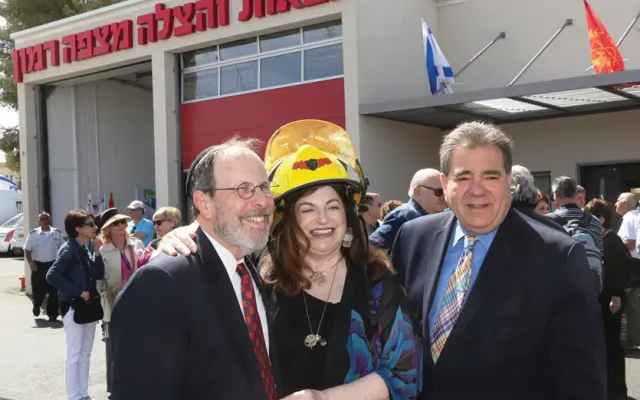 Stephen and Penny Rosen, left, with JNF-USA's CEO, Russell F. Robinson, at an event in Israel. (Courtesy of JNF)

A fire station in the northern Jewish-Arab city of Ma’alot Tarshiha donated by Brooklyn couple Penny and Stephen Rosen has continued to keep Israelis safe as fires raged in Israel’s north last weekend. Twenty-six fire crews responded to a large-scale brushfire in the Hacienda Forest while over one hundred houses were evacuated.

The Rosens donated the state-of-the-art fire station through Jewish National Fund-USA in memory of their late son, Adam, as part of their ongoing philanthropic support for the land and people of Israel.

“We are saddened to hear of another fire in the Hacienda Forest,” said JNF-USA Fire and Rescue Task Force Co-Chair, Penny Rosen. “However, we are also proud that the fire and rescue station that my husband, Stephen, and I built in our beloved son Adam’s memory was in place to respond. These devastating fires are a stark reminder as to why we need to keep building and helping equip as many areas in Israel as possible with modern firefighting equipment.” 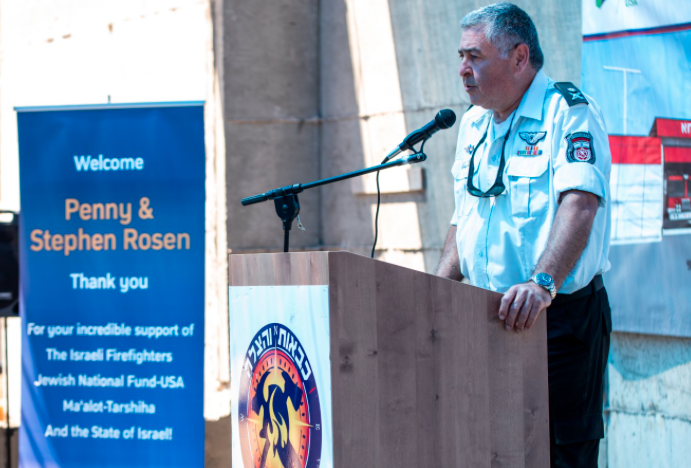 Spokesperson for Israel’s Fire and Rescue Authority, Alon Mazar added that despite popular belief, summer is not necessarily the peak time for fires. “Spring and Fall are in fact the most dangerous times of year for the rapid spread of fires. For example, in 2010 we had the Carmel disaster and again in 2016, the Carmel region had another major fire. Then, in 2019 we had large fires in Mevo Modiin. All three events that were not in the summer. May, November, and December. In our case, they are the most dangerous seasons that are characterized by winds coming in from the East – strong winds that do not come from the sea. They are eastern winds from the interior of the country – and are characterized as dry and strong. It is enough to turn a small fire into a major catastrophic event.”

And while the winter months may see fewer fires, Israel’s Fire and Rescue Authority along with volunteer firefighters are already getting ready for the summer months. “We are updating our plans and preparedness in cooperation with the government and relevant authorities,” said Head of Security for Israel’s Eshkol Region, Ilan Isaacson. “And thanks to Jewish National Fund-USA (JNF-USA), we have the equipment that we need to reduce our response time to fires as well as the tools to effectively fight fires.”

Although the cooler months have arrived, JNF-USA’s partners (donors) and ambassadors (lay leaders) are continuing to attract philanthropic support for Israel’s fire fighters. Through its Fire and Rescue Task Force, the organization has been a primary partner to the Israel Fire and Rescue Authority—outfitting Israel’s firefighters with state-of-the-art lifesaving equipment such as oxygen tanks, fire-retardant suits, firefighting vehicles, and fire station facilities.

The organization has also invested in enhancing and rebuilding Israel’s Volunteer Fire Fighter program, which trains and provides safety equipment and gear to volunteers who serve as the first line of defense in the remote communities of northern and southern Israel that are difficult for authorities to reach in times of emergency.

JNF-USA is the leading philanthropic organization for Israel that supports critical environmental and nation building activities in Israel’s north and south. Through its One Billion Dollar Roadmap for the Next Decade, JNF-USA is developing new communities in the Galilee and Negev, connecting the next generation to Israel, and creating infrastructure and programs that support ecology, individuals with special needs, and heritage site preservation.

This is a Paid Post. The New York Jewish Week had no editorial role in its production.