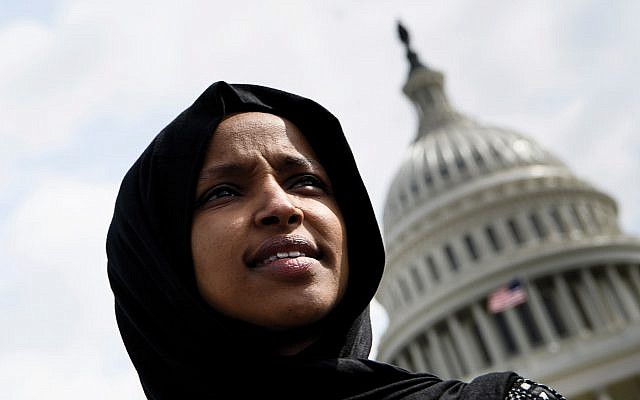 Freshman Democrat Ilhan Omar of Minnesota stressed in this week’s opinion article that Israel is the “historic homeland” of the Jews, but some Jews remain skeptical that it marks a change of heart. Getty Images

She hit upon third-rail stereotypes so sensitive to the Jewish community that they seemed lifted from medieval tracts or BDS manifestos: Jews aren’t loyal to the country they live in, they buy off politicians and Israel “has hypnotized the world” into overlooking its “evil doings.”

And along the way, in only a few months’ time, Ilhan Omar, the freshman Congress member from Minneapolis with the stylish hijabs, has become a lightning rod.

For many of those on the Jewish right, she is a vivid symbol of all that’s wrong with the Democratic Party when it comes to Israel — that progressives like her are pushing the party too far left in their criticisms of the Jewish state. Her Jewish colleagues in the House blasted her tweets about Jews and money, dual loyalty and AIPAC’s hold over politicians as anti-Semitic. And some of her Jewish supporters back home in Minnesota’s diverse 5th Congressional District began to distance themselves from her.

Yet, some Jewish progressives stood by her, arguing that she was being singled out for being Muslim and an immigrant, that the real anti-Semitism was coming from the white supremacist right and that her views on the Israeli-Palestinian conflict and the role of money in politics deserved a wider hearing in a Congress they believe is blindly pro-Israel.

The reaction to Omar is perhaps indicative of battles to come in Congress over Israel as some members of the new freshman class flex their progressive muscles.

Now, after issuing several apologies for tweets deemed beyond the pale, and then seeming to double down with others that appeared equally anti-Jewish, Omar sought to clarify her views. She did so not in a tweet but in an op-ed Monday in which she said she believes Israel is the “historical homeland” of the Jews and that she supports “internationally recognized borders, which allows for both Israelis and Palestinians to have their own sanctuaries and self-determination.”

Not surprisingly, the reaction to her op-ed, which appeared in the Washington Post, points to the community’s growing fault lines. It was welcomed by some and criticized by others as being disingenuous.

“I think it’s a first step,” said Michael Koplow, policy director of the Israel Policy Forum, which supports a two-state solution. “It’s nice that she says all the right things in the op-ed. It’s an important step and I’m glad she acknowledged Israel and its rights and that there should be two states. But at this point she has sent enough mixed signals that it is more important to see if she maintains this line going forward.”

“I hope this is a new policy from her rather than an aberration,” he added.

And Jessica Smith, chief operating officer of J Street, said in an email, “I do think it was an important gesture that Rep. Omar underscored both her appreciation of the Jewish people’s connection to our historical homeland, and also her strong support for a two-state solution to end the Israeli-Palestinian conflict. She also expresses that she understands the plight of the Jewish people, as she is an immigrant and refugee herself.”

But Malcolm Hoenlein, executive vice chairman of the Conference of Presidents of Major American Jewish Organizations, said she did “not address the real issues, which are her anti-Semitic and libelous charges that question the loyalty of the Jewish community and the integrity of members of Congress, as well as impugning the motives of pro-Israel Americans who recognize the importance of the relationship” between Israel and the U.S.

Morton Klein, president of the Zionist Organization of America, said that some of her assertions in the op-ed are incorrect.

“She wrote that Israel is also the homeland of the Palestinians, but that is false,” he said. “This is wholly Jewish land. And she is demanding a two-state solution while ignoring the fact that the Palestinian Arabs turned down extraordinarily generous offers of a Palestinian state by both [former prime ministers] Ehud Barak and Ehud Olmert on approximately 95 percent of the West Bank, big chunks of Jerusalem and even more land from Israel proper. They were rejected. There was no counter offer. Olmert personally told me that [Palestinian President Mahmoud] Abbas refused to take his phone calls after he made the offer. Why didn’t Omar comment on that?”

Jeff Dunetz, a conservative commentator and publisher of The Lid blog, said Omar’s op-ed “might work for a while” but that the “Democratic Party has been becoming the anti-Jewish party for more than a decade” and that Democratic “Jews in Congress are covering up the problem.”

Rabbi Shlomo Riskin, founding rabbi of Lincoln Square Synagogue in Manhattan and of the Israeli settlement of Efrat in the West Bank, told viewers on the Jewish Broadcasting System last week that “the Democratic Party is turning very much against the Jewish people. Allowing one of the worst kinds of anti-Semitic canards to come out of the mouth of a young representative of the Democratic Party – Omar – who is very much against the Jewish people; and she has never really in any way been censured by her party.”

But Rabbi Jill Jacobs, executive director of T’ruah: The Rabbinic Call for Human Rights, insisted the op-ed “puts to rest any question about whether Rep. Omar will support decades of U.S. policy that supports a two-state solution. The real question is whether the Trump administration, which has been pursuing a policy of erasing the Green Line and of making conditions more difficult for Palestinians — all in a way that makes peace more difficult to achieve — will do the same.”

And Seymour Reich, former chairman of the Presidents’ Conference, said he saw the op-ed as Omar’s attempt to “reach out” and “heal [in an attempt] to show she is not blindly critical of Israel. But the proof will be in the pudding. Let’s see what she says extemporaneously rather than just what she says in a carefully crafted piece in the Post. … I hope she understands the concerns of American Jews on the issue of dual loyalty and the importance of Israel to American Jews.”

On the other hand, Farley Weiss, president of the National Council of Young Israel, said Omar’s support of the BDS (boycott, divestment and sanctions) movement demonstrates that she is “anything but neutral” regarding Israel.

“She lied during the campaign when she said she did not support it, and then after she was elected she said she did,” Weiss said. “Her policy position supporting BDS is anti-Semitic.”

The “world view of the BDS movement,” according to Dan Diker, senior project director at the Jerusalem Center for Public Affairs, “is to rid the world of the one and only Jewish state. BDS is anti-Semitic because it calls for the elimination of the nation state of the Jewish people.”

In a conference call with the Endowment for Middle East Truth, Diker said of Omar’s op-ed, “She has good speech writers. I’d like to see her say [Israel] is the nation-state of the Jewish people and that it should live in secure and recognized boundaries. … I don’t think her observations about Israel come from a political but an ideological standpoint. I would like to see her affirm what she has written.”

And Rabbi Abraham Cooper, associate dean of the Simon Wiesenthal Center, said of Omar: “This is an ignorant person who has never been to Israel and has a certain world view that is an anti-Semitic world view. It is the Jewish people who are the indigenous people of the Holy Land. … Everywhere you turn, the Palestinians and their allies want to erase that.”

Holding one of those signs was Hillary Barr, who the next day said she had read Omar’s op-ed and dismissed it as “the same nonsense. This person, who has made repeated anti-Semitic statements, should not be on the Foreign Affairs Committee. It’s outrageous. I don’t want someone full of hate and prejudice to be sitting on a committee like that.”

He criticized Congress and its 28 Jewish members who “couldn’t get together” to craft a resolution condemning Omar for her comments and instead passed a “kitchen sink resolution which means nothing.”

Asked on Monday about Omar’s op-ed, Wiesenfeld replied, “Anyone confronted by an enemy like this who would be gullible enough to buy this garbage is an idiot.”

Earlier this month, Jewish and Muslim House Democrats met privately in a bid to “foster tolerance” in the wake of Omar’s comments, according to the Washington Post. It reported that at that meeting Rep. Dean Philips, a Jewish Democrat from Minnesota, called on Omar to apologize and said the group should publicly affirm Israel’s right to exist and defend itself.

At one point, Tlaib spoke of her Palestinian family’s experiences in the West Bank and started crying while telling Philips that her grandmother “would treat you like a grandson.”

The Post said Tlaib and Omar declined to comment on the meeting and that the group plans to continue to meet.

Meanwhile, Adam Milstein, a major pro-Israel funder who was set to moderate a panel on anti-Semitism at next week’s AIPAC policy conference, has withdrawn because of the backlash generated after he tweeted that Omar and Tlaib are both representatives of the Muslim Brotherhood, an Islamic group affiliated with the terrorist group Hamas. He provided no proof and later said his views had been “mischaracterized.”