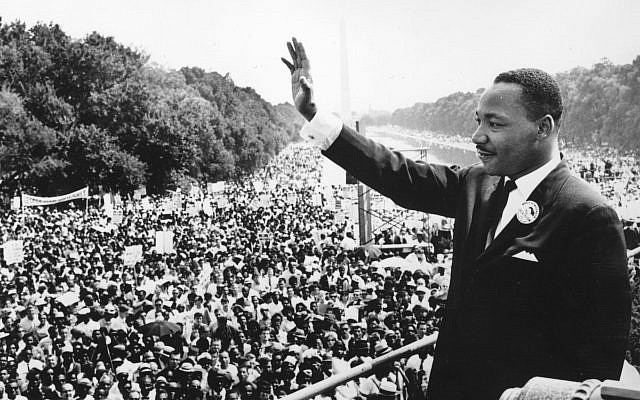 Black American civil rights leader Martin Luther King (1929 - 1968) addresses crowds during the March On Washington at the Lincoln Memorial, Washington DC, where he gave his 'I Have A Dream' speech. Getty Images

As the nation prepared to celebrate the legacy of slain civil rights leader Martin Luther King, it was particularly disturbing to see his name invoked in a screed against an Israel that Dr. King identified with the struggles of his own people.

Don’t get us wrong: While some Israel critics oppose the very notion of a Jewish state, many others — including legitimate and important voices in our own community — express strong opposition to policies they believe jeopardize the very future of an Israel they cherish.

But writing on Sunday, New York Times columnist Michelle Alexander chose the route of rhetorical overkill and epic oversimplification. Hers was a contribution to unproductive debate and to the hyperbolic, ears-closed shouting that increasingly defines our political dialogue.

The conflict remains one of the world’s most complex, but Ms. Alexander sees only one culprit: an immoral, uncaring Israel. She blithely ignores rejectionist Arab leaders, Palestinian terrorism aimed at Jewish civilians and a dysfunctional Palestinian leadership, regional inciters such as Iran and the terrorist groups Hamas and Hezbollah, all of which continue to play a major role in perpetuating the conflict.

Ms. Alexander decries what she describes as silence on “one of the great moral challenges of our time: the crisis in Israel-Palestine.”

Silence? Hardly. Few issues are more frequently debated in various public forums — and on the pages of major newspapers like The New York Times — than the seemingly intractable Middle East conflict.

Congress and every recent U.S. administration have been overwhelmingly pro-Israel in large part because Israel’s backers have done a far better job of convincing policymakers that support for Israel is in this country’s national interest. A strong and secure Israel is all the more vital in a region where leaders continue to stoke Israeli-Palestinian conflict to serve their domestic political needs.

Israel, a robust, churning democracy, with all that implies, is hardly perfect. And there are elements in our own community that go too far in labeling all criticism as hatred of the Jewish state. But portraying the ongoing conflict as the fault of Israel alone, ignoring the fact that more than 20 percent of Israel’s population is comprised of Palestinians with full rights, and claiming vast dark conspiracies to repress criticism are not only wrong but additional impediments to productive discussion and debate.

Ms. Alexander’s voice adds more noise but little insight, doubly so because of her unfortunate invoking of Dr. King, who in addressing the Rabbinical Assembly of the Conservative movement in 1968, said: “Israel is one of the great outposts of democracy in the world and a marvelous example of what can be done, how desert land can be transformed into an oasis of brotherhood and democracy. Peace for Israel means security, and that security must be a reality.”

Ms. Alexander chose to speculate that Dr. King would feel very differently today, but his words are as true now as they were more than 50 years ago.