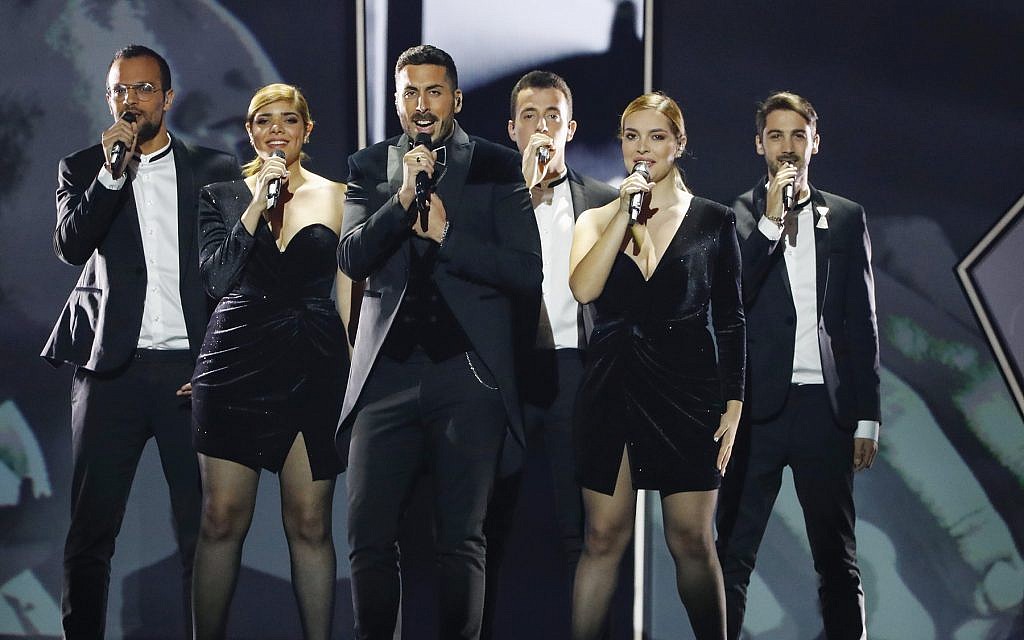 Israel’s Kobi Marimi rehearses this week in advance of the 64th edition of the Eurovision Song Contest in Tel Aviv. Jack Guez/AFP/Getty Images

Jerusalem — On Saturday night, an anticipated 200 million people will tune into the 2019 Eurovision Song Contest, a glitzy, campy extravaganza that could compete with the Met Gala in the dubious taste department.

But for a small, embattled country in a rough neighborhood, tacky in this case is the ticket to legitimacy — and to a spike in foreign tourism.

For the third time in the contest’s 63-year history, the event will take place in Israel. (The winning country from the previous year plays host; Israel won a fourth time but declined to host the event that year.) And Israelis are especially gratified to be hosting this time around, given the boycott, divestment and sanctions (BDS) movement’s massive campaign to dissuade European artists from performing in Israel.

In addition to the usual calls for boycotts by Roger Waters and the like, BDS activists have been tweeting videos of Palestinian children begging artists not to perform in Israel. Their pleas have failed: The vast majority of Eurovision countries have sent representatives to Israel. Madonna is also defying boycott demands.

“I’ll never stop playing music to suit someone’s political agenda nor will I stop speaking out against violations of human rights wherever in the world they may be,” the singer said in a statement to Reuters. 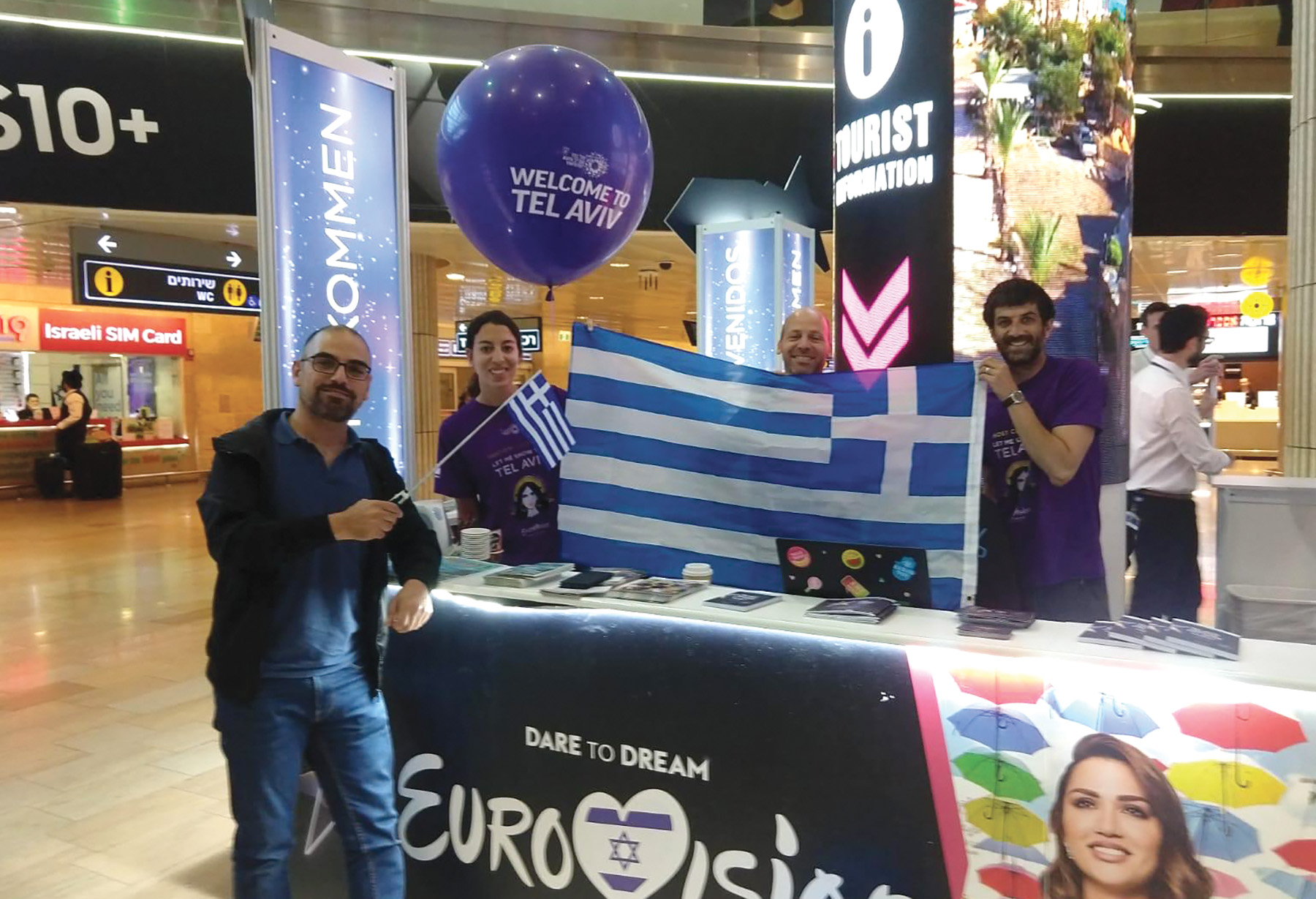 However, Israel did agree to switch the venue from Jerusalem, which the international community considers occupied territory, to less-controversial (and better equipped) Tel Aviv. And Israel’s cease-fire after the recent clashes with Hamas and Islamic Jihad in Gaza was said to have been influenced by the looming Eurovision event.

Internal politics also put the contest’s Israel venue into jeopardy. Charedi lawmakers threatened to bolt the government if any part of the contest took place on Shabbat, but Prime Minister Benjamin Netanyahu — who championed the contest as important to Israel’s image and tourism — held his ground and allowed Shabbat rehearsals when the program’s host, the Israel Broadcasting Union, refused to reschedule the rehearsals.

The Eurovision’s Tel Aviv venue is benefitting not only tourism, but the city’s image, observers say. Shayna Weiss, an expert on Jewish culture, said it would be a mistake to underestimate Eurovision’s significance.

“Cynics criticize the festival as a cheesy competition with bad music and outrageous costumes and mock its naïve sentimentality,” Weiss wrote in the Jewish Review of Books. “But not taking Eurovision seriously or ignoring it altogether means ignoring the power of cultural politics and performance.”

Weiss, associate director of the Schusterman Center for Israel Studies at Brandeis University, called the event “a deeply political activity disguised as a campy contest that hopes to transcend those very politics.”

For Israel, being part of Eurovision “is a way of asserting its identity as a member of the community of nations,” Weiss said.

“Europeans are ambivalent about Israel and the Jewish people, and Israelis are haunted by questions over Israel’s legitimacy, over whether Israel is the correct and legitimate place for Jews to have a country,” Yair told The Jewish Week.

The fact that Israel has won four times — only Ireland and Sweden have been this successful — “is truly a stamp of legitimacy,” he said.

Thanks to Eurovision, Israel has been able to brand itself as a liberal country, Yair said.

“Israel has succeeded in promoting itself as a very liberal democracy by European standards,” he said. “The gay community in particular has embraced Eurovision,” in no small part due to Israel’s decision to field Dana International as the country’s 1988 Eurovision contestant.

Dana, whose legal name is Sharon Cohen, was assigned male at birth but came out as transsexual when she was a teenager.

Barzilai, whom Yair described as “obese,” is far from the ultra-slim performers who usually grace the Eurovision stage. Known for her exuberance, originality and kind heart, she has become a hero to Israeli children and teens who feel they don’t fit in with their peers. 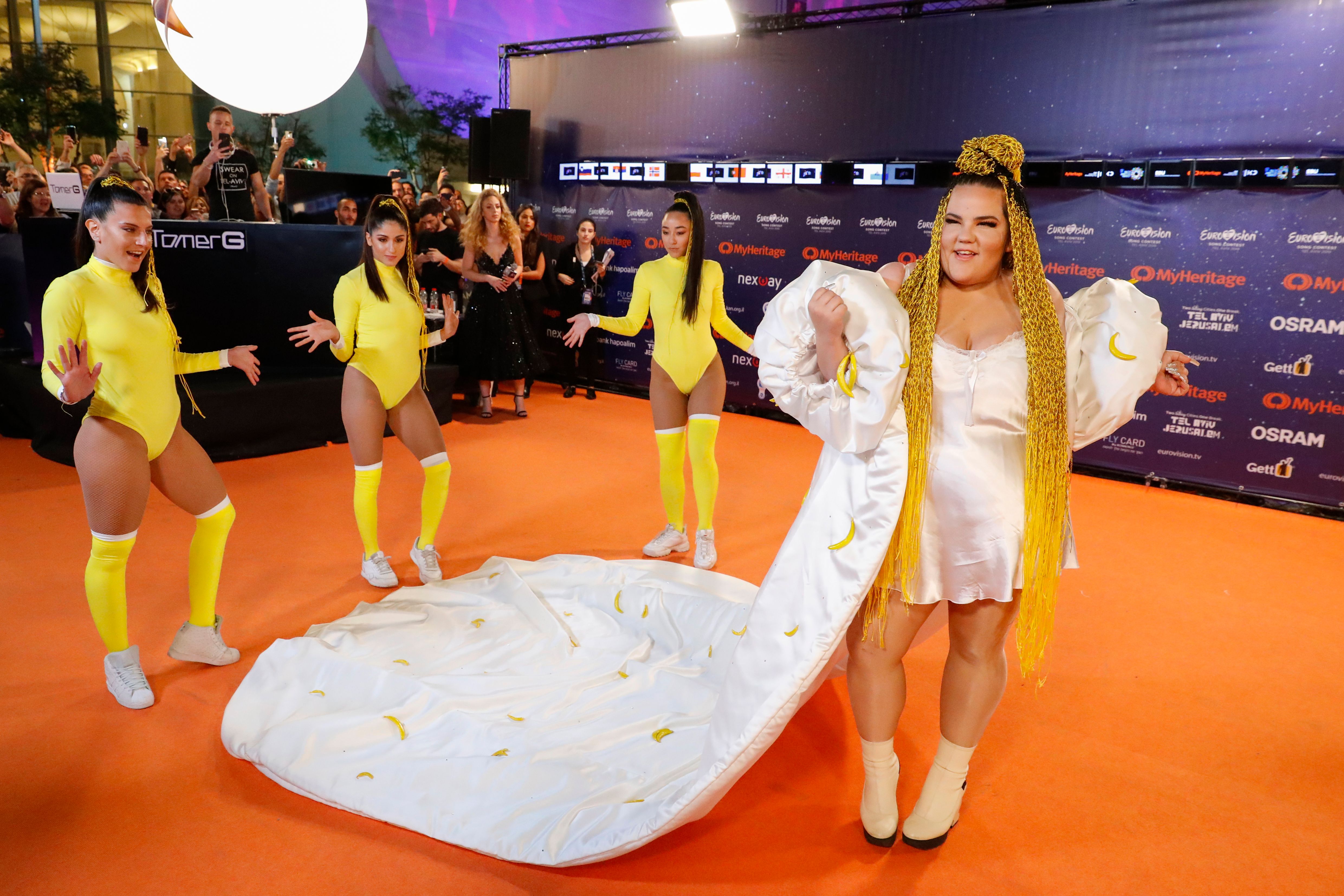 Israel’s Netta Barzilai, the winner of last year’s Eurovision contest, poses for a picture during the Red Carpet ceremony of the 64th edition of the Eurovision Song Contest 2019 at Expo Tel Aviv on May 12, 2019 in the Israeli coastal city. Getty Images

The decision to choose Barzilai as Israel’s representative “sends the message that Israel accepts all kinds of people,” Yair said.

According to Yair’s research, Israel — like host countries before it — should see a rise in European tourists during the year following Eurovision. That’s because the Eurovision broadcasts will be full of pleasing imagery, from nature and culture to night life and LGBTQ-friendly gatherings.

“They will have an effect not only on the people who have come for the event. It should have a lingering effect,” Yair said.

Israel’s Ministry of Tourism has capitalized on the event by holding a series of activities, and has organized tours for performers and the hundreds of journalists who flew in for the extravaganza. The ministry circulated photos of the journalists visiting the Dead Sea, covered in the region’s mud, which is said to have medicinal value.

“We care about what other people think of us. We want to show the beautiful face of Israel,” he said. “We’re a very small country and I often feel we’re not on the map. Thanks to Eurovision, we’re on the map.”