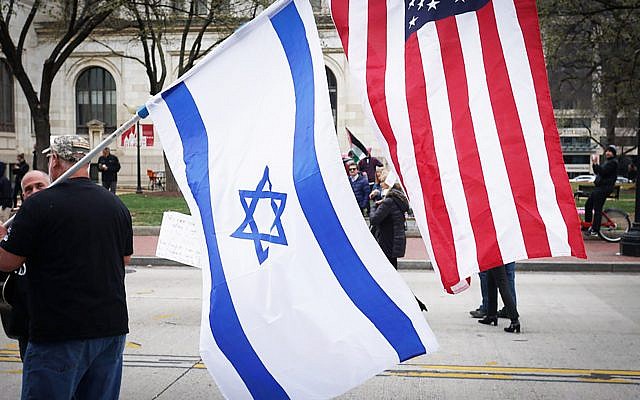 Truth is, the event I was planning to cover for this column fell through. By the time I arranged to attend, instead, the fourth annual gala of the New York chapter of Israeli American Council last week, there were no seats left: I’d have to find someplace out of the way to stand, the organizers told me. I spent an hour hunting down a cab in the rain, arrived at Chelsea Piers on time but wet, hungry and severely underdressed, and slunk to the back, where, by a stroke of sheer luck, I found a seat by the guy operating the teleprompter.

Eduardo was, as far as I was concerned, the most important person in the room, since he could feed me the lines of the bigwigs onstage before they even spoke them. We cut a deal: he’d share the text on his screen, and I’d share the food on my plate (if I could score one, that is).

But that’s my own story, and while I’m indeed an Israeli-American, it really has nothing to do with the IAC gala, which is the story I was there to cover. Self-titled “the fastest growing Jewish-American non-profit organization,” IAC is the country’s leading Israeli-American organization. Over the past dozen years, it has spread across the U.S., grooming local Israeli-American initiatives to create a cadre of life cycle programs centered on Hebrew language, Israeli culture, Jewish values and local community building. Its work is largely credited for molding the once-scattered Israeli-American populace into a viable community, one with considerable financial and political chops. Its story is one of a communal coming-of-age, of a people pulling together and finding its own voice and place in the world.

IAC’s story is not my own. Being that the group champions the government of Israel — “always, proudly … unequivocally,” as one of its primary backers, Republican mega-donor Sheldon Adelson, once put it — and I am vociferously opposed to policies of said government, I never felt entirely at home with it. Particularly over the past two years, as Israel veered more sharply to the right. Unintentionally, quietly, I drifted apart from the organized community and its doings.

But back to the gala. The theme was “Dream Big,” but the most recurrent topic was anti-Semitism. Ofir Dayan, daughter of Dani Dayan, the consul general here, spoke about the radicalization that she, as a political science student at Columbia, sees on campus. “I hear a lot of lies … and this kind of anti-Semitism doesn’t just go away,” she said, suggesting anti-Semitic and anti-Israel sentiments are one.

The importance of embracing and practicing Judaism — as opposed to passively (and often begrudgingly) absorbing it from the state, as the largely secular Israeli audience was no doubt used to doing — was highlighted in response. “If we as Jews are going to thrive and survive, it is only by our being Jewish … participating in Jewish events such as those offered by the IAC,” said gala chair Jonathan Leader. Eitanim, IAC’s flagship, project-based program for middle and high school students, was said to fortify the future generations by imbuing teenagers with “Israeli and Jewish values … and a sense of belonging to a bigger story — the story of peoplehood and the Jewish homeland,” said IAC co-founder and CEO, Shoham Nicolet. The guest of honor, Israeli billionaire Morris Kahn — whose company, SpaceIL, launched the first Israeli spacecraft to the moon — spoke about combating anti-Semitism through acts of philanthropy and entrepreneurship. But as often happens at these events, it wasn’t the big name that packed the biggest punch.

“I’ve been living in Forest Hills for 16 years; there was a large Israeli population in Queens but never a community,” recalled Avital Gross, a single mother. Shishi Israeli, IAC’s Shabbat program, she said, provided a focal point for local families to begin gathering around. But then: “In February 2018, my 6-year-old boy Yuval was diagnosed with cancer. … Facing this diagnosis was unimaginable, and facing it in a country far from home, without any family, was unbearable.” On their own accord, Shishi Israeli attendees organized to provide mother and son with financial aid, home-cooked meals, care and encouragement, and kept it up even after Yuval went into remission.

“IAC is not a charity organization — we did not orchestrate that,” Nicolet clarified, in a brief interview during the gala. “The people did that on their own. It’s the power of a community”

“The IAC is a catalyst of community building through its programs,” he added later by phone. “The community is a living entity that grows around them organically. You keep feeding it ideas, tools, values, vision, traditions, programs, and at a certain moment all those abstract things come together in the form of one mom, for whom the community was everything.”

Back behind the teleprompter controls, both Eduardo and I teared up. “Wow, I wish I was part of your community,” he said, admiringly, after Gross left the stage.

“Me, too,” I replied. Just then, someone came over to offer me a meal. Eduardo and I shared it, as promised.