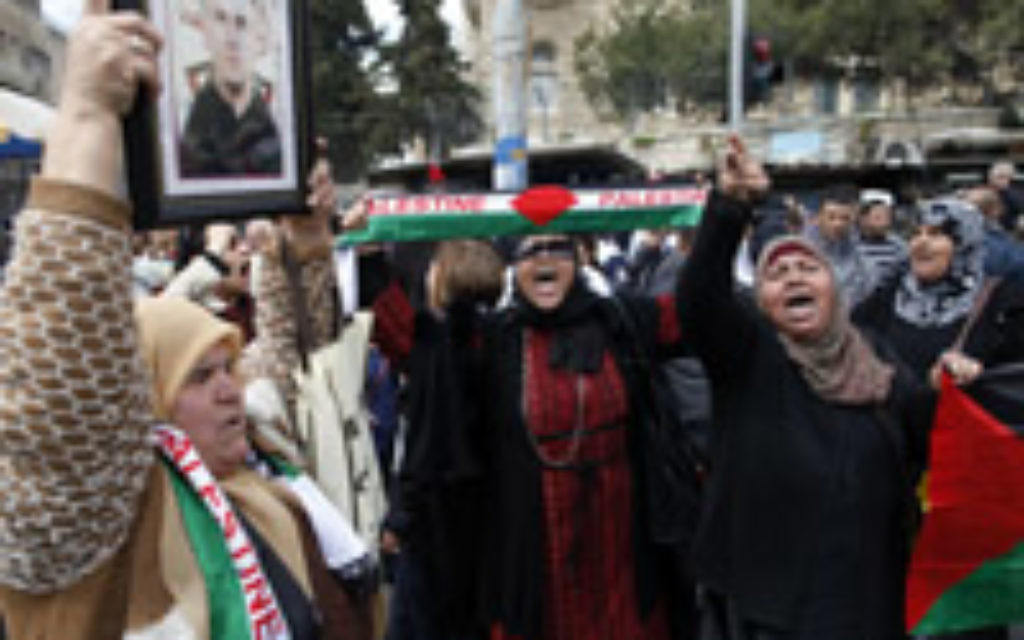 Jerusalem — Just as he does every day, on March 30 Mahmoud Abu Sneineh trimmed succulent pieces of lamb off a vertical spit, wrapped them in a fresh pita brushed with tehina, and served the shwarma to hungry customers lined up at his eatery in east Jerusalem.

Every so often, Abu Sneineh glanced at the TV mounted on the wall and listened to news about Land Day and the scheduled March on Jerusalem.
While one Arabic channel displayed images of Palestinians clashing with Israeli forces at checkpoints, and a broadcast from Jordan, where 15,000 people held a sit-in, an analyst on another channel noted that the turnout for the annual demonstrations, which Arabs call Israel Land Expropriation Day, attracted much smaller crowds than anticipated both on Israel’s borders and abroad.

The world is forgetting about us, and that’s doubly true of the Arab world,” the 35-year-old father of three said with a frown. “So much for the Arab Spring.”
If there is one thing Palestinians agree on, it’s that the turmoil sweeping the Middle East for the past 15 months has largely replaced the “Palestinian issue” in the hearts and minds of their fellow Arabs. While many Arabs, especially Islamists, are still calling for Palestinian “liberation,” the welfare of Palestinians isn’t the rallying cry it used to be, analysts say.

As if the Land Day turnout weren’t enough to demoralize Palestinians, months after the Palestinian Authority demanded statehood in the United Nations, virtually no one in the Arab world is publicly demanding Palestinian sovereignty. The flotillas-to-Gaza movement has apparently petered out, and everyone from Madonna to Jethro Tull will be performing in Israel this year, in defiance of the pro-Palestinian boycott movement.

By its own admission, the Palestinian Authority is bankrupt. With donor nations withholding funds, the mere $340 million Arab nations contributed to PA coffers ($200 million less than anticipated) in 2011 has rendered the PA unable to pay its employees several months of back salaries.
And West Bank unemployment, though much lower than it is in Gaza, is officially 17 percent. Many Palestinians think the actual figure is much higher.

“There is the feeling that the Palestinian public is not really present in the minds or on the agendas of the current rulers in the Arab world,” says Basim Abu Zbidi, a Palestinian political scientist from Bir Zeit University. “There is an almost endless mess going on in the Arab world, particularly in Egypt and Syria, so [non-Palestinians] are paying more attention to internal matters.”

The irony, says Palestinian pollster Khalil Shakaki, is that many Palestinians initially had high hopes for the Arab Spring.

"It is perceived as a strategic shift in the region; a deep transformation,” says Shakaki, who found that 64 percent of the Palestinians polled in March 2011 believed that the Arab revolts would have “a positive impact on the Palestinian cause.” A year later, only 51 percent expressed such optimism.

While Shakaki believes the Palestinian public as a whole think “the Arab Spring is good,” and that they largely support the demonstrators trying to bring down the regimes, “a lot” are nonetheless “disappointed,” he says.

“A year later, there is the feeling that the [revolutionaries] have not done enough to demonstrate they care more about the Palestinians than the regimes did.” They are also deeply disappointed that the democratic ideals the revolutionaries fought for in Tunisian and Egypt have yet to be implemented.
Finally, the pollster said, some Palestinians are disillusioned by their own failure to adopt the largely non-violent activism that toppled the regime of Egypt’s Hosni Mubarak.

Analysts have been trying to determine why today’s young Palestinians — the children or younger siblings of those who launched the first and second Palestinian intifadas — aren’t rising up against either the Hamas leadership in Gaza or the Fatah/PLO leadership in the West Bank.

Like many other Palestinians, Zbidi maintains that Palestinians do not feel capable of toppling their own governments while Israel calls the shots on everything from security to water resources.

“As long as Israel maintains control of Palestinian territory, they think it would be a waste of time to have their own Arab Spring.”

But if and when the Palestinians do take up the gauntlet, Zbidi says, the internal reform process might start with a reconciliation between Hamas and Fatah.
“After the Palestinians get their internal house in order, I think they will exert further efforts toward independence.”

Mona Christophersen, a Middle East researcher, believes there is more to the story.

In the March 2012 study “Palestinian Youth and the Arab Spring,” Christophersen, a researcher at the Fafo Institute for Applied International Studies in Oslo, found that Palestinian youth “have largely exited from politics, prioritizing personal affairs (family and job) when considering the current situation and their future.”

They are disgruntled about their job prospects, Christophersen wrote, “and corruption and political favouritism are experienced as a major problem on the personal level in both areas.” And although the youths criticize the state of democracy, freedom of expression and human rights both in the West Bank and Gaza, “neither government is completely condemned, on account of their success in raising the level of security (the Gaza Strip) and economic prosperity (the West Bank).”

And yet this discontent “does not translate into increased political interest or engagement,” she noted. Instead, most young Palestinians “have abandoned” organized politics, first, because the political elite “that aspires to represent the resistance” has systematically discouraged grass-roots activism; second, because of the “widespread culture of fear” surrounding political activity — a fear she did not specify.

Most strikingly, “Palestinian youth do not seem to think that their situation is desperate enough to warrant any large-scale departure from the political routine,” Christophersen wrote. Instead, “they try to realize their full human potential as silent form of resistance,” leaving the political scene to their leaders.
Khalil, a 20-year-old university student from Bethlehem who declined to give his last name, insisted that things are indeed tough, but said people his age don't have the stomach for another violent uprising.

“We, the younger people, spent the first decade of our lives living through the violence and fear of the [second] intifada,” he said. “Now it’s our turn to live life as normally as we can, getting an education and starting a family, given the Israeli occupation.

”Though Khalil would not rule out a Palestinian Arab Spring directed either inward or outward, he predicted that, “for the time being at least, things will remain quiet.”