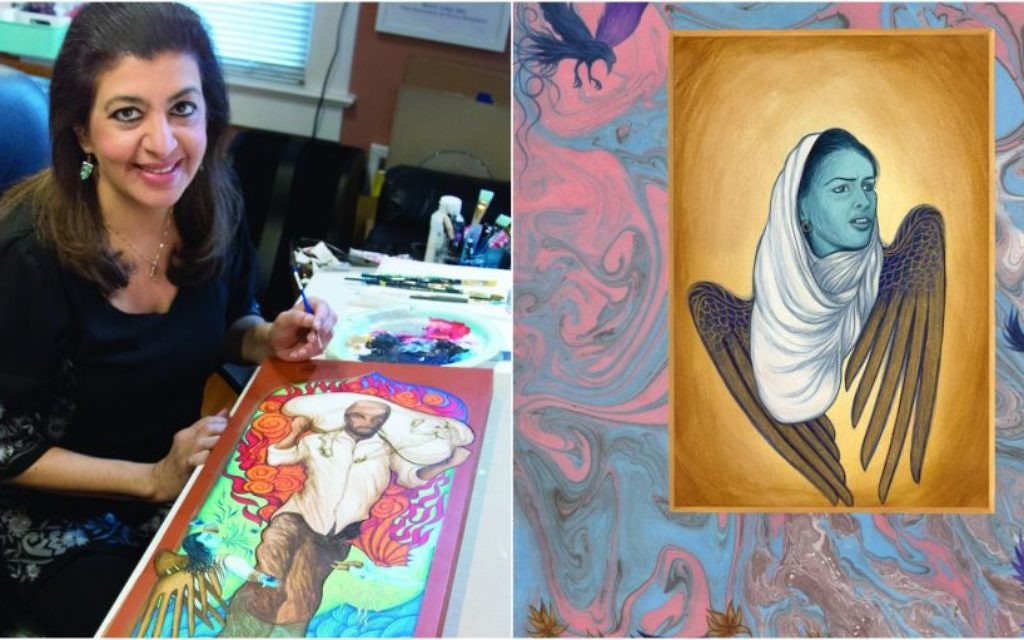 Turn right and right when you enter Siona Benjamin’s new show at the ACA Gallery in Chelsea, and you’ll find yourself inside the artist’s installation, “My Magic Carpet.” It’s a round tent-like enclosure, with sides made of shimmering copper-colored fabric. On the floor, the round patterned carpet, produced in India based on a design in one of her paintings, has the word, Shema, or Hear, in Hebrew in its center. Plush, decorated pillows are scattered at the edges, and the ceiling is a painting of two camels fighting, a jolt to the peace of this space.

Visitors remove their shoes to enter and rest. Like the biblical Abraham’s tent, one side is open, as if welcoming guests, and there’s blue-wrapped chocolate to taste. “My Magic Carpet” is inspired by “The Arab and his Camel,” one of the “Arabian Night” tales Benjamin heard as a child growing up in Mumbai, India. In the story, an Arab man lets his camel have an inch of his tent, and he is eventually pushed out, so that the camel can fit in. 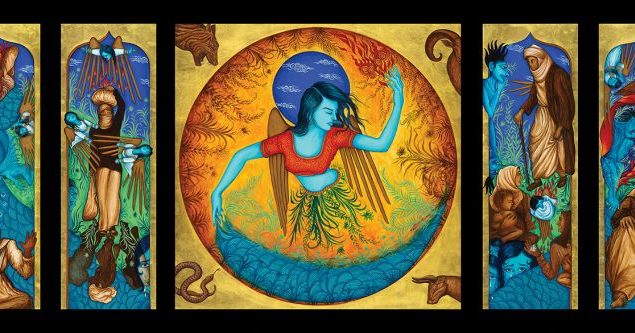 Benjamin’s “Exodus: I See Myself in You,”

Inside the tent and seated on the carpet, Benjamin, who grew up as part of the Bene Yisrael (the oldest Jewish community in India), explains that she wants visitors to experience the exotic nature of the space, and wants them to notice how they feel when others enter it.

As a Zionist and feminist, [she] wants to raise questions about what it means to claim space.

For her, the story of the camel is about “occupation” and understanding boundaries “and the battles we concoct about our homelands.” She doesn’t refer directly to the India-Pakistan battle over Kashmir or the Israel-Palestine conflict, but as a Zionist and feminist, wants to raise questions about what it means to claim space.

“What I like to do in my art is to see all sides,” she says.

“This is also a little home — it’s about thinking about home, building a home, sustaining a home, going home,” she says. While her latest paintings, works on paper and installations in “Siona Benjamin: Beyond Borders” are on the theme of “Exodus,” much of her work circles back to the theme of finding home.

“I don’t think I will ever have a home. Most of the time I feel it’s OK. Home is where you pitch your tent.”

Growing up, Benjamin attended Catholic and Zoroastrian schools, and at home they observed Jewish rituals like Shabbat. Her two best friends were a Muslim and Portuguese Christian, and their families felt at ease and natural together. She was trained in fine arts in Mumbai, and then left at age 23 to further her studies in Illinois, later settling in New Jersey, where she now lives. She also spends time in Israel, where she has a lot of family, and returns to India on occasion, although since her mother died there in 2012, she has less of a connection.

“I don’t think I will ever have a home. Most of the time I feel it’s OK. Home is where you pitch your tent.”

Her “Exodus” series focuses on refugees displaced by war and other strife, particularly on people fleeing Syria. One wall features a grid of 24 black-and-white portraits; all are the faces of refugees — inspired by news photographs — drawn simply and starkly, capturing fear and distress in an economy of lines. Some of these faces also appear elsewhere in the show. 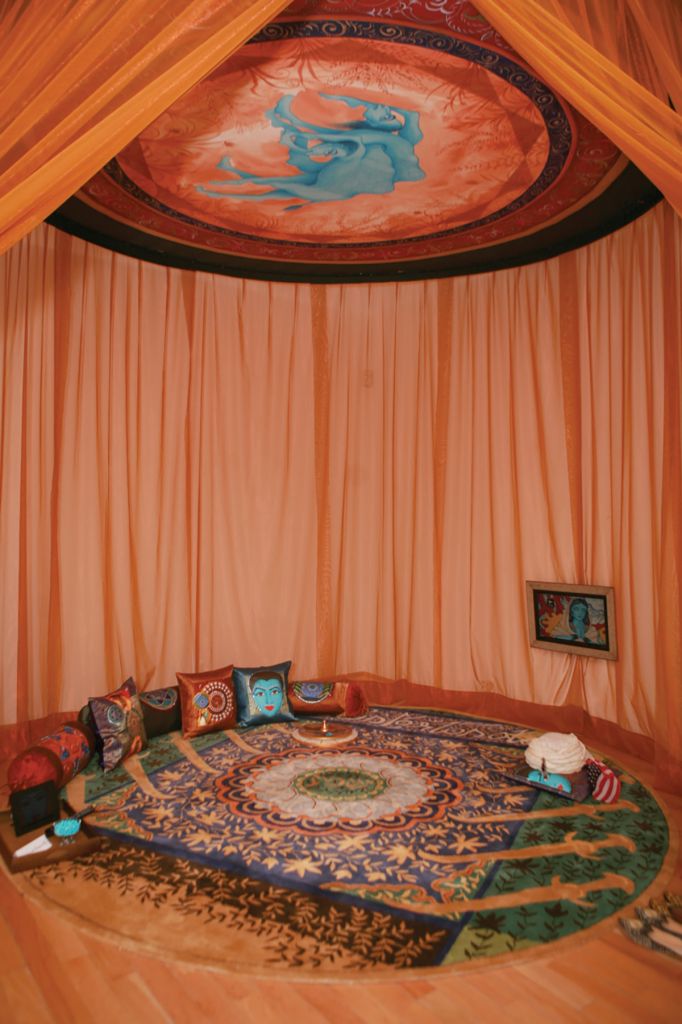 A meditation on displaced people. Above, the tent-like enclosure that greets the visitor.

More typically, Benjamin’s works are brightly colored, full of images, echoes and associations. Many are her own strikingly beautiful variations on traditional Indian-Persian miniatures, with a central scene and much attention given to the ornamental decoration in the ordered geometric borders, panels and frames. She studied both classical art and the techniques of miniature painting and, later, theater set design. While she now asserts her lyrical, feminine lines, she was not always encouraged to do so by teachers.

“I like to learn the rules and break them”

With her experience in theater, her paintings are like set designs, her figures the actors, she explains. At times, she is playful. Her delicate imagery is presented boldly, and at the same time, much is hidden, so that each viewing reveals more.

“I like to learn the rules and break them,” Benjamin says. She draws outside the lines, and her images — like her ideas — might cross over the boundaries she sets up on the page. In “Exodus #5,” for example, a Russian firebird is aloft in the central panel, its tail floating in the marbled border. Below, a blue-faced woman walks huddled over, a veil that looks like a tallit over her head as rain is coming through.

She thinks of herself as a visual storyteller, and has enjoyed studying midrash over the last several years with Professor Burt Visotzky of the Jewish Theological Seminary, adding her own interpretations to those of the rabbis’. 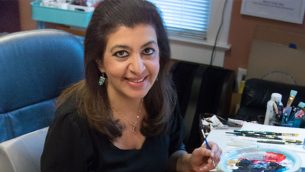 The centerpiece of the exhibition, “Exodus: I See Myself in You” — a painting on seven wood panels with 22K gold leaf set against brilliant colors — presents a central blue-faced figure, the upper body of a dancer with angelic wings, and scenes on either side of refugees. One man carries a ram on his shoulders, a woman cries out in anguish, another walks aided by a stick and several carry suitcases and children. Each panel has the four elements of earth, air, water and fire; the water is a repeating pattern of blue, like that seen in Indian and Japanese art. Mixing in biblical images, Benjamin places a woman soothing a child inside the mouth of a whale, a hint of another refugee story. A stand in front of the painting turns the overall work into what the artist describes as a menorah.

“Blue for me is a symbol of being a Jewish woman of color.”

In this and other pieces of her “Exodus” series, where the faces of refugees are framed in marbling, Benjamin expresses compassion for those who are seen as the other, as she is. She clarifies that she is not a refugee, that she came to America by choice, but she can understand the complex feelings of having left home. 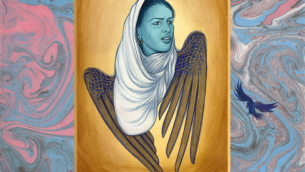 Some of her refugees have blue faces, as does her own face in other paintings. “Blue for me,” she says, “is a symbol of being a Jewish woman of color.” She uses a warm shade between turquoise and sky blue, a color she mixes herself. Her choice of blue is inspired by the color of the sky and the ocean — “When you look at the sky here and in India, it is the same. It’s a feeling of belonging everywhere and nowhere, a feeling I have all of the time.” She admits that there’s a little bit of herself in all of her blue women.

“I want to blur the boundaries between cultures, to be able to take from the specifics of my Indianness, my Jewishness, my Americanness, and make something universal.”

“I want to blur the boundaries between cultures, to be able to take from the specifics of my Indianness, my Jewishness, my Americanness, and make something universal,” she says. “I want my art to be about humanity.” She takes much pleasure when someone from another culture says they see themselves in the work. n

“Siona Benjamin: Beyond Borders” is on view through April 22 at ACA Galleries, 529 W. 20th St., Manhattan. On Saturday, April 1, from 2-4 p.m., the gallery will host a conversation with Benjamin and Professor Ori Z. Soltes, and on Wednesday, April 19 at 6 p.m. there will be a screening of the documentary, “Blue Like Me.”