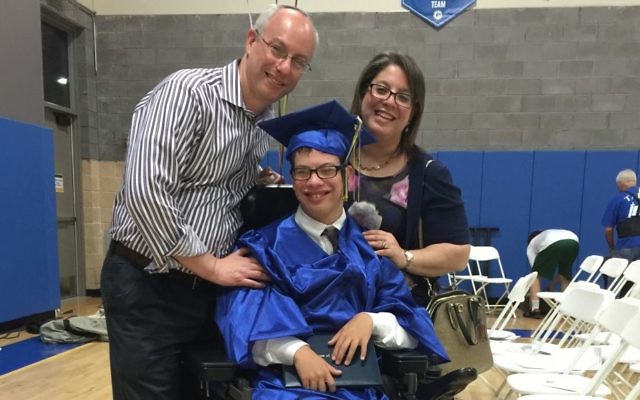 SINAI Schools has won multiple prestigious Awards of Excellence and an Award of Merit from The Accolade Global Film Competition for their short documentary, Jacob’s Footprints.

Jacob’s Footprints premiered at SINAI’s annual benefit dinner in February, 2017. It tells the uplifting story of SINAI student Jacob Adler and his parents, Hillel and Debby. Jacob, who has cerebral palsy, has inspired countless individuals with his courage, optimism, and refusal to give up in the face of challenges. He has helped to change the way people view individuals with disabilities, and his journey through SINAI Schools illustrates the power of inclusion and the lengths to which SINAI will go in order to meet the needs of their students.

Jacob’s Footprints (with intro) from SINAI Schools on Vimeo.

Sam Fishman, Managing Director, and Abigail Hepner Gross, Director of Communications, received the awards as co-producers/directors on behalf of SINAI Schools, and Len Khodorkovsky received them on behalf of the production company Jamestown Associates.

“Sam and I pour our hearts and souls into our films, because we know they can impact the way people think about individuals with disabilities and their inclusion in society,” said Ms. Hepner Gross. “It is tremendously gratifying for our work to be recognized with these awards.”

“Over the past decade, SINAI has built up a library of films touching on difficult topics such as stigma, family dynamics, and inclusion,” Mr. Fishman said. “This is exactly why we invest our energies in films like Jacob’s Footprints: to trigger a change in people’s hearts and minds. We believe Jacob’s Footprints, along with the other short documentaries we have produced in the past several years, carry really important messages, and can be a tremendous source of reassurance and strength for parents of children with special needs.”

Jacob’s Footprints received Awards of Excellence in the categories of Disability Issues, Jewish, and Commercial/Informercial. In the category of Documentary Short, the film won an Award of Merit Special Mention.

“The craft and skill exhibited by your entry is outstanding and stands above other productions,” said Rick Prickett, The Accolade Competition Director, in his congratulatory letter to SINAI. “We look forward to seeing more work from you in the future!”

The Accolade recognizes film, television, videography and new media professionals who demonstrate exceptional achievement in craft and creativity, and those who produce standout entertainment or contribute to profound social change. Entries are judged by highly qualified professionals in the film and television industry. Information about the Accolade and a list of recent winners can be found at www.accoladecompetition.org.

In winning an Accolade, SINAI Schools joins the ranks of other high-profile winners of this internationally respected award including the Oscar winning production of The Lady in Number Six by Malcolm Clarke; Dave Bossert of Disney for his short documentary, The Tunes Behind The Toons; Hollywood industry veteran Ron Howard for When You Find Me; and Highwire Films Australia for their popular ABC TV series Twentysomething.

“The Accolade is not an easy award to win,” said Mr. Prickett. “Entries are received from around the world from powerhouse companies to remarkable new talent. The Accolade helps set the standard for craft and creativity. The judges were pleased with the exceptional high quality of Jacob’s Footprints.”

In addition, Jacob’s Footprints has also won an Awards of Excellence in the categories of Disability Issues, Documentary Short, and Jewish in another film competition, the Best Shorts Competition.