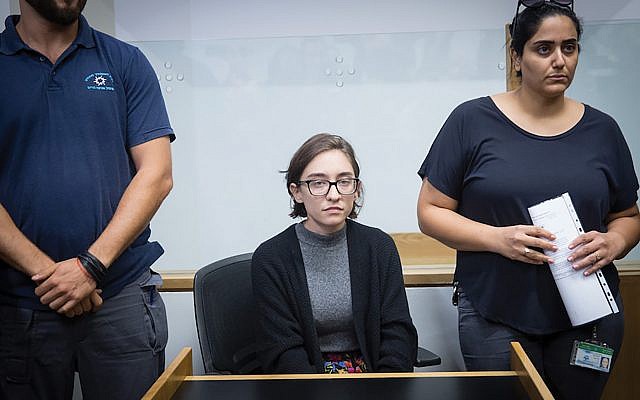 University of Florida student Lara Alqasem. any in Israel are questioning the wisdom of holding the 22-year-old in a detention center near Ben Gurion Airport. JTA

Tel Aviv — She’s 22 years old. She’s been a student at the University of Florida where she led a small Palestinian rights club, and she wants to pursue graduate studies at Hebrew University. But she’s been held up in a detention center near Ben Gurion Airport.

Now, Israel’s government has turned Lara Alqasem into the latest flashpoint in the debate over the government’s effort to crack down on the movement to boycott Israel — and whether the decision to detain her is strengthening Israel’s hand against activists or backfiring.

The Israeli Supreme Court is hearing an appeal Wednesday of a decision — backed up by a Tel Aviv District Court judge — to bar entry to Alqasem because she served as the president of a Students for Justice in Palestine chapter at the University of Florida.

But many in Israel are questioning the wisdom of a move that has stirred up opposition from major Israeli universities and liberal American Jews.

Jonathan Rynhold, a political science professor at Bar Ilan University who has focused on how to grapple with boycotts of the Israeli academy, said that the decision to bar free entry to Alqasem will help convince critics of Israel to join the BDS (boycott, divestment and sanctions) movement. It will also disillusion liberal American Jews, who, despite the military occupation of the Palestinian territories, continue to support Israel.

“Everybody understands that Israel needs to protect itself from threats, but nobody understands why Israel needs to protect itself from a young girl who wants to study at one of its universities,” Rynhold said. “American Jews sympathize with Israel as long as it’s a democracy. If you act to undermine democratic values, and freedom of speech, you’re encouraging people to be anti-Israel and you’re becoming a recruiting agent for BDS.”

Alqasem arrived in Israel on Oct. 2 after having received a visa from the Israeli Consulate in Miami to pursue studies at Hebrew University. Government officials claim that she didn’t disclose information about her activities supporting the boycott movement, while Alqasem said she wouldn’t have chosen to study at Hebrew University if she still believed in the movement.

Israeli courts found that the decision by border authorities was reasonable based on Israel’s year-and-a-half-old law barring boycott supporters from entering Israel, saying there is a real risk that she’ll join protest activities that will weaken Israel.

Alqasem’s case is the latest in a series of Israeli border detentions of critics of its policies toward Palestinians or people they fear might be critics. Liberal critics decry the policy as another sign of the erosion of democracy by Israel’s right-wing government. Defenders like Prime Minister Benjamin Netanyahu and Public Security Minister Gilad Erdan say Israel is behaving like any other sovereign democracy — and that it has the right to bar entry to those on record as opposed to its existence.

“Israel has good reasons why to not allow people involved with BDS to get into Israel. People trying to damage Israel by using boycotts and sanctions should understand that they are not welcome in Israel,” said Yoaz Hendel, a columnist for Yediot Achronot and a former adviser to Prime Minister Netanyahu.

“I understand the challenges and the weak points of the policy, but I don’t see any other way.”

Hendel added that if Israel had been able to prevent entry to Rachel Corrie, the U.S. anti-occupation activist killed in the Gaza Strip by an Israeli tank, it would have avoided “strategic” damage. He argued that the Israeli debate over the detention policy is a sign that free speech remains robust.

In the U.S., liberal American Jewish groups like J Street and the Reform movement criticized the move.

The discussion about Alqasem comes as Hagai Elad, the director of B’Tselem, an Israeli human rights watchdog monitoring the occupied territories, comes under withering criticism for a planned address to the United Nations Security Council.

But critics of the objections made by B’Tselem and Elad say they are strengthening the hand of Israel’s enemies.

Two years ago, Elad gave a withering indictment of Israeli policies in the West Bank at the international body. Netanyahu this week called B’Tselem a “disgrace,” and Israeli U.N. Ambassador Danny Danon said Elad has “crossed a red line” and is “collaborating with the enemy.”

Israeli analysts said that the attacks on Elad and the detention of Alqasem serve to give right-wing politicians street credibility and talking points to fire up their voter base. Israelis will go to the polls sometime in 2019 to elect a new parliament.

But some analysts said there’s something deeper at play: The detention of Alqasem plays to an existential Israeli insecurity.

“It may be showing some kind of insecurity of Israeli society and the government. When you feel strong, you are not afraid of a few voices who criticize you. We lead the world in high tech, our leaders are received in Russia, the U.S., India, and China. But on the other hand, when it comes to identity issues, we are fragile,” said Yedidia Stern, a law professor at Bar llan University and vice president of the Israel Democracy Institute.

“The Jewish DNA has left the diaspora. But the diaspora is not out of us,” Stern continued. “We still have an insecurity as Jews in the world. BDS has anti-Semitic tendencies, so we react in an aggressive way. And this 22-year-old woman is suffering the fallout. But it’s not logical. It’s not in our interest.”

Writing a co-authored article in the liberal daily Haaretz newspaper, former Shin Bet director and Labor Party Knesset member Ami Ayalon and Idit Shafran Gittleman called the policy another milestone in the breakdown of Israeli democracy: “Every Israeli should ask themselves: Is this the limit of the country’s strength, which the country’s leaders love to brag about at every opportunity. Exploiting entry to call for a boycott?” they asked. “Have we reached the edge of madness? Have our existential fears cost us too high a price?”

Hebrew University argued in a statement that the detention policy contradicts the government’s policy of trying to attract foreign students to study at Israeli universities and participate in research.

Bar Ilan’s Stern argued, “My liberal and Jewish instincts lead me to think that I would like her to be here and have a discussion with her. Let’s let her see Israeli life. Let’s let her taste Israeli democracy.”