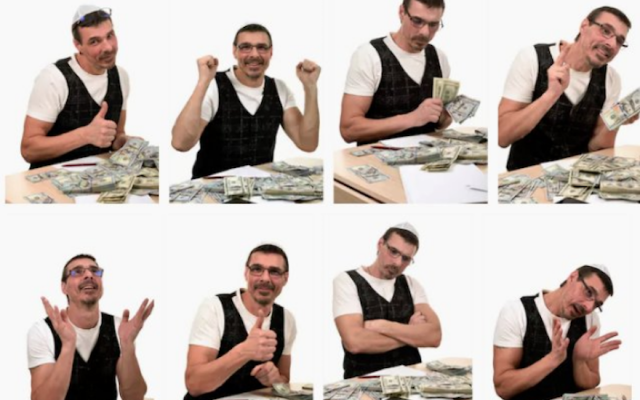 WASHINGTON (JTA) — Shutterstock, the stock photo supplier, removed staged photos of a man wearing a yarmulke and reveling in piles of cash after online complaints that it was anti-Semitic.

“We can confirm that all images of concern have now been removed,” the agency told Amy Spiro, a Jerusalem Post reporter, on Twitter on Wednesday. “Thanks again for bringing this to our attention.”

Twitter user Dennis Wilen brought the photos, by Viacheslav Krylov, to the company’s attention on Nov. 9.

The photo was accompanied by captions reading “portrait of a happy man in a Jewish cap and waistcoat sits at a table with lots of money and shows thumb” and “a man accountant of Jewish nationalism sitting in the office attentively considers monetary hundred-dollar bills,” according to Spiro.

The image remains available at the stock photo site Depositphotos.

Shutterstock features portfolios by hundreds of photographers who are paid if their work is chosen by subscribers, including newspapers, websites and advertising firms.

Krylov’s portfolio page identifies him as hailing from Russia. On the site are photos of a similarly joyful woman in a black jacket over a white frilly shirt handling wads of cash. The caption reads, “Very happy, middle-aged woman lifting your thumb and smiles to luck, holding a lot of money.” She appears white, although her ethnicity is otherwise indeterminate.