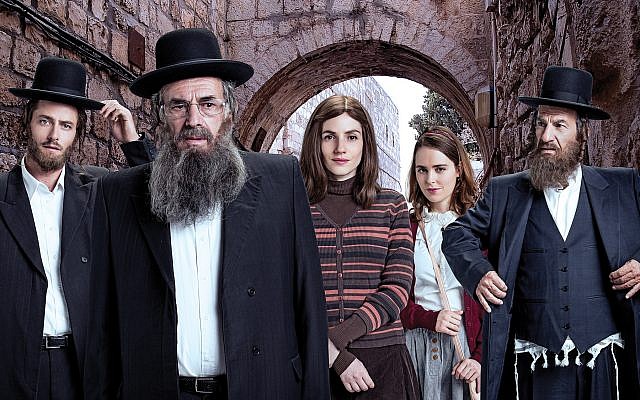 The cast of ‘Shtisel. Courtesy of Ohad Romano

The international success of the Israeli television series “Shtisel,” a drama focusing on the lives of a charedi widower and his family in the Geulah section of Jerusalem, is a cultural phenomenon. It reminds us that the human condition has universal appeal, and that 21st century technology can connect civilizations like never before imagined.

The Jewish Week Media Group is proud to have played a major role in presenting three special evenings this week with leading cast members of the show and its producer. In New York, we partnered with UJA-Federation of New York and the host Temple Emanu-El’s Streicker Center for two programs in conversation with the actors and producer. In New Jersey, the discussion was co-sponsored by our sister publication, New Jersey Jewish News, and the host Congregation Agudath Israel of Caldwell, in partnership with The Honey Foundation for Israel and Karen and Jeremy Glaser (in memory of Roslyn Hoffer). In all, more than 5,700 people were scheduled to attend the three sold-out events; many more were on the waiting list.

The series was a surprise hit in Israel when it aired over two seasons, beginning in 2013. After all, charedim don’t have TVs and most Israelis are less than sympathetic to the community. But when the show was released by Netflix early this year, widening its potential audience to 130 million, the response was overwhelming. In addition to commercial success, “Shtisel” provides an opportunity for viewers to see beyond the black and white appearance of charedi Jews and appreciate their hopes, dreams and struggles in an Israeli society that often divides over secular and religious issues.

The charedi population is about 10 percent of Israeli society and continues to grow, with many living below the poverty line. The fact that much of that community has chosen to separate itself, valuing lifelong Torah study over employment, has led to a major societal problem exacerbated by the yeshiva world’s widespread resistance to army service.

UJA-Federation of New York has played a leading role in supporting and offering programs in Israel where charedi men and women can learn and use skills, particularly in the tech sector, that allow them to be wage-earners. And UJA-Federation is investing in secular education programs for charedi youth to prepare them for the wider world.

Similarly, Gesher, an Israeli nonprofit that seeks to bridge the gaps in society, works with charedim in areas where they interface with general Israeli society, according to JJ Sussman, the group’s international director. Those areas include academia, employment opportunities, mixed neighborhoods and the IDF. Sussman notes there are now more than 10,000 charedim in programs of higher learning in Israel. More specifically, Gesher’s film fund helped make “Shtisel” a reality.

But the issue of army service for charedim continues to fester; it has long been a divisive identity/social issue and was a major reason why Prime Minister Netanyahu was unable to form a government despite his victory in the Israeli elections in April. Avigdor Lieberman’s secular hawkish party refused to join the coalition unless there was backing for legislation that would draft more charedi youth. The charedi parties resisted as part of their effort to segregate themselves and maintain their religious ideals.

Some charedi leaders are calling for more compromise within their camp, seeking ways to engage in the general society without losing their distinctiveness. Clearly, the more understanding there is between Israeli sectors, the more stereotypes can be set aside and progress can be made. Fortunately, the fictional Shtisel family is playing a role toward a more tolerant society.