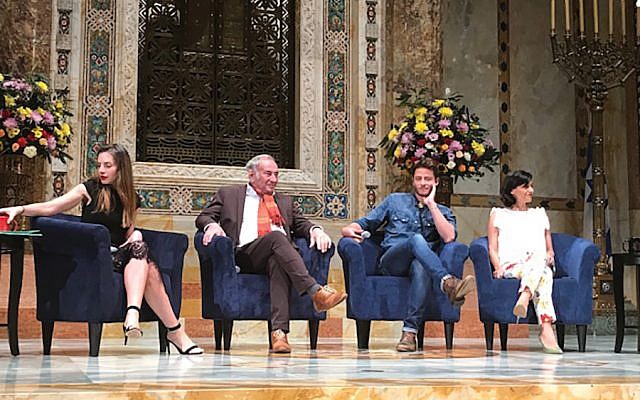 The stars of “Shtisel,” three secular Israeli actors playing charedi Jews in a cloistered Jerusalem neighborhood, thought no one outside of Israel would ever see their show. But since it began streaming on Netflix in December 2018, the series about four generations of an ultra-Orthodox family has gained a large and loyal following in the U.S. Last Tuesday night, Linda Cantor was one of hundreds of people lined up outside Temple Emanu-El’s Streicker Center on East 65th Street who looked as if Chanukah had come early.

The synagogue, which partnered with The Jewish Week Media Group and UJA-Federation New York, offered a chance to see three members of the cast — Michael Aloni, who plays Akiva; Doval’e Glickman, who plays his family patriarch, Shulem Shtisel; Neta Riskin, who plays Akiva’s sister Giti — along with producer Dikla Barkai as part of a three-night event, “Shtisel: Behind the Scenes of the Unorthodox Orthodox Drama.” (The Tuesday and Wednesday night events in the soaring sanctuary of Temple Emanu-El drew some 4,500 people; a Thursday night event at a Caldwell, N.J., synagogue drew 1,800 people.)

Bloomberg News senior editor Ethan Bronner, who moderated Tuesday night’s event, asked the cast a range of questions, including some about the show’s focus on dreams (there are a number of poignant scenes of magical realism in which Shulem’s dead wife reappears) and food. Aloni said Akiva is a dreamer who is in love with being in love. Riskin noted that the crew managed to “make brown food look good” and the three actors praised the work of writers Ori Elon and Yehonatan Indursky for creating flawed and complex characters.

Aloni, who plays a young man trying to find a wife and a career as an artist, said he literally kissed the pages of the script when he saw it but figured the show wouldn’t be a commercial success since there was no sex, violence or a car chase. He joked that the only thing heating up was the heater his character gives away for free.

“I’ve never dreamt that I would come to this point, sitting here in New York City with this wonderful audience in a synagogue that makes me want to be married here,” Aloni declared. Aloni was not asked if he is dating anyone, but on Wednesday night he hinted at it by saying that he’s not on the dating app Tinder because he can’t be.

Glickman admitted that in his first audition, he didn’t memorize his lines well enough and had to study hard to do well when he got another chance. He marveled at the size of the Temple Emanu-El sanctuary, saying: “If God is not here, there is no God.”

Riskin was full of insightful commentary. She said she was happy the writers did the unexpected when it came to playing a woman dealing with her husband’s departure and infidelity.

“Instead of going with the man to Argentina, [following] his adventures and his lovers and his affairs, we stay with the one who is left behind, with the one who is sitting at home; the notion that this story is not less interesting was the thing that just blew my mind,” Riskin said.

She said she was stunned to learn in the script that upon her husband’s return, her character doesn’t ask him where he was. The actress said she realized that by not caring to hear his story, he becomes the weak person in this relationship.

About her preparation for playing a charedi woman, a far cry from her life as a secular actress in Tel Aviv, Riskin said that rather than studying Torah, her charedi acting coach had her practice certain behaviors, ones that speak volumes in the ultra-Orthodox world — how a woman should cross her legs when seated and how she should walk. She was told not to walk confidently with her shoulders thrown back and looking straight ahead, but with her eyes cast down, as if she didn’t exist.

Glickman showed off his comedic chops with a bombastic bit recounting how he experienced technical difficulties with enter-and-exit shots at a bookstore in the ultra-Orthodox Jerusalem neighborhood Mea Shearim. Wearing an earpiece and being directed by the crew in a nearby van (the scene was being shot undercover), he shouted, “I can’t hear you!” and other odd things, and yet the bookseller acted as if this were all normal. When Glickman asked the patient bookseller why he registered no reaction to what was surely a strange occurrence, his response was priceless.

“He said, ‘Come next week, I’m getting new books.’” This would never happen in Tel Aviv, said Glickman.

Zahava Ritter, 36, of Manhattan was one of many who said she was happy she came.

“I could have stayed and listened to the conversation for another two hours,” she said, adding that she believed Glickman’s interruptions of the other actors were part of him being in character.

Michael Oren, former Israeli ambassador to the U.S. and current Knesset member, said he watched the series twice, enjoyed the insights from the actors and said the show is “one of the most profoundly moving love stories in which not only does nobody kiss, nobody touches and artistically, that’s an immense challenge.”

Ashley Behm, 12, of the Upper East Side, said she was happy to see the actor who played Giti.

“I think she’s a really good role model,” she said. “She’s strong and does so much for her kids.”

At Wednesday night’s event, moderated by author Abigail Pogrebin, “Shtisel” fans learned that “kosher supervisors” had to stop scenes when actors walked by mezuzahs without kissing them, and instructed Riskin that her character couldn’t sit on the bed so close to her husband right after giving birth.

Those in attendance got to see an unseen Season 2 clip of Shulem talking to his mother Malka about the sudden marriage of his young granddaughter Ruchami, and trying to make it look like the suddenness of it was not so bad.

Former Connecticut Sen. Joe Lieberman was all smiles at Wednesday night’s event, and said Shulem is his favorite character. He noted that Riskin showed her cerebral nature.

“I was very touched by the actors,” Lieberman said. “I thought they were brilliant in their analysis of [the show], and you could feel the interaction between them and us. [Riskin] is brilliantly analytical. It was thrilling to hear.”

Jonathan Grossman, 55, who flew in from Florida for the event, said he hoped the cast would come to his home state, adding that the long trip was worth it and that he was waiting for Season 3.

Asked about the current labor negotiations that are threatening Season 3, Barkai told The Jewish Week she had no new information about whether or not the new season would happen, but guessed it would.

“We cannot confirm Season 3 yet,” she said. “There are many reasons. Let’s hope. We are thinking positively. I would say it will.”