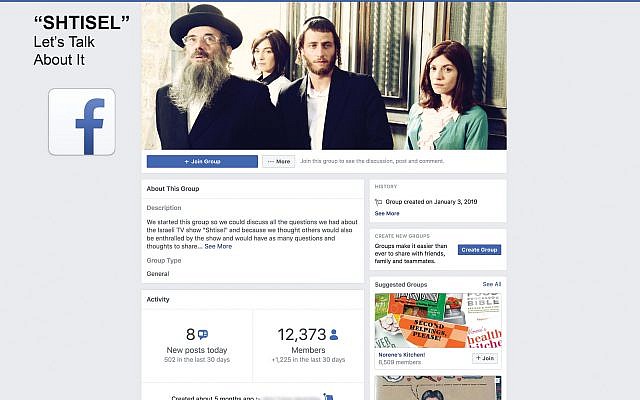 The show’s Facebook page has led to a cottage industry of speculation about its characters.

HOW CAN SHULEM SHTISEL HAVE ENOUGH money to help buy each of his children an apartment?

Why do the married women on “Shtisel” cover their hair even when they’re at home, alone with their husbands?

These are just some of the questions fans of the popular TV show have been asking on social media. The show, which debuted in Israel in 2013 to local acclaim, has attracted a legion of non-Israeli fans since premiering on Netflix (with English subtitles) in December 2018.

Thousands of followers, both Jewish and non-Jewish, discuss the show on English-language Facebook groups dedicated to “Shtisel”; their Hebrew counterpart boasts 46,000 followers.

“I am so impressed with @Shitsel @netflix… It will gut you with its writing, acting and directing. @michaelaloni is a star on the rise,” she tweeted.

To which Aloni tweeted: “I am so deeply moved by your words.”

Many have tried to analyze why “Shtisel,” a relatively small-budget Israeli TV show about a charedi family in Jerusalem, has won over the hearts of viewers all over the world.

“What is certainly true about the show is that its storylines and the actors’ performances are so engrossing, it’s almost easy to forget about the characters’ peyot and sheitals,” Selah Maya Zighelboim wrote in a piece about “Shtisel-mania” for the Washington Jewish Times.

“This is probably because the stories aren’t about how the characters struggle with their religion, unlike other portrayals of the Orthodox in mainstream media, such as ‘One of Us,’ ‘Disobedience’ and ‘The Chosen.’ Instead, they are about love or loss or other universal stories.”

Shayna Weiss, associate director of the Schusterman Center for Israel Studies at Brandeis University, believes viewers are also attracted to the show’s wholesomeness.

“There’s no sex and violence, so it appeals to people looking for the anti-‘Game of Thrones.’ There’s something very wholesome about it. Thanks to the likes of HBO, TV has gotten a lot more graphic. ‘Shtisel’ represents a different, earlier era of television,” Weiss told The Jewish Week.

Viewers who have joined the show’s Facebook fan groups (Shtisel – Let’s Talk About It, Shtisel Addicts) dissect the characters’ actions the way yeshiva students pore over the Talmud. In one thread, members discussed the halachic and genetic implications of a potential marriage between first cousins Akiva and Libby.

In another, members asked why Shulem’s yeshiva — like the vast majority of charedi Jews in Israel — doesn’t celebrate Israel’s independence day.

“Shtisel” fans cite a wide range of reasons for their devotion to the show.

“For Jews like me (I am 100 percent of the Jewish population in my town), the show is a connection to my soul-roots and a reminder of my childhood, even though I am and always have been secular,” said Randy Barbara Kaplan, who lives in a small rural village in upstate New York.

Mary Lou Bethune, a non-Jewish viewer who lives in Hillsborough, N.C., said she watches the show for its “depth, its humanity, its humor, the wonderful acting.”

“I don’t pretend to understand the Orthodox world, but I truly loved being reminded that we are all the same,” Bethune said.

Rachel Selby, who lives in Jerusalem, said she was drawn to “Shtisel” because she wanted to learn more about her city’s charedi community.

She noted that charedi Jews in Geula, the Shtisel family’s neighborhood, “live in such modest conditions and are driven by community life rather than material gains.”

Although Selby personally knows many charedi Jews, she said, “I have never seen inside their houses and how they live, eat, sleep, day-to-day stuff. I am both in awe of the contentment with less, and at the same time, amazed at the lack of control over their own lives and the narrow ambition of only being a great Torah scholar.”

Bonnie Boyens Craft, who lives in Stone Mountain, Ga., said she joined a “Shtisel” Facebook group because it has the feel of a book club.

“When I finished watching I just sat quietly for a while thinking that it was one of the best pieces of television I have seen and wishing I had someone to talk about it with. This [Facebook] group has given me insight into the culture and religion of the characters (I am not Jewish) and made my re-watching of the show even more enjoyable.”

Mickey Mayer, another “Shtisel” devotee, called the show “a window onto a very different world, which fascinates me. … The acting is superb: it’s hard to believe the actors are just that: actors. And I love the Hebrew! What’s not to love?”

Nechama King, a Modern Orthodox Jew in Jerusalem, loves the give-and-take she sees in the online groups.

“It’s nice that other people are thinking about the show as much as I do,” King said. “We’re a community.”