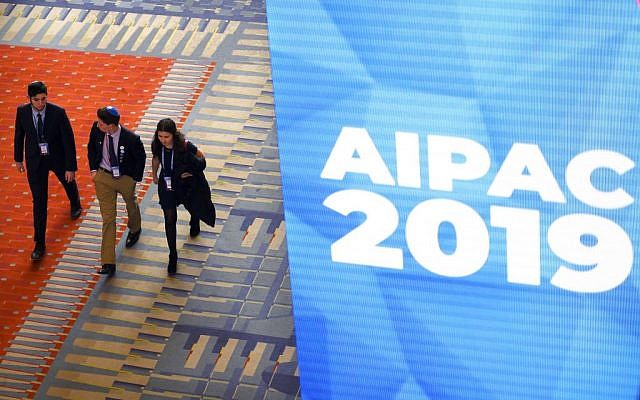 Washington, D.C. — After weeks of sustained criticism of AIPAC coming from the political left, the pro-Israel lobby’s annual policy conference kicked off Sunday by projecting a broad base of bipartisan support for Israel.

“I am a progressive Democrat,” said Anton Gunn, a former South Carolina state representative who served in the Health and Human Services Department in the Obama administration, from the main convention stage. “I am an American, and I stand with AIPAC.”

Similar pronouncements followed from other conference attendees across the stage, several of whom introduced themselves as progressives.

“I believe that AIPAC is the one place in Washington where bipartisanship is alive and well,” said former Rep. Ileana Ros-Lehtinen, a Republican from Florida and staunch pro-Israel advocate.

When AIPAC CEO Howard Kohr took the stage, his tone wavered between reiterating broad bipartisan support for the Jewish state, calling out criticism and encouraging Israel’s supporters to act to counter critics.

“The scurrilous charge of dual loyalty is a signal,” said Kohr in a reference to Rep. Ilhan Omar, the first-term congresswoman from Minnesota who has been accused of using anti-Semitic tropes in several tweets over the last several months. In February, she specifically called out AIPAC in a tweet that suggested that congressional support for Israel was based on money from the pro-Israel lobby; Omar’s tweets eventually led to a congressional resolution denouncing anti-Semitism among other forms of hate.

“Hatred of Israel is creeping from the margins towards the center of our politics,” said Kohr. “These attacks on all of us are painful, precisely because the other side is trying to isolate us from our friends.”

Unlike last year, in which Kohr made a point of reiterating AIPAC’s support for a two-state solution, he made no mention of the two-state solution or of Israel’s policies towards Palestinians in the West Bank.

This year’s conference comes amid some of the strongest pushback against AIPAC from left-wing critics that the organization has ever faced. MoveOn, a progressive advocacy organization, called on Democratic presidential primary candidates to boycott the conference, while J Street called on primary candidates to denounce Israeli Prime Minister Benjamin Netanyahu from the podium if they spoke.

Netanyahu’s speech also comes after an unusual moment in which AIPAC condemned the right-wing embrace of the Meir Kahane-inspired Otzmah Yehudit political party; it was a rare rebuke of an Israeli prime minister. Critics noted that shortly after that rebuke, AIPAC invited Netanyahu to address the conference, in what many believe will be a campaign rally for the prime minister.

As part of its opening program, a former IDF paratrooper presented a security argument for Israel’s control of the Golan Heights. In a move that seemed to surprise members of his own administration and many interpreted as a gift to Netanyahu, President Trump announced that the United States, in a significant policy shift, would recognize the Golan Heights as Israeli territory. Though security experts widely agree that Israel could not give up the territory, especially with Syria’s current instability, critics worried that the move could open the door to Israel annexing the West Bank, foreclosing the possibility of a two-state solution.