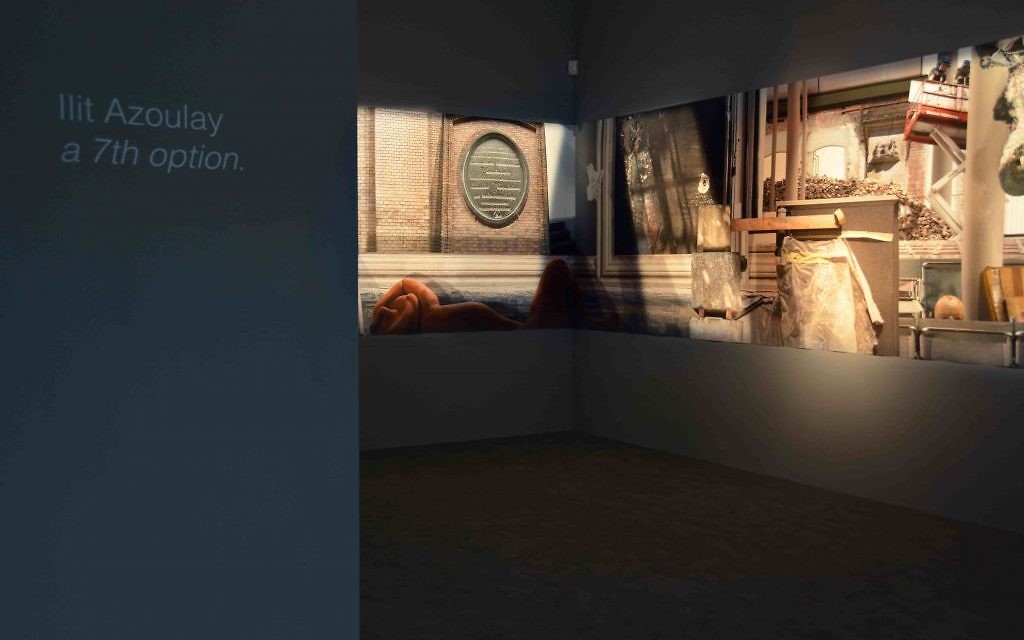 Evil and rebellion lurk beneath the surface of Ilit Azoulay’s “a 7th Option,” on view at the Andrea Meislin Gallery. Initially, the single photomontage looks like a building undergoing renovation. On second look, it is a bizarre assortment of objects — a shrunken head, a carving of a “Jewish Sow,” a pile of stones at a worksite and more. I thought I stepped into someone’s weird dream.

To decipher the objects, you have to dig like an archeologist. I turned to the show’s catalogue, written by curator Jonathan Touitou. It describes Azoulay’s painstaking research about nine of the photos in the montage, all taken while she was in residency at the Kunst-Werke Institute for Contemporary Art in Germany.

Several were taken in Regensburg, a medieval city that survived World War II and is now a World Heritage site. According to the catalogue, the carving of the “Jewish Sow” on the Regensburg Cathedral is the oldest (c. 1230) example of the anti-Semitic motif. Its curlicue tail broke off when it was hit by a falling gargoyle. The Jewish Sow has no apparent connection to any of the other photos. However, the catalogue illuminates a tantalizing layer of recent history that ties it to one. Azoulay found a curlicue at the base of the Regensburg Cathedral, below the carving of the Jewish Sow. When she returned to the Kunst-Werke Institute, she buried it in the soft cement around the reconstructed doorframe also included in “a 7th Option”– a delightfully sneaky act.

Unfortunately, the catalogue’s description of seven of the other objects in the photomontage left me guessing. I felt compelled to visit Azoulay’s installation, “Shifting Degrees of Certainty” at the Museum of Modern Art’s “Ocean of Images: New Photography 2015” exhibition.There, 85 photos, including those in the photomontage, are arranged like a medieval map, accompanied by an audio guide. I listened to clinical descriptions of her research. The unfolding mysteries were fascinating, some quietly horrifying, and a few funny.

Azoulay leaves it to the educated viewer to connect the objects and to create a story. For me, in the end, a 7th Option was laden with darkness, with a sense that Germany’s history of inhumanity and anti-Semitism will ineluctably remain in hidden layers, even as Germany rebuilds itself into an open and tolerant country.

"a 7th Option" is on view at the Andrea Meislin Gallery, 534 West 24th Street, Manhattan, through January 16th.

Caroline Harris is an amateur photographer and a partner at the law firm GoldmanHarris, LLC.