YEHUD, ISRAEL — Liftoff happened exactly on schedule at 3:45 a.m. Israel time, prompting a raucous cheer from the cafeteria at Israel Aerospace Industries, where 500 employees and their families gathered to watch the launch of Israel’s historic lunar mission.

Israel hopes to become the fourth country in the world to land a spacecraft on the moon, with the launch of the unmanned spacecraft Beresheet from Florida’s Cape Canaveral on Friday. If successful, the 160-kilogram (350 pounds without fuel), four-legged spacecraft, about the size of a car, will also be the smallest and cheapest spacecraft to land on the moon.

But after the initial cheer, the room fell silent, engineers holding their breaths as the rocket escaped the earth’s atmosphere and reached an altitude of approximately 69,000 km (42,000 miles).

At 4:23 a.m., another cheer went up as the command center in Yehud, where Israel Aerospace Industries is headquartered, received the first data from Beresheet as the spacecraft prepared to separate from the rocket. At 4:25 a.m., Beresheet separated from the Falcon 9 rocket that launched it into space, successfully deploying its landing legs in the first test of its ability to function under its own power. The spacecraft will now travel about for seven weeks before reaching the moon on April 11.

Exhausted but happy engineers posed for selfies with a larger-than life balloon replica of the spacecraft before heading home.

Previously, Russia (as the Soviet Union) and the United States have landed on the moon. China landed an unmanned spacecraft on the far side of the moon in 2013. 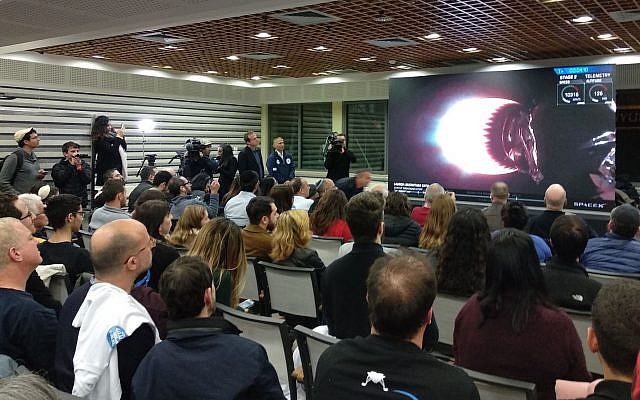 Hundreds of engineers and their families gathered in the Israel Aerospace Industries cafeteria in Yehud to watch a live feed of the launch of the Beresheet spacecraft on February 22, 2019. (Melanie Lidman/Times of Israel)

“This launch for us, the people who worked on the development and building of the spacecraft, is like a birth after a long pregnancy,” said Ehud Hayan, a space systems engineer at Israel Aerospace Industries. “When the spacecraft leaves the rocket, that’s it. Once it’s in space, we can’t do any more tests or adjustments. It’s the first time it will be working alone, starting its functions. And once everything starts working, the motors are going and the pictures are streaming, you’ll feel as if there’s something alive.”

Hayan said the launch is usually one of the most stressful parts of a space operation, but because they have outsourced the launch to the commercial space company SpaceX, the Israeli engineers couldn’t do anything except sit back and watch the launch, hoping for the best.

“We had a successful launch, we were injected into a good orbit, separated well, and have good communications,” said Dr. Ofer Doron, the general manager of the Space Division at Israel Aerospace Industries, after Beresheet separated from Falcon 9.

There is a small problem with one of the star trackers, which helps the spacecraft orient itself using the position of the stars, but Doron said there are other ways that the spacecraft will be able to maneuver onto the correct path.

He noted that this is the first time that a deep space operation is totally funded by private donors. “Everyone is looking at us to see if it will work,” he said. “Now, Europe and the US are looking at this model, changing their strategy. Instead of being responsible for everything, they are looking for commercial options.”

Hayan said the project’s shoestring budget of $100 million for development and production was limited by what they were able to fund raise. In comparison, NASA space shuttles cost about $1.5 billion, including development. One of the requirements for participation in the Google LunarX challenge was that the entry not be associated with a government. Google ended the LunarX contest in 2018 with no winners. 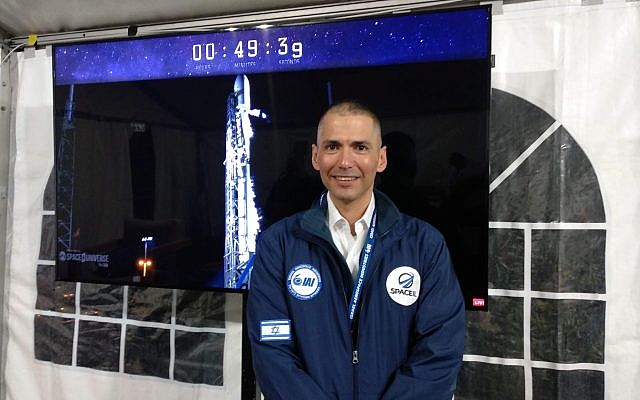 Ehud Hayan, a space systems engineer at Israel Aerospace Industries, just before the launch of the Beresheet spacecraft from the Yehud command center on February 22, 2019. (Melanie Lidman/Times of Israel)

The Israeli government eventually contributed about NIS 7.5 million ($2 million), said Hayan. “We will never be NASA, we are a small country, with a small budget,” said Hayan. “The percentage of our space budget to the GDP is much smaller than other Western countries.” However, Beresheet set out to prove that space travel could happen on a budget, without billions of dollars of government support.

Space travel is going the way of Uber and the sharing economy, with national space agencies looking to cut costs by using “ride shares” to hitchhike into space on existing commercial launches.

The Falcon 9 rocket that launched Beresheet into space also launched a large geo-communication satellite and other equipment for the US Air Force. While Elon Musk of SpaceX has cornered the market on commercial rocket launches, SpaceIL and IAI are hoping to find a niche in inexpensive robotic moon landings, so space agencies or, one day, private individuals or organizations, could send cameras and research equipment to the moon for their own purposes.

Hayan said that he thinks the commercialization of space travel is an overall positive thing, despite its origins as a sort of national identity. “Look at SpaceX and what they did to the cost of launches,” he said. “They cut down on the cost by almost ten times. They brought new ideas, like reusable rockets. And now [Elon Musk] is even talking about sending humans to Mars. This is amazing, we didn’t imagine this. The companies are really thinking farther ahead than what the national agencies were doing.”

For Liav Rotenberg, one of the spacecraft controllers, Friday’s launch was “a dream that’s finally being realized.”

“I can’t believe it, I remember back to my first days here,” said Rotenberg, who volunteered at IAI in high school and begged to be on the engineering team, despite his age. During the next 60 days, Rotenberg will take shifts in the command center in Yehud overseeing the spacecraft’s onboard engines. The engines make minute adjustments to the spacecraft’s trajectory, allowing it to make larger and larger elliptical orbits around the earth until it is pulled into the moon’s orbits.

Beresheet will circle Earth six or seven times in a series of growing ellipses before jumping into the moon’s orbit on April 4. The spacecraft will also circle the moon in a series of increasingly smaller ellipses, until it is expected to drop down into the Sea of Tranquility, on April 11 around 8 p.m., give or take an hour, according to SpaceIL CEO Dr. Ido Anteby.

The spacecraft will measure magnetic fields on the moon, data which will be transferred to the Weizmann Institute to help scientists study how the moon was formed millions of years ago. Beresheet will send information for approximately two to three days before the sun’s rays are expected to melt parts of the communication system, ending the mission.

Beresheet will land on the moon in between the detritus left from the Apollo 12 and 15 missions. Anteby said there isn’t any plan in place to bring the spacecraft back to earth. “That will be up to our children to solve,” he said.

The Beresheet team hopes that the excitement around Israel’s first moon landing will have an “Apollo effect,” when space travel in the 1960s inspired hundreds of thousands of children in America to study science and aerospace engineering. 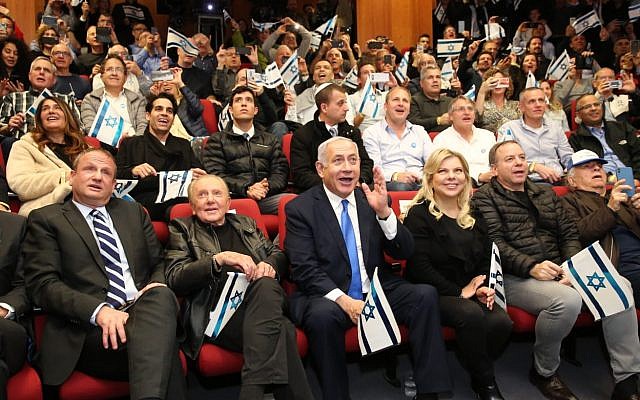 Prime Minister Benjamin Netanyahu with his wife Sarah on one side and South African philanthropist Morris Kahn on the other, watch the launch of the Beresheet spacecraft from the Yehud command center on February 22, 2019. (SpaceIL/via Times of Israel)

SpaceIL actually has more educators than engineers, including 100 volunteer educators who work in outreach at schools.

Eli Miller was one of the original volunteers in the education division, starting in 2012. “There were a lot of moments when we thought it wouldn’t work, or that we wouldn’t get the money,” said Miller.

Miller said 2017 was a real low point, with one of the Google LunarX prize deadlines approaching. Google originally extended the deadlines a few times before concluding the contest with no winner in March 2018. “There were a lot of times we asked ourselves, how will we ever do this?” said Miller, who estimates that he has given talks about Israel’s race to the moon to 5,000 to 6,000 people. “It really is amazing to be here, after all that.”

Miller has spoken to a range of groups, from 800 soldiers in the air force to engineers and school kids. The initiative also does outreach with special needs groups. “When we do talks with special needs groups, we teach them to count backwards, which can be very challenging for them, because we want them to feel like they are part of the launch,” said Dr. Ofer Doron, the general manager of the Space Division at Israel Aerospace Industries.

“Around here, we say the sky is the lower limit.”