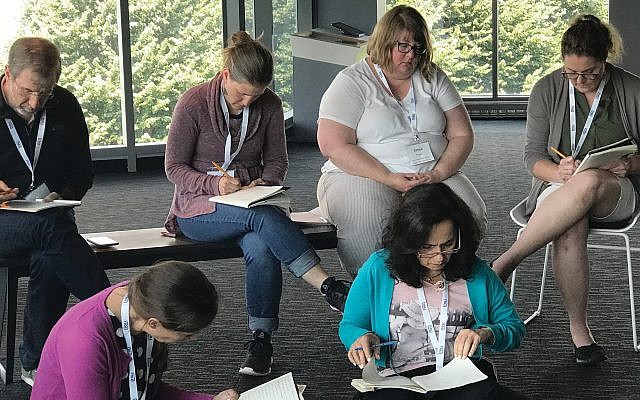 Two weeks before Yom HaShoah, which occurs next Thursday, a high school teacher in rural Michigan gave a presentation about the Holocaust at a genocide conference at Michigan State University. While a colleague was developing a Holocaust Remembrance Day program for next week, he explained, he was planning a Shoah education program he will co-direct this summer.

The teacher, Corey Harbaugh, is not Jewish, but he is counted as a success story of a low-key national Holocaust-related teacher training initiative that has recently expanded its scope.

Harbaugh, who serves as director of teaching and learning at the public school system of Fennville, Mich., is a long-time participant in The Olga Lengyel Institute for Holocaust Studies and Human Rights (TOLI). The program is an outgrowth of the Memorial Library social justice and Holocaust education foundation founded by Lengyel, a Romania-born Holocaust survivor and philanthropist.

The program’s seminars in the United States, Israel and Eastern Europe have trained more than 2,000 educators, from the middle school to university levels, how to teach about the Holocaust.

The vast majority of the participants are non-Jewish, mid-career teachers, and many of their “hundreds of thousands” of students had never met a Jew or learned much about Judaism, said Sondra Perl, program director of TOLI (TOLInstitute.org).

The program, based in Ms. Lengyel’s spacious Upper East Side apartment (she died in 2001), was initially funded by her estate. As TOLI has increased its activities, adding 10 satellite training seminars around the country, it has begun to seek outside funding, including a start-up grant from the Conference on Jewish Material Claims against Germany.

The number of applicants has jumped in the last two years, paralleling an increase in uncivil political rhetoric and physical/verbal attacks on minority group members in the U.S., Perl said. “The desire is high.”

While a wide range of organizations — including the Anti-Defamation League, Yad Vashem and the Jewish Foundation for the Righteous — offer their own teacher training programs about the Holocaust, Perl said, TOLI differs in two major ways: It teaches about Jewish life as well as death, incorporating attendance at synagogue Shabbat services and a kosher Shabbat meal in its itinerary; and instead of giving participants a set curriculum, it gears its sessions around the participants’ individual questions and pedagogic needs.

“A dialogue model” is how Perl described TOLI’s orientation. Local seminars focus on such topics as civil rights, refugees and asylum, and the status of Native Americans.

“The focus … is on best classroom practices,” Harbaugh said in an email interview.

Some two dozen teachers from around the country will take part in TOLI’s subsidized 11-day seminar here in June. They will stay in Columbia University dorms and visit the Museum of Jewish Heritage-A Living Memorial to the Holocaust, hear lectures by experts on the Shoah and testimony from Holocaust survivors, and prepare lesson plans for their classrooms.

Harbaugh, who was a teacher fellow in the program’s New York Seminar a decade ago and has subsequently led several satellite seminars in Michigan, said, “Everything I do in Holocaust education can be attributed to TOLI.”

“I may not be part of the Jewish community, but I’m part of the human community,” Harbaugh said of his interest in Holocaust education. “I do not want to live in a world where the Holocaust has been forgotten.

“I grew up in a small rural Michigan town, and the Shoah was not part of the formal or informal curriculum,” continued Harbaugh, a master teacher with the USC Shoah Foundation. He called TOLI “the most generous, teacher-centered organization I’ve ever worked with.”

Harbaugh said he’ll keep taking part in TOLI activities. “I made a promise to survivors that I would carry their stories back to my students. I do not intend to break those promises.”