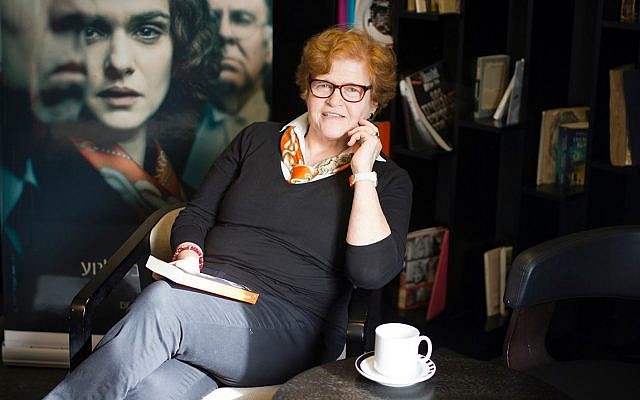 Deborah Lipstadt photographed in front of the poster for the 2017 film "Denial," based on her book "History on Trial: My Day in Court with a Holocaust Denier." Via Facebook

In a Facebook post, Lipstadt noted that the rabbi of her own Atlanta-area synagogue, Young Israel of Toco Hills, “unequivocally condemned,” Young Israel’s stance, she said she “too must take a stance.”

“I cannot be associated with an organization that gives such racism, celebration of violence, and immoral policies a “heksher.” Having just written a book that calls for people to speak out and take action when they see antisemitism or prejudice of any kind, it would be duplicitous of me to remain a member of an entity that has the name ‘Young Israel.’ …”

“At this time of rising antisemitism, Jew hatred, and prejudice of all kinds, each of us — and not just our spiritual leaders — must speak out and act individually and collectively. We must become, as I said from the pulpit at our service after the Pittsburgh tragedy, the unwelcome guests at the dinner party, speaking out when we hear something hateful, prejudicial, and wrong.”

Lipstadt’s abrupt move is an indication of the passions fueled by Netanyahu’s courting of the Kahanist Otzma Yehudit party.

Jewish Power is seen by many to be an extension of Rabbi Meir Kahane’s Kach party, which the U.S. deemed a terrorist organization and which Israel banned from the Knesset in 1988.

An array of centrist and liberal American Jewish groups and religious movements has criticized the merger as giving legitimacy to a fringe, racist movement.

The National Council of Young Israel, a traditionalist Orthodox association of 175 synagogues that tends to take hawkish stances on Israeli issues, is the first major American Jewish organization to defend the prime minister’s actions.

“Prime Minister Netanyahu acted to get right-wing parties to merge in order to meet the threshold necessary to secure a victory in the election,” read a statement Monday by Farley Weiss, president of the National Council of Young Israel. “We understand what Prime Minister Netanyahu did, and he did it to have ministers of the national religious and national union parties in his coalition.”

i have resigned my membership in Young Israel of Toco Hills, a synagogue that i have truly enjoyed being part of. …