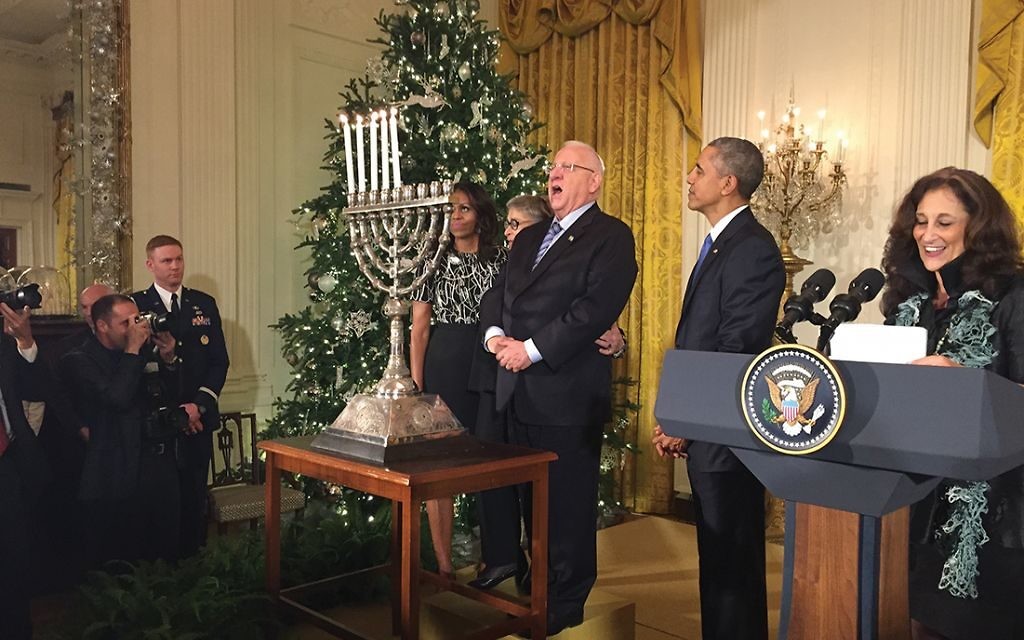 How far does the light of the Chanukah candles extend?

For Susan Talve, a St. Louis rabbi who recited the blessing at last Wednesday afternoon’s Chanukah candle-lighting ceremony at the White House, it was a chance to illuminate many of the ills besetting the nation and the world.

But several of those in attendance and a number of bloggers expressed outrage that she used the event to promote such things as the Black Lives Matter movement, opening America’s doors to “all immigrants and refugees,” cleaning “up the fires of toxic nuclear waste,” “getting guns off our streets,” and “justice for Palestinians.”

One of the guests, Abraham Foxman, former national director of the Anti-Defamation League, told The Jewish Week: “It was appropriate for a rabbi to bring a spiritual message and historical perspective; it was inappropriate to engage in a personal political advocacy diatribe. She is entitled to her views, but one should have a sense of proportion as to where and when to voice them.”

Ezra Friedlander, founder and CEO of the public relations firm that bears his name, said he was “a bit surprised at the tone and the content of her remarks. It certainly struck me as not in sync with what you would think when you bring so many different people — especially so many Jewish people — into a room. … She spoke in generalities — strident generalities — and many coded references,” he continued. “It wasn’t necessary.”

Rabbi Talve told The Jewish Week that she is “sorry if it [her remarks] were divisive. I really am. … I can appreciate that people felt that way.”

She explained that she believes these are “desperate times and there is no higher calling for us than pikuach nefesh — the saving of a life. As Rabbi [Abraham Joshua] Heschel said, if our prayers don’t lead us to action, they can be in vain.”

Rabbi Talve said it was the first time she had been invited to the White House and believes it was because of her activist role last year during the Ferguson riots. She said most of the comments she had heard about her remarks were positive.

Among those who agreed with her was Steve Sheffey, an Obama delegate in 2012 and the editor of a pro-Israel newsletter in Chicago.

“She really spoke to the Jewish values that most American Jews hold,” he told The Jewish Week. “I thought she was very energetic. The crowd loved her and she really connected the spirit of Chanukah to our own age in terms of how we have the power to fight for what is right — even though we may be few in number. … It was entirely appropriate.”

One blogger, however, was upset that the rabbi used the Arabic word, “Insh ‘Allah” (Allah Willing), at one point in her remarks. But Rabbi Talve said it was Israeli President Reuven Rivlin, who was standing behind her with President Barack Obama, who first used the word in agreeing with something she said.

“I was surprised [to hear it] and I just repeated it,” Rabbi Talve explained. “I grew up with a Jewish grandfather who spoke Arabic, and when I heard it coming from behind me, it felt like it was such an affirmation of a big tent.”