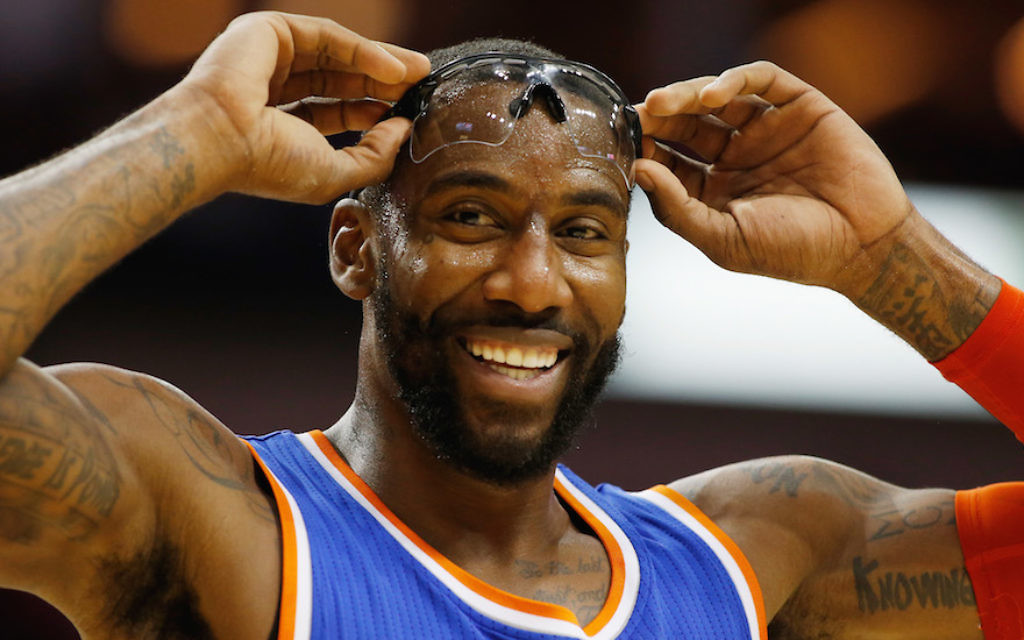 For those obsessed with the search for Jewish big-time athletes, Amar’e Stoudemire, 33, was an unexpected dream and predictable heartbreaker — in short, the perfect punchline for a Jewish jocks joke.

Finally, here was a bona fide NBA superstar — one of the most explosive, fiercest dunkers no less — who publicly started to identify with the Tribe… and promptly turned into one of the zeydes shooting around at the Jewish Y.

Stoudemire’s up-and-down NBA career came to an end this week with his retirement announcement on Tuesday.

A first-round pick in the 2002 NBA Draft, Stoudemire — who was extremely athletic for his 6-10 frame — teamed with Steve Nash to turn the Phoenix Suns into the league’s most electrifying offense.

He missed virtually the entire 2005-06 season after undergoing knee surgery, but returned to peak form for several more campaigns. Stoudemire then signed a $99.7 million, five-year contract with the New York Knicks in 2010.

Soon after joining the Knicks, he excited the passions of Jewish sports fans when he told the New York Post that he had become “spiritually and culturally Jewish.” The All-Star said he was keeping kosher and would celebrate the High Holidays. (In 2013, he would tell JTA that he considered both of his parents “Hebrew.”)

Stoudemire delivered in his inaugural season as a Knick, leading the team to the playoffs for the first time in years and bringing the cool back to Madison Square Garden. But his final three seasons in New York were characterized by a slew of chronic injuries that often prevented him from playing and sapped the juice that had made him one of the best.

He would bounce to the Dallas Mavericks and Miami Heat. Then this week Stoudemire announced he was retiring — as a Knick, after signing a symbolic contract with the club.

It’s hard not to look at his real stint with the Knicks as a story of unfulfilled potential. To be clear, though, this is not a takedown — it’s a lament. Reb Amar’e deserved better for exciting and embracing those who longed for a Jewish basketball star.

We’re hoping those rumors about Stoudemire signing to play in Israel are for real. While we wait, let’s celebrate our favorite stories about him over the years.

Stoudemire went to Israel on a spiritual quest. In a TV interview with an Israeli sports network, he sported a large white yarmulke, spoke a few words of Hebrew and conditionally committed to fasting on Yom Kippur and avoiding chametz on Passover.

In addition to telling the Post that he is a Jew “spiritually and culturally,” he said his trip to Israel was inspired by his finding that his mother was ancestrally Jewish.

The New York Daily News reported that Stoudemire was interested in opening a Hebrew school that would “focus on teaching the language and Jewish history.”

JTA compared the Hebrew speaking skills of Amar’e and fellow NBA great Shaquille O’Neal, who dropped some Jewish phrases on “The Daily Show” with Jon Stewart.

The star was married, Jewish style, on the roof of his Manhattan apartment.

Stoudemire purchased a stake in the Hapoel Jerusalem team. ESPN reported Tuesday that he could potentially play for the team after retiring from the NBA.

Stoudemire set up a campaign that helped children donate a certain amount of money to the volunteer Jewish ambulance service for each point he scored for the Knicks during the 2014-15 season.