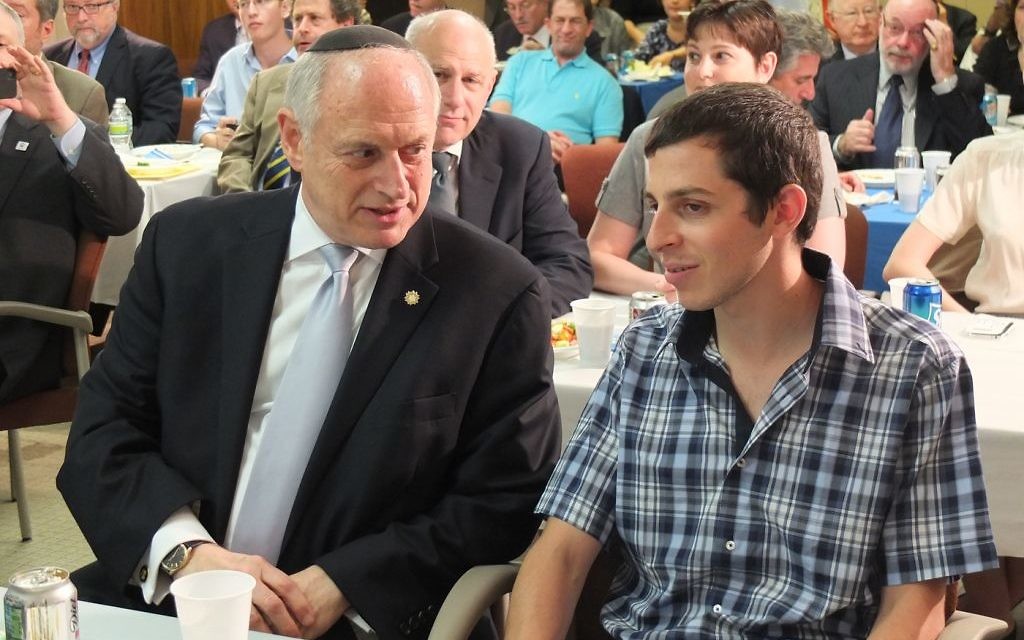 Gilad Shalit, the 25-year-old Israeli soldier freed by Hamas terrorists in a prisoner exchange in October, thanked the Jewish community here today for their support during his more than five years of captivity.

“I want to thank everybody for their efforts – here in the U.S. and all over the world,” he said in Hebrew at a special meeting of the Conference of Presidents of Major American Jewish Organizations.

Prior to greeting the group, Shalit watched a video of the rallies and demonstrations in his behalf that had been held here over the years. Malcolm Hoenlein, executive vice chairman of the Conference of Presidents who was sitting next to Shalit, said
Shalit told him that he had heard about some of the events “but didn’t realize the extent of it.”

The video included pictures of the Times Square billboard for Shalit, the Freedom Flotilla up the East River, and Gilad Shalit Day last year at City Hall.

Richard Stone, chairman of the Conference of Presidents, explained that Shalit knew some English before his abduction June 25, 2006, in a cross-border raid near the Israeli-Gaza border. But he said Shalit had forgotten much of it because his captors “did not let him speak English.”

As Shalit stepped to the microphone, those in the room stood, applauded and recited the Shehecheyanu prayer, which is said on special occasions to thank God for “giving us life.”

Kofman said Shalit said it was “not obvious to him that so many people had worked so hard for his release and that he’s grateful.”

Asked if had known about any of this activity while he was held prisoner, Shalit replied: “Yes, I heard a little. I could watch some Arab media and heard a little through the radio – whatever was possible to hear.”

Shalit appeared shy and clearly overwhelmed by the reception, which brought several in the room to tears.

He also appeared as thin as a rail. He said he had gained about seven or eight kilos – about 16 pounds—since being released October 18 in a prisoner swap in exchange for 1,027 Palestinian prisoners.

Over the years, the Conference of Presidents has welcomed the parents and wives of Israeli soldiers who had been abducted by Palestinian terrorists and for whom the organization had held rallies. All were later found to have been killed or have never been accounted for. This was the first time one of those prisoners came home alive and had come to say thank you.

“It means a lot,” said Hoenlein later. “It’s good to have something to celebrate once in a while. It’s good to celebrate good news, just like we celebrated the Prisoners of Zion” when they came out of the former Soviet Union.

Hoenlein presented Shalit with a 6-inch thick volume of letters and e-mails that were written to him during his captivity by “thousands of people.”

Stone told Shalit that the Jewish community had made his freedom “a priority” and called his appearance before the Conference of Presidents “a momentous occasion.”

“There is nothing we could do to compensate you for the loneliness and suffering you endured, but there was not one day since your captivity was announced that we did not think of you,” Stone said. “I hope that is of some solace to you.”

Hoenlein told Shalit that he had become “everybody’s son and grandson – you created unity among the Jews, between Israel and the diaspora.” Ari Henig, a sports writer for the Israeli newspaper Yediot Aharonot, accompanied Shalit to the event. Shalit, a sports fan who reportedly kept his sanity during his captivity by watching sporting events on television, is sharing a sports column with Henig. The two recently attended the NBA finals.

“Tomorrow we’re going to Kiev for the semifinal soccer game on Sunday,” Henig said, referring to the Euro 2012 soccer championships.
Hoenlein told Shalit that he hopes he would get on with his life and one day “put this behind you.”

Shalit said his plans are to “work to find myself and to learn a profession.”