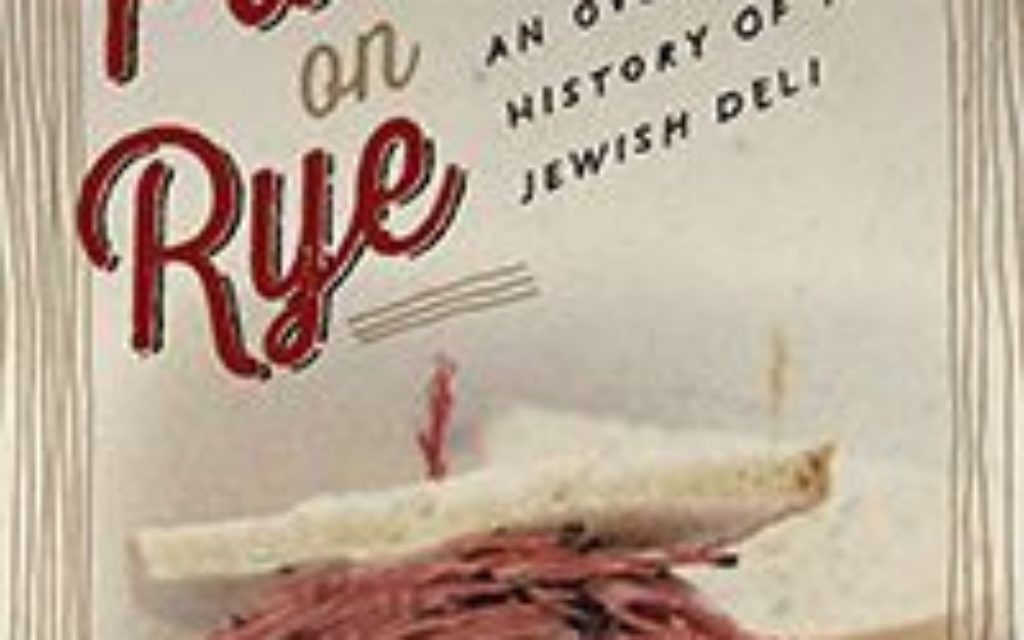 Who knew that the delicatessen was actually a man cave, one filled to overflowing with potent symbols of male virility?

In a talk Wednesday evening at the Mid-Manhattan Library, Ted Merwin, author of the just-released “Pastrami on Rye: An Overstuffed History of the Jewish Deli” (NYU Press), made the case that sex and deli go together like, well, pastrami and seeded rye bread.

What were Jewish families doing when they would “Send a Salami to Your Boy in the Army,” as the World War II ad for Katz’s Delicatessen urged? Merwin laughed knowingly and said, “They were sending a phallic symbol,” a symbol of potency for their sons to gain strength to fight the enemy. It was also, to be sure, a clever marketing rhyme and, presumably, a touch of home for a homesick soldier half a world away.

And the overstuffed, skyscraper pastrami and corned beef sandwiches that became the standard, iconic fare of the New York deli? They were stand-ins for the aspirations and appetites of the Jewish male as he made his food-rich journey from the Lower East Side to the gilded suburbs, and from the margins of American life to the very center of it, with a wallet that may have been overstuffed as well. Holding one of those meaty sandwiches in your paws (“There’s something about men and beef,” Merwin quipped), was like holding the American Dream.

But the deli wasn’t only about sex, of course. Merwin argues that, in important ways, the deli came to replace the synagogue as the central address for Jewish life as Jews became more secularized, more assimilated and increasingly unmoored from the traditions of the Old Country. It was a place, as the sweet theme song for the hit TV show “Cheers” proclaims, “where everybody knows your name, and everybody’s glad you came.” Like the Irish pub, the Italian social hall and the African-American barbershop, the deli, which was largely a male domain, Merwin said, was a place to recharge your Jewish batteries with your fellow landsmen.

Interestingly the deli, a recreation of the meat palaces in Paris and Munich, didn’t take off in the early days of theJewish immigrant experience on the Lower East Side. Few Jews had enough money to eat out, Merwin pointed out. But in a generation, Jews had gained a foothold in American society and were decamping to the outer boroughs. It was there, in Queens and Brooklyn and the Bronx, where the delis flourished. Jewish influence in the theater industry gave the deli a show-biz glitz as actors, comics and agents gathered at the Stage and Carnegie delis in the theater district. (Merwin writes about theater for The Jewish Week.) An average Jew could get a mile-high sandwich named for Al Jolson or Eddie Cantor — a brush with fame, with a side of coleslaw.

But sex was never far from the menu. When Alvy Singer (Woody Allen) courts Annie Hall (Diane Keaton), he takes her — where else? — to a Midtown deli. It’s a setting, Merwin said, where he’s in his element, “he’s in control” of the dating situation. And he can only shrug and look quizzically as she orders a pastrami on white bread with lettuce and tomato.

And then there’s that unforgettable “I’ll have what she’s having” orgasm scene in Katz’s Deli from “When Harry Met Sally.” In the ultimate gender switcheroo, Merwin explained, the man cave of the deli had morphed, been crashed, so to speak, by a woman — and a non-Jewish one at that. The story of the deli, then, which moves from the provincial corners of Jewish life in New York to Middle American pop culture, had climaxed.