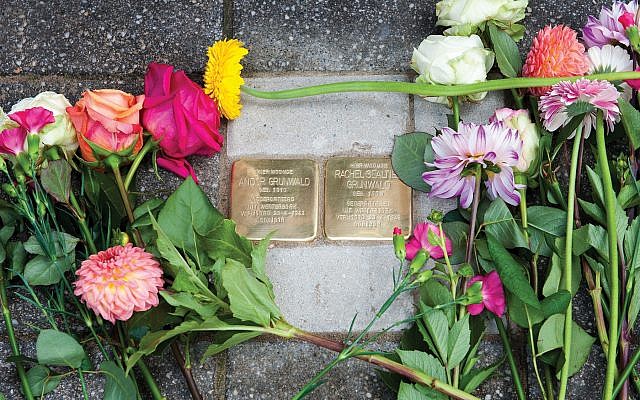 The Stolpersteine, or stumbling stones, for the author’s relatives on a street in Amsterdam. Photos by Janiek Dam

As promised, he appeared promptly at 10:35 a.m. A man on a mission. Wearing his signature large-brimmed khaki hat, German artist Gunter Demnig stepped out of his van carrying two buckets with tools and material needed to precisely and efficiently perform his task of placing two handcrafted brass stumbling stones, or Stolpersteine, engraved perfectly with my grandparents names, birthdates, deportation site, date and site of their deaths.

On this day, Oct. 4, 2018, Demnig would place 40 such stones in and around Amsterdam, repeating his effort from the day before. I bore witness with my family and close friends, many of whom had traveled from my community in New York City, supporting the culmination of my 30-year journey of discovering my Jewish roots, and the fate of my grandparents and their extended families in the Netherlands.

A mere baby when placed in hiding, my Aunt Lida was full of anticipation. We had waited four years for this day but didn’t quite know what to expect and how the neighbors would react. My anxiety slowly dissipated as curious but friendly onlookers in the multicultural middle-class neighborhood joined us. A café owner slowly crossed the street. “What’s happening?” she asked. “We are placing memorial stones in front of my grandparents’ home where they last lived before being deported in 1942,” I replied. “Please join us!” She thanked me.

My father, his brother and two sisters had likely been smuggled out of the kindergarten where they had been rounded up before transport to the Westerbork concentration camp in the northeastern part of the Netherlands. Their parents Andor and Rachel were across the street at the Hollandische Shouwburg, a predominantly Jewish theater-turned- deportation site by the Nazis. Due to overcrowding, children under the age of 12 were separated out and placed in the kindergarten. 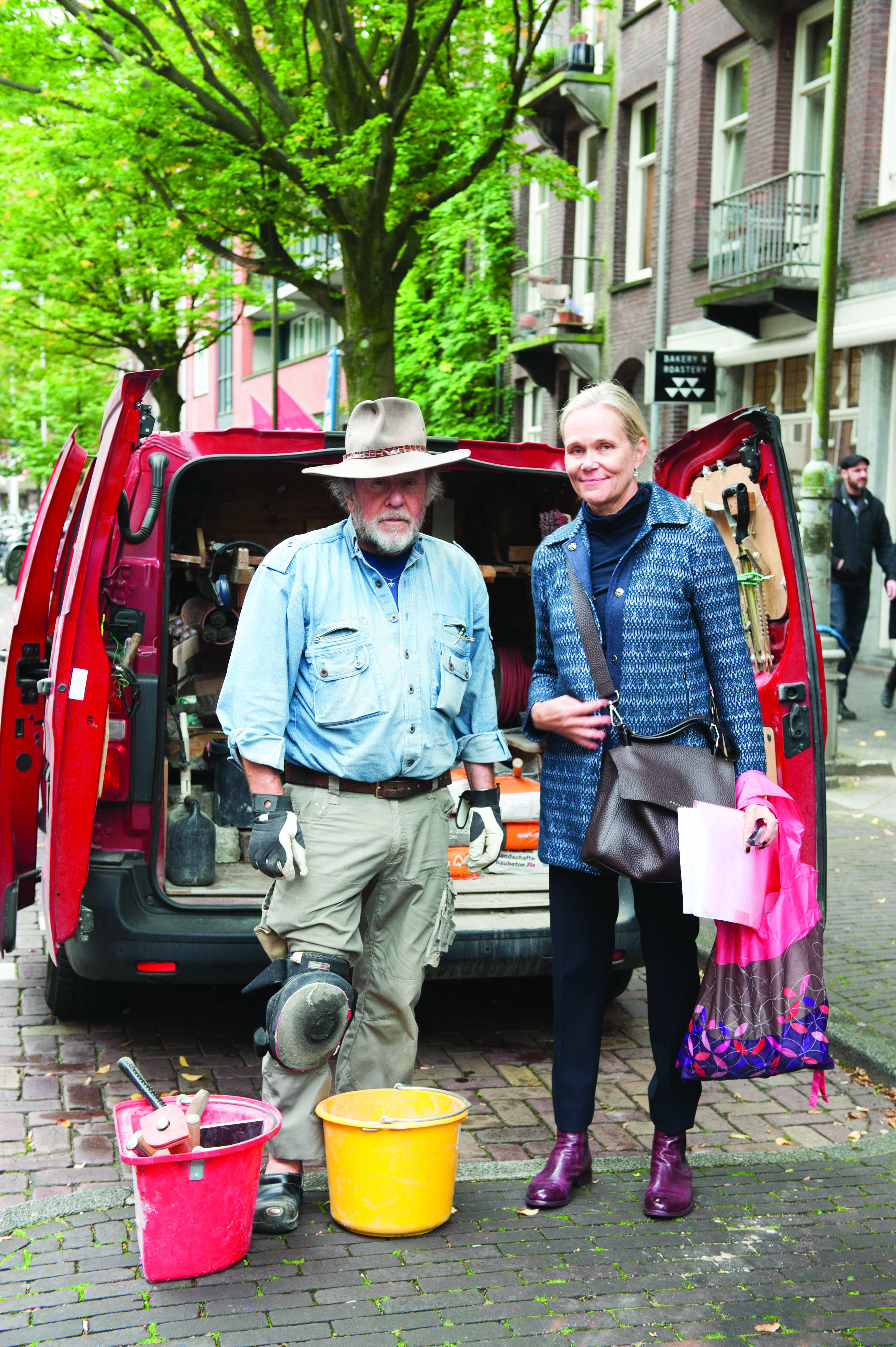 When Andor and Rachel arrived at Westerbork, they were placed in a punishment barack, straffbarak, with the explanation that the whereabouts of their four children were unknown. The likeliest scenario is that the four young siblings had been saved by the late Johann van Hulst and his team, who rescued over 600 children out of the kindergarten, placing them in hiding.

The siblings were separated and hidden during the war years. They all survived but were orphaned. No one else from the family survived. No grandparents, aunts, uncles or even a single cousin. Too young to remember their parents, the traumatic experience deeply etched life-long scars into their souls. Only my aunt Lida was able to come to the ceremony. My uncle would visit alone the following morning. The eldest sister passed away 10 years ago, and my father was unable to attend.

A couple currently living in the adjacent building on Pretoriusstraat to where Andor and Rachel lived, shared with us that they had researched the history of the street and learned that 70 percent of the residents had been Jewish families. No one had returned. They are raising funds to place Stolpersteine in their memories. I was touched and moved to tears, comforted to know that my grandparents’ memorial plaques will likely be spared vandalism. They promised to watch over them. Overwhelmed with hope, sadness, relief and even some closure, it was a profound and unforgettable day.

The group of about 30 gathered outside on the sidewalk recalled their lives, read a poem and played music. And we recited Kaddish together.

Having created the largest decentralized memorial in the world, Gunter Demnig has placed 67,000 Stolpersteine in 22 countries since 1992. The project’s name invokes many illusions, as in stumbling — the stones cannot be avoided or bypassed, as in the case of a central memorial place; these stones represent a much deeper intrusion of memory into everyday life.

Demnig travels by van from country to country, often returning to Amsterdam, as 80 percent of the country’s Jewish population was killed in the Holocaust. His work in the city is far from complete. At 11 a.m. Demnig disappeared into his van like a superhero without uttering a word; humble and focused on the holy task ahead of him. He returns names to the nameless, and in the absence of grave sites, he gifts generations of people a space to memorialize.

I will continue to support the Stolpersteine project; it’s a never-ending sacred endeavor. Stones for Rachel’s two newlywed brothers and their wives; and in memory of my father’s baby cousin born in Westerbork concentration camp and murdered a few months later in Auschwitz who like my aunt Lida, was named Alida Matilda. For Rachel’s twin sister Frederika Goudsmit, who dwelled a block away with her husband and four children. Four children, little girls who had been flower girls in Rachel’s and Andor’s wedding. Murdered at Sobibor.

May their names never be forgotten and serve as a daily reminder of what happened 75 years ago; as well as the fate of their families, their neighbors, the 102,000 Dutch Jews, and the six million who perished in the Shoah.

Ulrika Citron, who lives in New York City co-chairs the USC Shoah Foundation Next Generation Council and serves on the National Holocaust Museum of Amsterdam’s Board of Governors.