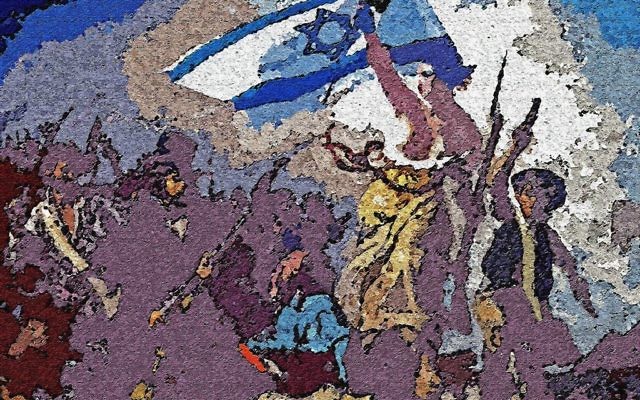 I am an Israeli American religious Zionist Jew. That’s a whole lot of identities to cram into a petite 5’2 body, but somehow, I make it work, as do many other short Jewish girls. But what do all those identities mean?

I am Israeli-American. I often say that means that I am American enough to be polite, but Israeli enough to get things done. I really feel as though I have the best of both worlds – the Israeli sababa and the American panache. It also means that I am sometimes a bridge, explaining cultures to both sides. I can explain to Americans why many Israelis will be upset if you compliment their babies (it’s casting the “the evil eye” on the baby) and I can explain to Israelis that when Americans say, “How are you?” they are not expecting a real answer.

When I tell you all this, you probably have a picture of me in your mind – and give or take a few purple streaks in my hair, you are probably pretty spot on.

I explain my background in order to drive home my next point:

Especially since I put religious significance in Israel’s existence, I am furious that my religion has been commandeered by power hungry politicians masquerading as rabbinical authorities. The lack of separation between religion and state in Israel damages our state and damages our religion. It is unhealthy for a modern democracy to be ruled by religious authorities – religious authorities who don’t even recognize the largest streams of Judaism, who claim to be the only true decision makers for the entire beautiful tapestry that is the diverse Jewish world.

The Rabbinate’s blacklist is only the latest in a string of incidents that highlight the problematic nature of the Rabbinate and its fiefdom over all religious and lifecycle services in Israel. When even mainstream Orthodox Rabbi’s “kashrut for eidut” is brought into question, as it was when the Rabbinate released a list of rabbis they don’t trust to sign a document bearing witness, we can see that the current situation is damaging the fabric of our religion.

One of the clearest examples of this that I have witnessed was a struggle that I am deeply involved in, the fight for women’ rights in the mikvah. Since there is no separation of religion and state, the mikvaot in Israel are state run institutions. The Rabbinate for many years had a chokehold on women who wanted to observe this mitzvah in any way other than the stringent ultra-Orthodox method that they mandated. This led to some utterly ridiculous situations, like the time I was told by a mikvah lady that I shouldn’t immerse because “it wouldn’t count anyway,” or when a friend of mine had the police called on her after being turned away from four different mikvaot.

Thank g-d, the supreme court ruled in our favor. There was one particular moment, when we were having a meeting with a prominent official from Jerusalem’s religious affairs bureau, that truly helped me understand this struggle. When faced with the fact that due to his overbearingly stringent policies many women had stopped going to the mikvah altogether, he said, “If they don’t want to immerse the way I think they should, I don’t care if they immerse at all.” This experience showed me how muddled the line between religion and politics had become, and how dangerous it is both for our democracy and for the integrity of our religion.

To me, Judaism is a way of life, a lens through which I see my lifestyle. But that’s the point- that’s my way. Who am I, who are any of us, to dictate how any person should practice their Judaism?

The time has come to put political concerns away, take back our religion, and become a truly Jewish and Democratic state – with a Jewish cultural character and a democratic government.

Naava Shafner is a social activist living in Jerusalem with her husband and three kids. Her work centers on empowering women,and  helping Jerusalem and Israel become an Or LaGoyim,a light unto the nations.