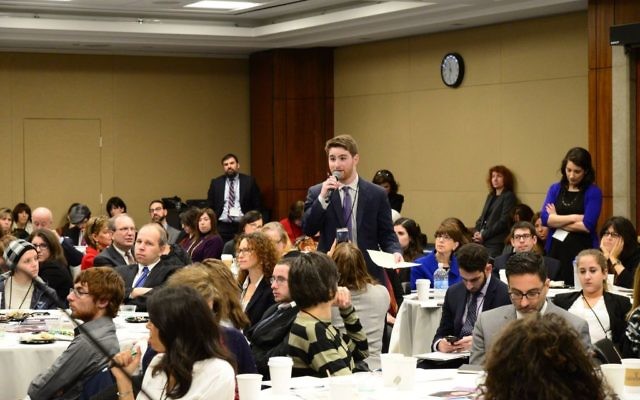 Editor’s Note: The New Normal blog has been covering efforts by disability activists and advocates this summer who are opposing the Republican healthcare bill. Today’s blog is a speech that was delivered at Tuesdays with Toomey, a weekly gathering of activists at Pennsylvania Senator Pat Toomey’s office.

My name is Adam Fishbein and I am from Elkins Park, PA. I am a Politics, Policy and Law Three-Year Scholar at American University and I would not be where I am today without the support I receive through Medicaid. I was diagnosed in second grade with Tourette Syndrome, AD/HD and other disabilities that affect my ability to learn in the traditional classroom setting. Tourette Syndrome is a neurological disorder characterized by tics, which are uncontrollable sounds and movements. People with TS are almost always diagnosed with other associated disorders, such as ADHD, anxiety, social skills deficits and learning difficulties.

I have to take a combination of five medicines twice a day just to be able to function in most environments, especially in school. Without assistance from Medicaid, my parents wouldn’t be able to afford the thousands of dollars’ worth of medication I need each month.
Since my diagnosis, I’ve relied upon a team of professionals to support my needs, including a psychiatrist, psychologist, behaviorist, occupational therapist, speech therapist, an executive function coach and a wraparound. These services were made affordable because of my access to Medicaid and special education. Were I to add up the annual cost of these therapies, they’d far exceed my parents’ annual income – and both of my parents are professionals.

By third grade, my public school was no longer able to meet my educational needs. My right to a Free and Appropriate Public Education ensured my access to the education and therapies I needed. For me, that included three years of residential treatment and six years of specialized private school. As expensive as this may sound, its price does NOT compare to the price of the loss of an individual’s potential. My mother has told me many times she believes without intervention, I would’ve ended up homeless, in jail or worse. Under the GOP’s Healthcare bill, in the first 10 years of implementation, Medicaid funding would drop 26 percent from the CBO’s projected baseline. In the 10 years after that, 35 percent.

If our kids’ physical and mental health needs are not met, they cannot fulfill their potential. Senator Toomey, why aren’t you representing us — all of us? As of this April, there were close to 3 million Pennsylvania citizens enrolled in Medicaid and CHIP. By supporting proposed cuts to Medicaid, you are being short sighted and sentencing children with special needs to a life of unrealized potential.

Adam Fishbein is a student at American University and is a Member of the Board of Directors at PA Tourette Syndrome Alliance.