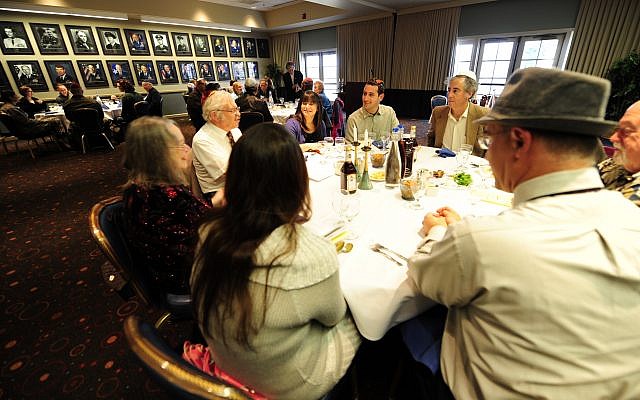 Passover is a time when families, some spanning generations, gather for the seder dinners and retell the story of the Exodus. This also creates an opportunity for children, grand-children and even great-grandchildren to engage with their elders and listen to stories from long ago. If your older relative is a Holocaust survivor, gaining first-hand knowledge of those experiences can create great empathy. In addition, they may also have information that could help your family as well as descendants of other Holocaust survivors. Obviously such conversations have to be handled with  sensitivity.

Late last summer, Dr. Paul Weindling and I began investigating Nazi medical/pharmaceutical interventions against women which were administered without their knowledge, let alone their consent. The focus of our research is on the administration of substances to women which led to amenorrhea and for some, infertility. Ironically, this history has been hidden in plain sight precisely because of the routine nature of these medical interventions. Like Dr. Weindling and I, these women are still trying to make sense of these experiences that have barely been mentioned, let alone understood, in the history of the Holocaust. In fact, some colleagues questioned the utility of this research endeavor, commenting, “If it had ever happened, we would have known about it by now…Right?”

Long before the myriad of Shoah memorial archive projects began, female survivors were silenced on topics related to sexuality, infertility and menstruation – or lack thereof.

Why does information about the maternal health of female survivors still remain a blank? Indeed their previous testimonies reference neither menstruation nor infertility. They have reported that no other researcher or interviewer ever asked them questions on such “sensitive” topics. Long before the myriad of Shoah memorial archive projects began, female survivors were silenced on topics related to sexuality, infertility and menstruation – or lack thereof.

Of the many dozens of women who contacted us over the last 6 months, 100% ceased menstruating immediately after their arrival in the camps. Dr. Weindling and I  were surprised to hear this not only from survivors of concentration camps that included Auschwitz, Bergen Belsen, Ravensbruck and Theresienstadt, but also from survivors of slave labor camps. For the duration of the war, they were terrified that they were “not women anymore.”  Equally revealing was that we heard identical descriptions of amenorrhea from Polish Jews who were incarcerated in the ghettos and malnourished  before being deported to the death camps as we did from Hungarian Jews, who were “at home” until just after Pesach, 1944. Despite nutritional and body mass index differences, their reported experiences are eerily and disturbingly alike. Many did not menstruate again until years after the war. Others had repeated miscarriages. Some never conceived and instead adopted or attempted to adopt children.

Of the many dozens of women who contacted us over the last 6 months, 100% ceased menstruating immediately after their arrival in the camps.

The vast majority of these women grew up in  observant homes and had hoped to have large families of their own. They were devastated when their questions about their fertility difficulties, which became apparent after the war, were summarily dismissed.

Each woman suspected that a substance was administered to her upon arrival in the camps.  Whether that substance was introduced by hiding it in food rations or by injection, it caused their immediate amenorrhea and subsequent difficulties with fertility. Most of the women sought out medical help after the war, before even marrying, because they had yet to regain their menses. Others went to see physicians because they were unable to conceive. In addition, the rate of miscarriages experienced among Holocaust survivors was considerably higher than that of the general population.

Some physicians suggested that these women were suffering from psychosomatic trauma or that the malnutrition they experienced interfered with their menstrual cycles and ability to conceive.

These women, and their families, remain eager for answers.

Often women were told that “something” must have been done to them in the camps but had no information as to what that might have been or how to undo its effects. Other than their husbands or their physicians, these women told no one of their sorrow and infertility – not even fellow survivors.

These women, and their families, remain eager for answers.

Dr. Weindling and I continue to search for first-hand accounts and information for these women, in an effort to discover what was administered to them and to determine possible effects on their descendants. I am conducting interviews in English, Yiddish, Hebrew and French.

As time moves forward there is an added urgency to collect this information. If you have a sense that your family has information that is relevant to our research, I hope you will be willing to share it with us.

Peggy J. Kleinplatz, Ph.D. is a Canadian  Professor in the Faculty of Medicine and Director of Sex and Couples Therapy Training at the University of Ottawa. Her current research focuses on optimal sexual experience. She has a particular interest in sexual health and access to sexual education and health care in the elderly, disabled and marginalized populations.