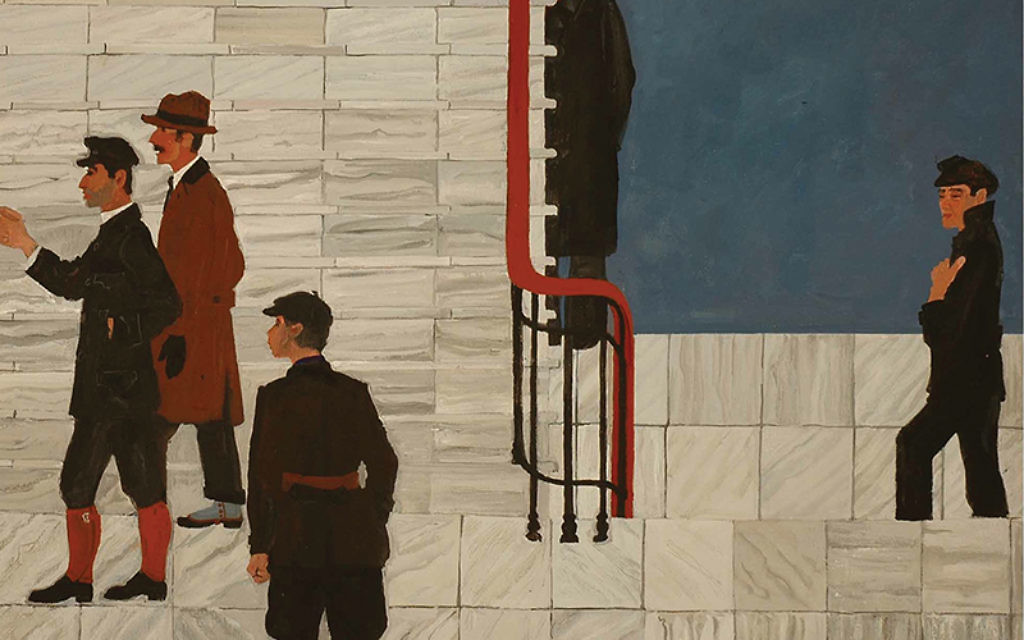 The often overlapping artistic contributions of two sons of Odessa are paired in a new exhibit at the Yeshiva University Museum.

While many viewers will be familiar with Isaac Babel’s outstanding literary works, the show, “Odessa: Babel, Ladyzhensky and the Soul of a City,” is an opportunity to see the storied port city on the Black Sea anew, and to encounter the talent of Yefim Ladyzhensky. The painter’s work is original, powerful and beautiful, deserving of recognition he didn’t achieve in his lifetime.

Featured are more than 50 paintings and drawings — many shown here for the first time — along with brief texts from Babel’s work and sound and film installations. If your timing is right, you’ll turn a corner in the gallery and get a glimpse of the famous steps of Odessa in a film “Jewish Luck” at the same time that you’ll see a parallel view in the painting, “The Movies Come to Town.” Babel wrote the screenplay of the 1925 film.

The son of a master fish pickler, Ladyzhensky became a member of the official Union of Artists, and designed theater sets and costumes for theater and film. In his studio, he also created colorful paintings that tell stories, inspired by his childhood or by Babel’s work. The canvases portray street life, Jewish family life at home, Jewish gangsters, culture, cafés and, later, tense times for Jews. With strong compositions, many are almost symmetrical, with subjects at the center, and finely drawn details like balustrades, lace on a clothesline, cobblestone streets, crowds with every face distinct. Often his dog appears, and sometimes the artist too appears. In “In Memory of Our Father (Shiva),” the usually spotted dog is all black, the artist is seated, and his mother is weeping, the room distinguished by beautiful patterns.

While some describe Ladyzhensky’s work as naïve or folk art, it seems more sophisticated for his use of color, light and perspective.

Jacob Wisse, director of YUM, sees him as more of a modernist, and suggests that he has much in common with the French painter Pierre Bonnard, who also created beautiful patterned surfaces. Wisse also noted that this is the first time that a show at YUM includes paintings with full-frontal nudity. In “Bandits Off To Their Sweethearts,” several men, dressed in white suits with flowers in their lapels, bouquets in their hands and cigarettes dangling, are riding in horse-drawn carriages. The viewer also sees their women preparing for them.

“His work is about real life,” collector Lyudmilla Khononov tells The Jewish Week in an interview, explaining that Ladyzhensky didn’t follow a particular style of painting or believe in “isms” — that he painted what he saw. “He painted from his heart and expressed his soul — that is what makes his work so unique.”

When the artist left Moscow in 1978 for Israel, he wasn’t allowed to take his paintings inspired by Babel’s “Red Cavalry” with him, and he burned those and many other paintings, about 2000 canvases, before he left. In Israel, he created a new series of “Red Cavalry” paintings, not in color as previously, but in pen and ink on paper. This series of 18 works — all from the Khononov collection — have not been exhibited before. Ladyzhensky said that “Red Cavalry” played “the same role that the Bible and myths did for a multitude of artists — a reason and a stimulus for expressing my feelings and experience.”

Ladyzhensky’s “The Movies Come to Town,” above, and “The Past is Always With Me.” CREDIT: Collection of the artist’s family

Yet, as uplifting as this exhibition is for its showcasing of vibrant and unforgettable work, there’s an underlying sadness here, for the tragic fate of both men. Babel was executed in 1940, after being arrested and forced to confess to spying. Ladyzhensky took his own life in 1982.

“Ladyzhensky loved the city of Odessa, loved the culture of Judaism,” says Khononov. “All he wanted to do was express himself. A lot of Soviet artists were not allowed to do so, and in one way or another the government destroyed them, some faster than others.”

David K. Shipler, the Pulitzer Prize-winning author and former bureau chief for The New York Times in both Moscow and Jerusalem, first met Ladyzhensky in Moscow and later spent time with him in Israel. He tells The Jewish Week that when the painter first arrived in Israel, he expected to be celebrated.

“He was crushed when he wasn’t met with great accolades — that surprised him, hurt him, and embittered him. In the end, he was being ignored in a place where he expected to be hailed. That really helped to create his depression.”

Even when he had a solo show at The Israel Museum, he still felt slighted.

Shipler adds, “He was unable to fit into either society.”

Khononov, who came here from Odessa as a child in 1978, did not know the painter, but is now in close contact with his family.

“There’s not much I remember of Odessa. When I look at his paintings, they tell me where I am from,” she says. “It is my mission to try to show his work as much as possible. People get in touch with the past and don’t forget it.”

“Odessa: Babel, Ladyzhensky and the Soul of a City” is on view at the Yeshiva University Museum, 15 W. 16th St., Manhattan, through Nov. 13. Yumuseum.org.