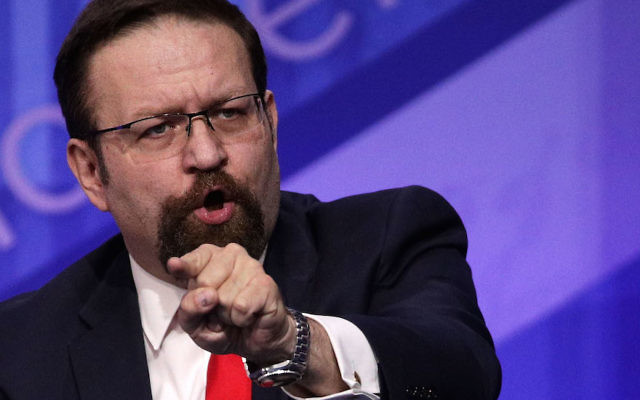 White House advisor Sebastian Gorka, who has been dogged by accusations that he was a member of a far-right Hungarian group, has left the Trump administration.

Reports on Friday said that Gorka had submitted a letter of resignation to the White House. The letter was first released by The Federalist website.

“[G]iven recent events, it is clear to me that forces that do not support the MAGA promise are – for now – ascendant within the White House,” Gorka wrote in the letter, referring to President Donald Trump’s campaign slogan to Make America Great Again. “As a result, the best and most effective way I can support you, Mr. President, is from outside the People’s House.”

A White House official told reporters that Gorka did not resign, but confirmed that he no longer works at the White House.

Several media outlets have reported that the announcement of Gorka’s leaving his position at the White House came on Friday evening as the country’s attention was focused on Hurricane Harvey.

Gorka’s exit comes a week after White House chief strategist Stephen Bannon left his post. Bannon had been under fire since he began working for the Trump campaign last year. He has been criticized for calling the Breitbart news website a platform for the “alt-right,” a far-right and white nationalist movement that includes anti-Semitic figures and followers.

“I will be working with Steve, with you, with the Breitbart crew,” Gorka told Breitbart political editor Matt Boyle during the interview.

An investigation by the Forward quoted leaders of the Historical Vitezi Rend, a namesake of a defunct order of merit that existed under Hungary’s Nazi-allied government, saying Gorka had sworn allegiance to the movement. The original group ceased to exist in the 1940s following Nazi Germany’s defeat. Gorka has worn the organization’s medal to public events, saying he does so to honor his father’s anti-Nazi and anti-communist activity. Gorka has denied membership in the Vitez Rend, the original group, but not in the Historical Vitezi Rand. He also has denied being a fascist or anti-Semite.

Last week, three Democratic senators asked the Trump administration in a letter if under investigation for allegedly lying when he became a U.S. citizen. Dick Durbin of Illinois, the second ranking Democrat in the Senate; Ben Cardin of Maryland, the top Democrat on the Foreign Relations Committee; and Richard Blumenthal of Connecticut in the letter asked the White House to determine whether Gorka, a native of Britain who is the son of Hungarian immigrants, concealed his membership in the Vitézi Rend when he applied for citizenship.