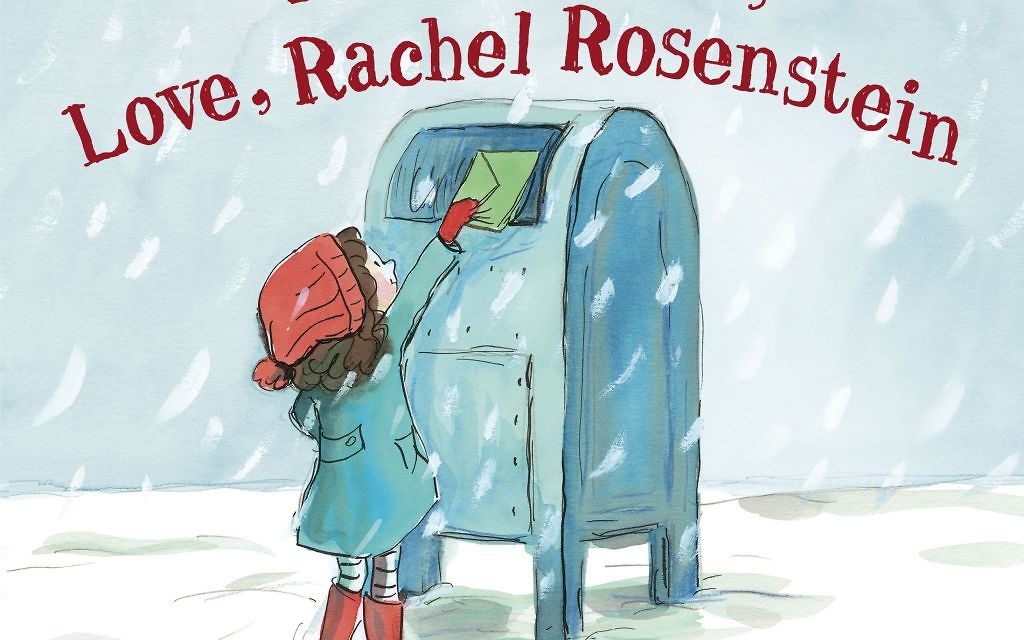 For Chanukah 2015, young readers are treated to romance in the Atlas Mountains, stories of the real lives of Israeli kids, tales of helping others in this holiday season, easy-to-follow recipes and, as always, new spins on the Maccabee story.

Rachel Rosenstein has a mega-dose of Christmas envy. While she likes hunting for the afikomen on Passover and enjoys her family’s Shabbat dinners, she yearns to celebrate Christmas as all of her neighbors do, with their houses lit up brightly, as seen in “Dear Santa, Love, Rachel Rosenstein” by Amanda Peet and Andrea Troyer, illustrated by Christine Davenier (Doubleday). A determined young woman, Rachel writes a letter to Santa and prepares her home for his arrival, with socks dangling from the fireplace. She’s disappointed that he never makes it to the Rosenstein home, but comes to realize that she’s not alone in not celebrating Christmas, and that she’s got much to celebrate. This is a warm-hearted story, written with humor by the popular actress and her friend, and illustrated in whimsical style. A portion of the proceeds from sales of this book benefit Seeds of Peace, a leadership and peace-building jointprogram for Palestinian, Israeli and Egyptian teens.

Young readers can learn about the real lives and accomplishments of Israeli children in “I Am Israeli: The Children of Israel” by Eva L. Weiss (Mitchell Lane). The reader’s guide is an appealing almost 8-year old Jerusalemite named Yakir, who is the son of the author, and he is joined by other children of diverse backgrounds who tell their own stories of their families, special interests, the origins of their names and their neighborhoods, all over the country. A girl named Gabi describes running in the Jerusalem marathon, and a boy named Quais, who lives in a Palestinian neighborhood on the eastern side of Jerusalem and walks with the aid of crutches, talks of his love of swimming. Some include recipes, like Kubbeh Soup, as it was made in Kurdistan, by one of Yakir’s neighbors. Another boy, the son of the artist Ya’akov Boussidan living in a village in the Judean Hills, shares an art project, with easy-to-follow directions. This thoughtful and lively book is part of the “Voices of Israel” series.

“Hanukkah Cookies with Sprinkles” by David A. Adler,” illustrated by Jeffrey Ebbeler (Apples and Honey Press), is a story to love. On a morning before the holiday, a young girl named Sara spots, through her window, a man picking a discarded apple out of the garbage. When she asks her grandmother why he might be doing that, the grandmother explains that he is probably poor. Throughout the day, Sara can’t stop thinking about him, and decides to leave treats and gifts for him. At their synagogue, she sees him again and she asks her mother to invite him to their Hanukkah Shabbat dinner. They all have a great time together, and he teaches Sara to juggle, sharing his gift. With vibrant illustrations, the book gently teaches important lessons about the mitzvah of tzedekah.

A small-format board book for the youngest set, “Hannukah is Coming” by Troy Newman, illustrated by Viviana Garofoli (Kar-Ben), is the story of a young family celebrating together and learning about the holiday. The title is the refrain to the book’s rhyming lines. “Down goes the sun./Join hands, everyone./Hanukkah is coming.” In Garofoli’s cheerful, full-color illustrations, the family and their dog seem more than content as “Flames burning bright./Light up the night.”

Set in the Atlas Mountains of Morocco, “The Mountain Jews and the Mirror” by Ruchama King Feuerman, illustrations by Polona Kosec and Marcela Calderon (Kar-Ben), begins with an outdoor wedding. In a story that unfolds like a charming folktale, Estrella and Yosef move from a small village to the city of Casablanca, soon after they get married. A strikingly beautiful couple, they are mountain Jews, unaccustomed to city life. They settle in, helped by city relatives who arrange an apartment and a job for Yosef. Their lives soon turn upside down, because of a mirror that they’d never before encountered. But, with the help of a rabbi, who also gets turned around by their mystery, they get the happy ending they deserve.

A cookbook for kids, “Sammy Spider’s First Taste of Hanukkah” by Sylvia A. Rouss and Genene Levy Turndorf, illustrated by Katherine Janus Kahn (Kar-Ben) is the 15th book in the popular Sammy Spider series. Following a brief retelling of the holiday story, the book includes a wide range of recipes, from Maccabee and Cheese to Sweet Potato Gelt to Count-to-Eight Shishkebab.” The symbol that indicates whether a recipe is meat, dairy or pareve, appears inside a stylized spider web.

Inspired by the work of Magen David Adom, “Avi the Ambulance Goes to School” written and illustrated by Claudia Carlson (Apples & Honey Press) is a story of doing good deeds and helping others. Avi is the youngest and smallest in his family of ambulances in Jerusalem, and he longs to save lives like his parents and siblings. In his trial run, he proves to be a hero. All those children who love cars and trains and all forms of transportation, as well as those who enjoy good-natured stories that share Jewish values, will enjoy this book, the first in a projected series.