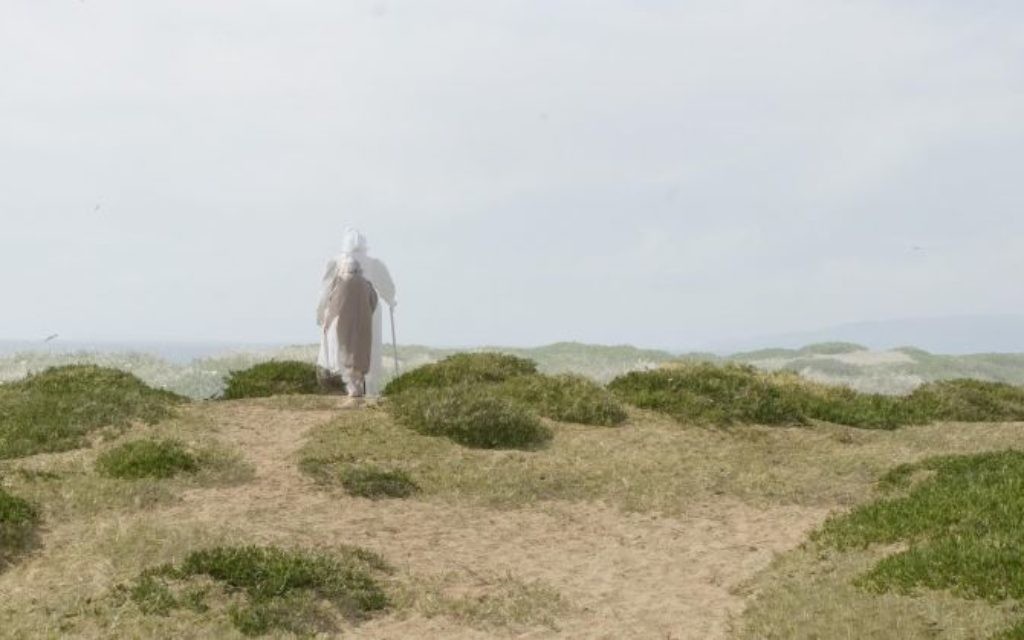 Walking along East Broadway towards the Educational Alliance, I surrender to early culinary memories of the Lower East Side — sweet treats at Uncle Shia’s (Susswein’s) bakery and pizza at Noah’s Ark at a time when kosher pizza was still an exotic treat. The Forward building still dominates, an elegant reminder of the Lower East Side’s once bustling Jewish community but the old Educational Alliance building, which shares the street, is happily unrecognizable after a recent gut renovation: The Manny Cantor Center, part of the Educational Alliance network, is now a sparkling new, open and airy modern space but with the same warm feeling my Aunt Pola described when she worked there decades ago.

Ushering you into this welcoming, contemporary center is the “Manny Cantor Wave” (2015), a colorful, dynamic installation specially created for the space by Susan Fishman and Elena Kalman. With its goal of calling attention to the importance of water in our lives, “Wave” is an appropriate introduction to the exhibit currently on view: "Rooted: The Ecological Duality of Nature and Jewish Identity." The works on display explore the connection between Jewish identity, art and nature from the perspective of both the artist/creator and the viewer.

The show grew from a series of residencies that Art Kibbutz established over these past years; the most recent used as its theme Shmitta, the biblically-mandated Sabbath year in which the land in Israel is left to lie fallow and all agricultural activity is forbidden. Some of the pieces in the exhibit were created in the Art Kibbutz creative oasis, while others were produced in various places and times but all have in common a relationship with the artists’ roots, their connections to the earth and to their Jewish identity.

As Rabbi Joanna Samuels, executive director of the Educational Alliance Manny Cantor Center stated in her introductory address, “What does its mean to be rooted, to let things grow? Shmitta feels very alive when I think about the current struggles in Israel. If everyone on all sides could just loosen our tight grips on the land, just for a moment, we might be able to let something grow and be nourished."

It’s a beautiful idea, letting go of the root in order to allow for growth and the pieces in the exhibit all played with different notions of rootedness, using materials ranging from dirt, branches and bones to augmented reality. Jackie Brookner, a doyenne of the ecological, feminist art movement, was represented by two pieces, both grounded in the use of actual soil. In “Native Tongues” (1997), using only soil and water, the artist created oddly beautiful and surprisingly sturdy sculptures, invoking tongues in their many manifestations — mother tongues, foundations and our primal bond with language and earliest roots. A second Brookner offering, “Untitled” (1997), would normally be called a painting but no paint was used, only soil and water. Conceptually, the piece hearkens back to the abstract expressionists but a small anthill of soil lurks on the bottom left of the canvas, an earthy signature grounded in dirt. Hila Amram’s "Cell Culture Club: Untitled” (2015) features an actual plant growing out of a knapsack, green and blossoming while Stephanie Osin Cohen (2015) literally creates roots of a tree extending from the gallery space in her site-specific installation, “INT. Tree.”

Cynthia Beth Rubin, on the other hand, takes a decidedly high-tech approach to nature. In her piece “Roots” (2015) she uses Augmented Reality to show source material such as plankton in water; in some ways, her art is an organism in itself.

Other well-known artists are represented here. “A Sky and Water Triptych” (2012) from Tobi Kahn’s AHRAV series is included, beautifully somber, abstract landscapes of sky and water, separated by a darker line of horizon. Ken Goldman, the Israeli artist known for his sometimes tongue-in-cheek explorations of the Jewish experience, provided “Dirty Jew” (2014), a self-portrait of the artist drenched in the organic milking waste of his kibbutz; reclaiming the term “dirty Jew,” Goldman positions himself as a “proud hard-working man of the land.”

The works of the Grande Dame of the eco-feminist movement, Helène Aylon, are a centerpiece of the exhibition, curated by Aimee Rubensteen with Yona Verwer. A pioneer of eco-feminist art now in her 80s, Aylon looks at religion from a feminist point of view. In two pieces from The Turnings series (2010), Aylon depicts herself as a “foremother,” placing herself in the trajectory of Jewish history and tradition and facing her own intimations of mortality. “I went to trees, bushes, water, aspects of nature. I turned to the right and turned to the left. I didn’t get any answers but I’m still turning.”

I’m not sure that I understand all the answers implicit in this interesting and thought-provoking exhibit but the questions are worth the journey.