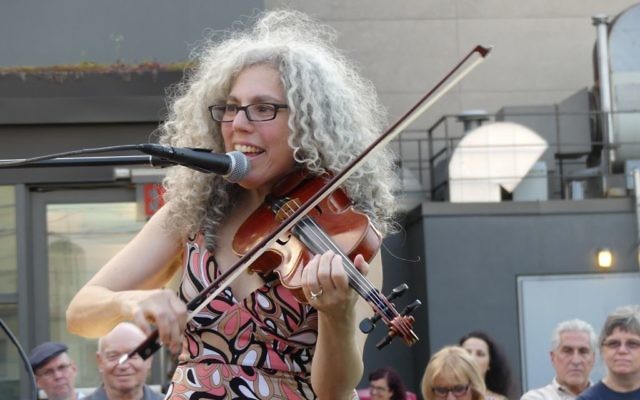 They were fiddlers on the roof, every of one them, just trying to scratch out a simple tune without breaking their necks, as Tevye put it in his hard-won metaphor for life. While Danny Burstein was communing with God as the iconic dairyman in “Fiddler on the Roof” on Broadway, uptown, 20 klezmer fiddle students were communing with nature, and Jewish tradition, Thursday evening on the roof of the JCC Manhattan.

They were learning at the knee of klezmer fiddle master Alicia Svigals, a founding member of the Klezmatics and a powerful improviser, as she led a master class/concert billed as, well, “Fiddlers on the Roof.” Not that the students weren’t in some peril up there, like the fiddler of old. After all, Svigals was imparting to them the hard-to-learn, improvisatory tricks of the klez trade — the magic, like a jazzman’s sense of swing — that gives klezmer its at once happy-sad, manic-mournful essence. “This is stuff that’s impossible to notate,” Svigals said. “You need another klezmer fiddler to show you.” Bending notes, slurring notes, sliding from one note to the next — all in search of the krekhts: that cry, that sob, that Jewish blue note that gives klezmer its emotional punch and tethers Jews from Anatevka to Amsterdam Avenue.

Svigals led her charges, young and old alike, through a book of klezmer tunes; there were frailachs and kazatzkas, slow dirges, frenetic foot stompers, a lilting waltz, even a Hungarian march rhythm.

Along the way there were shots of whiskey and rugelach for the band members and the audience of about 150, a grace note reminding the assembled that klezmer is wedding music, after all. And then as the sun set and the wind kicked up, a bird flew high arcs overhead, the aged wooden water towers in the near distance brought to mind Tevye’s shtetl, Svigals’ wild salt-and-pepper hair blew across her face and a smile creased the corners of her mouth. The band was swinging.