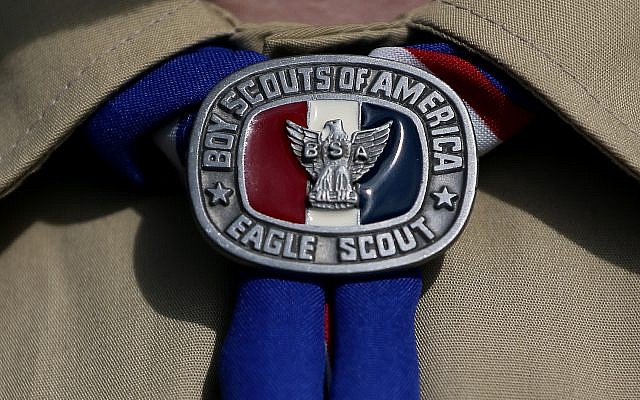 On February 1, 2019, Boy Scouts of America—the iconic American scouting organization—changed the name of its 100+ year old Boy Scouts program to Scouts BSA and opened its membership to girls. This long-awaited change is something that many people, including myself, dreamed about. I always admired Eagle Scouts and was attracted to the opportunity for frequent camping trips combined with learning outdoor and leadership skills, but I never thought I would have the same chance as my brother to participate in this outdoor-focused program.

When I learned of this revolutionary change to allow girls into Boy Scouting (now Scouts BSA), my dreams had finally come true, and my many hours of complaining about the unfairness of my brother’s frequent campouts and hikes was over. (Boy Scouts of America already offered three other programs—Cub Scouting, Venturing and Sea Scouting—to girls, but they were not as readily available to me.) I immediately started researching exactly what Scouting would entail and became a founding member of Scouts BSA Troop 792, Soaring Eagle District, Heart of America Council. Shortly after our troop was formed, I was elected Assistant Senior Patrol Leader, which is the second-highest leader in the troop.

The opportunity to be a trailblazer in Scouting reminded me of Ruth Bader Ginsburg and how she became a trailblazer in the legal field—only one of nine women in her Harvard Law School class of 500. Today there are as many female law students as male. In just four months, thousands of girls have joined Scouts BSA, and I hope that one day equal numbers of boys and girls will participate in Scouting. 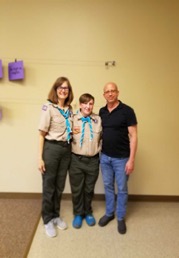 Nina Baran with her parents at her first “Court of Honor” ceremony in which she received the badges and rank placement she earned. Photo courtesy of Nina Baran

Since joining Scouts BSA, I have learned the Scout Oath and Law, how to tie various knots and how to catch and fillet a fish. I have also learned valuable leadership skills and tools that I will use for the rest of my life. The moral values and strong ethics that Scouting teaches are things everyone can learn from and use, and they are important regardless of gender. Everyone should strive to be “physically strong, mentally awake and morally straight.”

Although the transition into allowing girls has been largely well-received and most people have been incredibly supportive, it hasn’t been perfect. A few male scouts and leaders have referred to us as “girl Scouts” instead of “Scouts,” which is unfortunate both because they are using the term “girl” in a degrading manner, while also suggesting that we are somehow separate from the boys them and not full Scouts. On a recent camp out where we shared a few activities with a boys-only troop, a few boys accused us of watching Netflix on a phone (something that is never allowed on a campout), when in fact we were practicing knots and playing a card game after having spent the morning fishing. I’m sure that these boys’ intent was not malicious or inherently sexist, but it suggested that they thought we might be less serious about Scouting than they were. While it may take time for some people to get used to having girls participate in Scouts BSA, I think that our presence, being the best Scouts we can be and speaking up when we hear inappropriate remarks, will dispel people’s preconceived notions and negative attitudes about girls in Scouting.

I’m a Scout, but I’m also a Jewish Scout. Religion is an important part of the Scouting program as the Scout oath includes the line “to do my duty to G-d” and part of the Scout law is to be reverent in particular towards G-d. This reverence can stem from any religion or belief system; it is more about believing in something that what you actually believe in. This is special to me because as a student at a Jewish day school, almost all of my religious experiences are structured. But in Scouts, reverence can be unstructured, and I get to connect with G-d in an entirely different way. Instead of praying in a synagogue or at school, I get to be outside in nature experiencing the beauty and wonder of the world. I don’t have to say a specific prayer or blessing to feel a connection to G-d. This is the magic of Scouting: getting to experience something unique and special, while at the same time something so integral to who I am as a person.

I hope to become one of the first female Eagle Scouts, and when I do, I will join a long line of strong Jewish women who accomplished historic firsts. But my motivation to achieve an Eagle rank isn’t just to be “first,” it’s to learn new skills; to grow as a person, a leader and a Jew, and, most of all, to internalize these words: a Scout is trustworthy, loyal, helpful, friendly, courteous, kind, obedient, cheerful, thrifty, brave, clean and reverent.