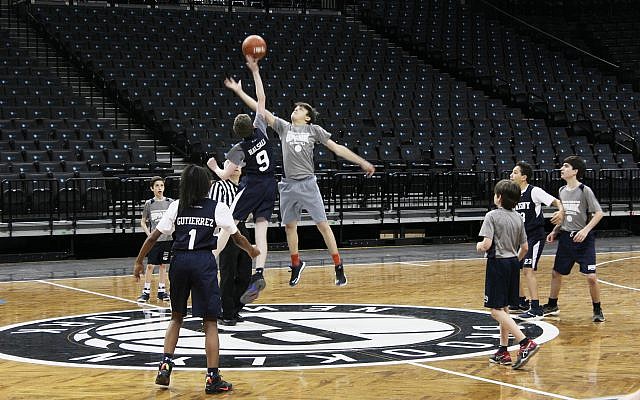 Winners on and off the court: The Solomon Schechter of Manhattan basketball team, in the gray uniforms, won its league championship Sunday at the Barclays Center. PHOTO COURTESY SSSOM

The box score from a basketball game played last Sunday in Brooklyn’s Barclays Center shows that the Solomon Schechter School of Manhattan won its league championship by a 11-0 score.

But the real winner, according to Gary Pretsfelder, principal of the Conservative K-8 school on the Upper West Side, was Shabbat.

The semifinals and finals of the CONSAT (Confederation of NY Schools and Team Sports) League, a new city alliance composed of eight small private schools, were to be played in Barclays Center on a recent Saturday afternoon. No other dates at Barclays Center were available, the Schechter School was informed.

The administration of the Schechter Spark, which qualified for the playoffs with an 8-0 regular season record, determined that unless an alternative site and alternative date could be found on short notice, the team would forfeit its chance to win the title, rather than violate the letter or spirit of Shabbat observance, Pretsfelder said.

“We stood our ground,” he said.

Then a Sunday date at the center, which is home to the NBA Brooklyn Nets, opened up.

The school’s commitment to keeping Shabbat, reminiscent of the dilemma that the Beren Academy of Houston faced seven years ago when its league of private and parochial schools agreed to schedule the team’s playoff games on Friday afternoon and Saturday night, reinforced the lessons that the Schechter School’s 140 students learn in class about the importance of respect for Jewish tradition, the principal said.

“We would not play on Shabbat,” although many of the families of the school’s students are not Sabbath observant, Pretsfelder said. “It’s a great story of a Conservative day school upholding the practice of the school, and the league working to accommodate our religious needs.”

The Schechter team — co-ed, like all CONSAT teams — defeated the Nord Anglia International School before an enthusiastic crowd of some 400 parents, friends and supporters of the four schools in the semifinals. “It’s a big deal at a small school,” Pretsfelder said.

“It was exciting and nerve-wracking – but we did well,” said Abby Theriault, a sixth-grader on the team.

“It was a team effort,” said eighth-grader Jared Levy. “All the time we had to work as a team, even if people weren’t always contributing or playing well. It was important for players to know what was better for the team.”

The 23-year-old Schechter School, an initiative of the United Synagogue of Conservative Judaism and the rabbis of nine Conservative congregations in Manhattan, was housed originally at Park Avenue Synagogue, and since 2011 at a campus on the corner of Columbus Avenue and 100th Street.

The Schechter School is the only Jewish school in the CONSAT League.

Lacking its own court, the school’s basketball team practices at rented space in the area, and plays all its games as a visitor on other teams’ courts.

“Today was a proud moment for our school community,” Benjamin Mann, head of school, said on Sunday. “We played well, we played as a team, and we feel especially good about the fact that we could partner with a league that was understanding of our limitations about playing on a Saturday and accommodating in making adjustments to the playoff schedule.”

“I feel great. Keeping Shabbat is a central value of our Jewish education,” Prets feldar said.

And winning the league championship? “That was icing on the cake.”