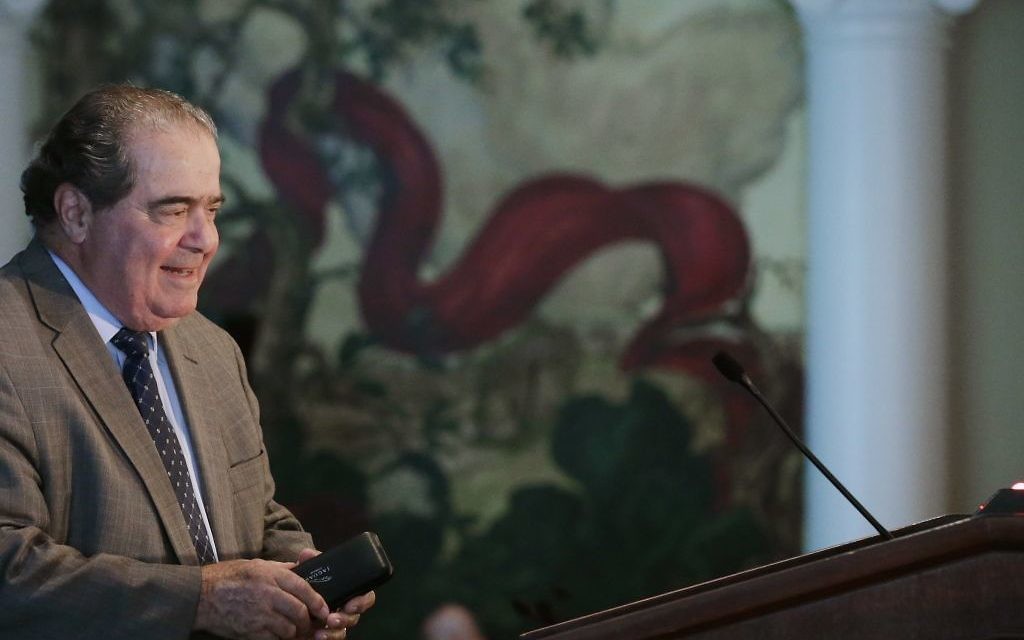 Supreme Court Justice Antonin Scalia, one of the country’s most influential jurists and a leading voice of conservatism on the high court, died Saturday at age 79. Scalia appeared at Yeshiva University in November 2013 and advanced a view on a controversial San Francisco circumcision law that seemed to cut against the grain of most of his church-state comments. Below is a Jewish Week report of that appearance.

A hero to many in the Orthodox community on matters relating to the separation of church and state, Supreme Court Justice Antonin Scalia’s comments on circumcision at a Yeshiva University forum last Wednesday night may have come as an unpleasant surprise to those who think the justice’s opinions flow from his own religious beliefs.

How would he have ruled, he was asked by attorney Nathan Lewin, had a 2011 attempt to criminalize circumcision in San Francisco succeeded and eventually made its way to the high court?

“If the practice is something that society does not want, and it’s not intended to discriminate against Jews in particular, I think the law is perfectly valid,” he said to a crowd somewhat mystified by how incongruous the remark seemed in the context of Scalia’s other church-state comments.

Lewin, who has argued almost 30 cases before the Supreme Court, many on the subject of religious liberties, sat across from Scalia on the stage of YU’s Strauss Center for Torah and Western Thought to discuss their interpretations of the Establishment Clause of the First Amendment; that clause states: “Congress shall make no law respecting an establishment of religion, or prohibiting the free exercise thereof.” Rabbi Dr. Meir Y. Soloveichik, the director of the Strauss Center and the spiritual leader of Congregation Shearith Israel in Manhattan, moderated.

Rabbi Soloveichik began by asking each of the participants what he considered the original meaning of the Establishment Clause. The conservative Scalia reaffirmed his well-known position that the early definition of the Establishment Clause was vastly different than how it is often understood today. When first written, it meant that Congress would neither establish a religion itself, nor try to disestablish religions that were already established, said Scalia, the longest-serving justice on the court.

“It surely does not mean that God has to be driven out of the public forum,” the justice said.

Lewin agreed, remarking that the modern understanding of the Establishment Clause has been detrimental to the Jewish community, as states cannot fund even secular subjects taught at day schools. He noted that when he has argued similar cases, his opponents usually include Jewish organizations such as the American Jewish Congress, the Anti-Defamation League and the American Jewish Committee.

“The Jewish community has taken this position over history, that we have to cleanse government or schools of any mention or association with religion,” he said. According to Lewin, Jews were initially concerned that the inclusion of religion in public institutions would result in proselytization. However, he said, “Time has proved that the theory of proselytization is no longer what we should be concerned with. What we should be concerned with today is assimilation.”

Scalia and Lewin touched upon several cases, including:

Scalia and Lewin did not agree on the legality of a ban on circumcision, however. For most of the evening, the former Harvard Law classmates traded playful barbs. At one point, Lewin said, “I don’t mean to question whether Justice Scalia is sometimes inconsiderate, but that’s who he is.” At another, Lewin was talking about a case he had argued before the Supreme Court when Scalia broke in and said, “And you lost again, didn’t you?”

Shuli Karkowski, a graduate of Harvard Law in attendance, said she was impressed by Scalia’s honesty, especially considering that not all of his opinions were popular with the audience.

“Even when I don’t agree with Justice Scalia, I think he takes both a consistent and principled approach,” she said. “I’m surprised that he said how he would rule in the bris case. Most justices are disinclined to speak on any matter that could possibly come before the court.”

In fact, Scalia acknowledged that, at times, he can be more forthright than someone in his position ought to be. In the interest of putting his guest at ease, Soloveichik told the justice to feel free to say whatever he wanted.

“If you want to share a secret, just share it with a thousand Jews and you’ll be all set.”