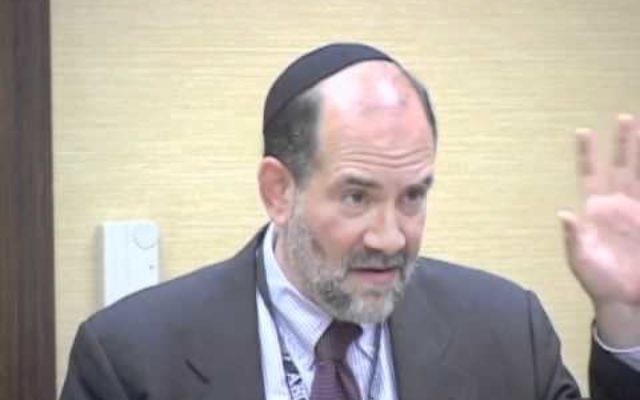 A brief statement last Wednesday evening from the leadership of the Riverdale Jewish Center, informing members that their embattled rabbi, Jonathan Rosenblatt,  “intends to step aside from the senior rabbinate” of the Modern Orthodox congregation, is being scrutinized and parsed in the community this week like a passage from the Talmud.

Raising more questions than answers, the two-sentence message seems to indicate that nine months after published reports described the rabbi’s longtime practice of showering and chatting in the sauna with boys and young men, and six months after he overcame efforts to have him removed from his pulpit, the prominent religious leader will be leaving his post soon in an effort to unify the community. Or will he?

Meyer Koplow, an attorney representing Rabbi Rosenblatt in this issue, told The Jewish Week that the rabbi, eager to leave a positive legacy for his years of service to RJC, initiated this step to help the synagogue community “heal and grow.” Koplow, who offered his services pro bono and is negotiating between the rabbi and the lay leadership, said he expected the issues to be resolved in the next week and then voted on by the congregation.
RJC’s president, Samson Fine, referred a request for comment to the brief statement that was issued.

The controversy, which began over the rabbi’s unusual behavior and later morphed into how the RJC lay leadership has handled the situation, now finds members of the community wondering if Rabbi Rosenblatt, who has led the congregation for more than three decades, is stepping down or just “aside” — and whether he is leaving his pulpit altogether or just “the senior rabbinate,” possibly staying on as rabbi emeritus or scholar-in-residence. And it is unclear when this would take place. Some believe a change in the rabbi’s status is imminent while others point out that his contract extends through July 2018. The statement, which appeared to be purposefully vague, did not indicate timing.

Another key question is whether the estimated 20 percent of the RJC membership that left the congregation last summer and created a breakaway Shabbat prayer group now known as The Riverdale Minyan will consider coming back to RJC — and if so, under what circumstances. The group is leasing space from the nearby Riverdale Temple (Reform) and appears to have coalesced into a thriving, active band of worshippers of all ages, with the younger set heading up a number of active committees, including weeknight lectures for adults and a variety of programs for children. More than 100 families are paying members of the Minyan, which often attracts in excess of 200 people on Shabbat. (It does not hold regular services during the week.)

Several participants noted that while the Minyan may have come together initially out of a shared sense of dissatisfaction with the lay and rabbinic leadership of RJC, it has become an increasingly tight-knit group. Steven Bayme, who resigned from RJC after the rabbi’s sauna activities were first published in The New York Times last May, said the Minyan has become “a real community of people who care about each other.” In particular, he noted that after his son was killed in a car accident last summer, the group became an ongoing “source of enormous support” for him and his family.

Bayme and other attendees interviewed said they left RJC out of a sense of disappointment both with the rabbi’s behavior, described as, at best, inappropriate — especially for a spiritual leader — and frustration with the alleged lack of accountability and transparency by the board leadership, which by all counts has made blunders along the way. The Minyan attendees say they are happy where they are and will be following closely the resolution of the rabbi’s status at RJC, reluctant to come back unless the rabbi leaves, with some calling for the synagogue board to resign as well.

But defenders of the rabbi maintain that the issue has always been “more about power than the shvitz,” as one longtime RJC member put it. The source, who asked to remain anonymous because of the delicacy of the situation, asserted that some of those who left had been major funders of the congregation who were unhappy with its direction and chose to leave for a variety of reasons. Supporters of the rabbi also charge those who left were “hypocrites,” noting that the great majority of the congregation knew of the rabbi’s behavior with young men for years and didn’t seem to express outrage until the news became public. Key critics counter that they actively tried to buy out the rabbi’s contract for years but were stymied by concern about legal action since no direct allegations of illegal behavior emerged. Nor have they to this day.

And so it goes.

In interviews with The Jewish Week in recent days, a number of defenders and critics, all of whom asked for anonymity, characterized the situation as very sad, given the deep rift that has resulted in the community. But conflicting narratives have emerged to explain the rabbi’s recent announcement.

One has the rabbi initiating this “step aside” move for the good of the congregation and the community. Another has him heading off a board effort to ensure that he not seek a contract renewal beyond 2018. Still another sees the rabbi as gradually worn down by the loss of key congregants, including several former RJC presidents and major donors, and hoping to negotiate his financial package before Fine, the current president, perceived as sympathetic to the rabbi, completes his term this spring.

All sides see a key issue being who will be in control of the RJC, including its lay and rabbinic leadership, going forward.

Defenders are clearly the majority of the synagogue now, which is believed to have between 500 and 550 member families. The rabbi’s supporters want to assure a dignified conclusion to his tenure. Within a day of Rabbi Rosenblatt’s brief statement, a petition began circulating among congregants, urging that he “continue to have a connection to the RJC… whether he is called the RabbiEmeritus or something else is not important. What is important is his continued presence.”

That’s precisely what a number of worshippers at the Minyan oppose. They want to see the rabbi make a clean break with the congregation so that the rift they believe he caused can begin to heal.

Whether or not those discontented former congregants will ever return to RJC is one of the many questions that may be answered down the road. But for now the focus is on what “stepping aside” means, and when.