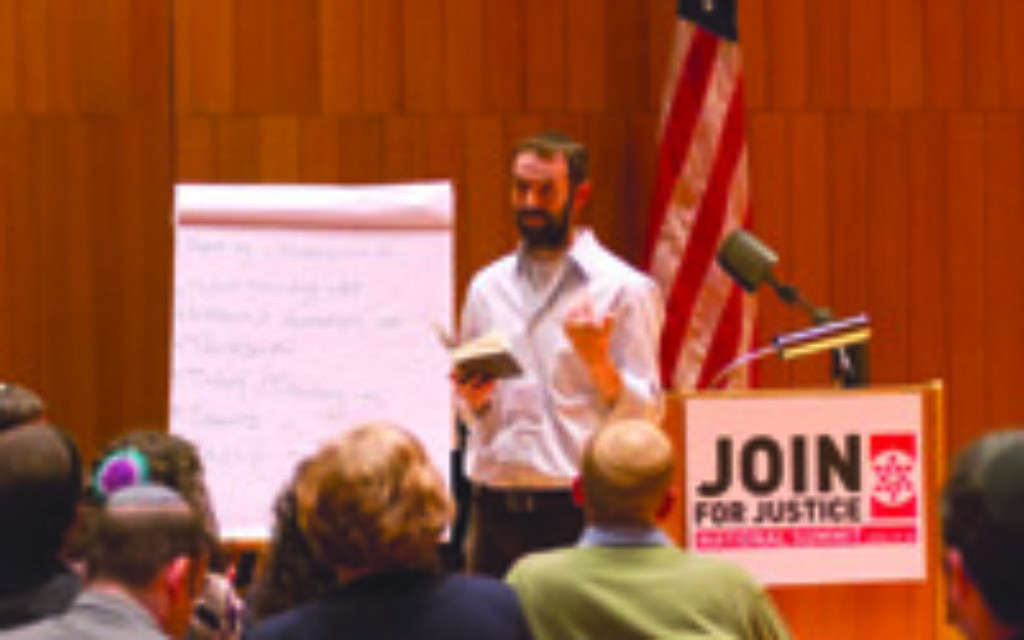 The Jewish world has never trumpeted its connection to the late Saul Alinsky, the father of modern community organizing. Maybe it’s because his methods — he called his signature work “Rules for Radicals” — have long been controversial. He’s still a target, drawing contempt from Newt Gingrich and Sarah Palin decades after his death.

Yet Alinsky’s legacy is coming home. On April 29 and 30, a new group, JOIN for Justice, debuted at a conference it hosted, which it called the first Jewish community organizing summit. And JOIN itself, whose acronym stands for Jewish Organizing Institute and Network, was created late last year to train Jewish groups in community organizing, or the work of supporting a group of people creating social change.

“There’s an inherent risk in billing this as ‘organizing,’” said Jordan Namerow, a communications consultant for JOIN who is also a writer at the American Jewish World Service. “We’re trying to de-stigmatize” the term.

JOIN is not only unafraid to stake its existence on the phrase, but also insists on its value far beyond the Reform movement and social justice efforts with which Jewish community organizing is typically associated.

“These tools are not just for social justice organizers,” said Karla Van Praag, JOIN’s executive director. “Organizing can be a general principle for how the Jewish community functions.”

The conference attracted about 230 attendees to Hebrew Union College-Jewish Institute of Religion’s downtown flagship, where for two days they scribbled in notebooks during seminars, nibbled on fruit and nuts, and curled up in oversized chairs to exchange war stories and shrieks of laughter over lunch.

They attended such workshops as “Is Online Organizing BS? Why We Should Give it a Second Look,” “Creative Ritual in Action” and “Strategic Lessons of Running National Campaigns,” and reveled in the connection to others who share their concerns and dreams.

“There are other people out there thinking the things I’m thinking!” said Melissa Nunes-Harwitt, who wants to bring what she learned at the summit to her Orthodox synagogue and to the broader Jewish community of upstate Rochester. “Someday, I’m going to be able to say, ‘I was at that first conference.’”

A registered nonprofit, the new group emerged as the result of a merger between a year-long organizing fellowship for young adults, the Jewish Organizing Initiative, and the Seminary Leadership project, a training and internship program for rabbis, cantors and educators housed at Bend the Arc. (Until a month ago, Bend the Arc was known as Progressive Jewish Alliance & Jewish Funds for Social Justice.) Bend the Arc, Repair the World and the Cummings and Dorot foundations are JOIN’s major financial supporters.

About 30 percent of the summit’s participants were enrolled in JOIN’s own programs, while the rest hailed from a range of organizations that reflected organizing’s steady march across the Jewish community, Van Praag said. Fees paid by attendees for its trainings already generate 15 percent of JOIN’s revenue, and Van Praag sees that number rising as demand grows. The summit itself covered its costs, and might become an annual event, she added.

“There’s a lot for synagogues in their everyday work to learn from the power and methods of community organizers,” said Rabbi Stacy Eskovitz Rigler of Reform Congregation Keneseth Israel, in Elkins Park, a suburb of Philadelphia. She plans to learn more about parents’ vision for the school she runs by holding a series of “one-to-one” meetings, an organizing tool that facilitates an intimate conversation between a community member and an organizer.

Alinsky “is not part of the lexicon in terms of Jewish literacy, but that’s starting to change in congregations that are doing organizing,” said Rabbi Esther Lederman, the assistant rabbi at Temple Micah, a Reform synagogue in Washington, D.C., who taught at the summit.

The Reform movement is quick to incorporate organizing techniques, like small meetings and petitions, into its congregations because it was the first movement to make systematic use of them in synagogue-based social justice work, such as the fight for affordable health care and housing. Over 160 Reform synagogues are already involved in an organizing network called “Just Congregations.”

“I have focused on using the techniques and skills to turn the synagogue into a place of relationship, not a fee-for-service institution,” he said.
Just two years ago, he added, there were a handful of Conservative rabbis who had done the Seminary Leadership Project, including Baum; now 21 have. Leaders of the Conservative movement’s Rabbinical Assembly also attended the summit because they understand the importance of organizing to more and more younger rabbis.

The summit also included a group that called itself the “Orthodox caucus.” The Orthodox community already boasts a prominent social justice group, Uri L’Tzedek, but there hasn’t been much discussion of community organizing in the Orthodox world, Nunes-Harwitt said.

“Part of what we talked about at that table [was] what are the unique challenges that community organizing poses to the Orthodox community,” she said. “It’s such a new conversation, I can’t even say there’s an answer.”

Of course, Jews participated and were even prominent in the social justice movements of the 1960s, like civil rights and feminism, said Heather Booth, an organizer who participated in Freedom Summer, the 1964 drive to register African-American voters in Mississippi, and taught at the summit.

But in the 1970s, Jewish organizing efforts faltered as the community’s leaders began to focus on specifically Jewish concerns, especially continuity and Israel’s security. Booth and other veteran organizers made a concerted effort to revive them about 15 years ago.

Today, the popularity of such groups as the American Jewish World Service, Bend the Arc and Avodah: The Jewish Service Corps, has forced the realization that social justice and community organizing can actually serve the goal of continuity.

“The greatest thing is the breadth, the variety, the engagement with so many different parts of the community,” Booth said. “Many strands had existed before. Now there’s a greater connection between them.”

View a video of the conference at: http://independentcinematography.com/JOIN/JOY.mov