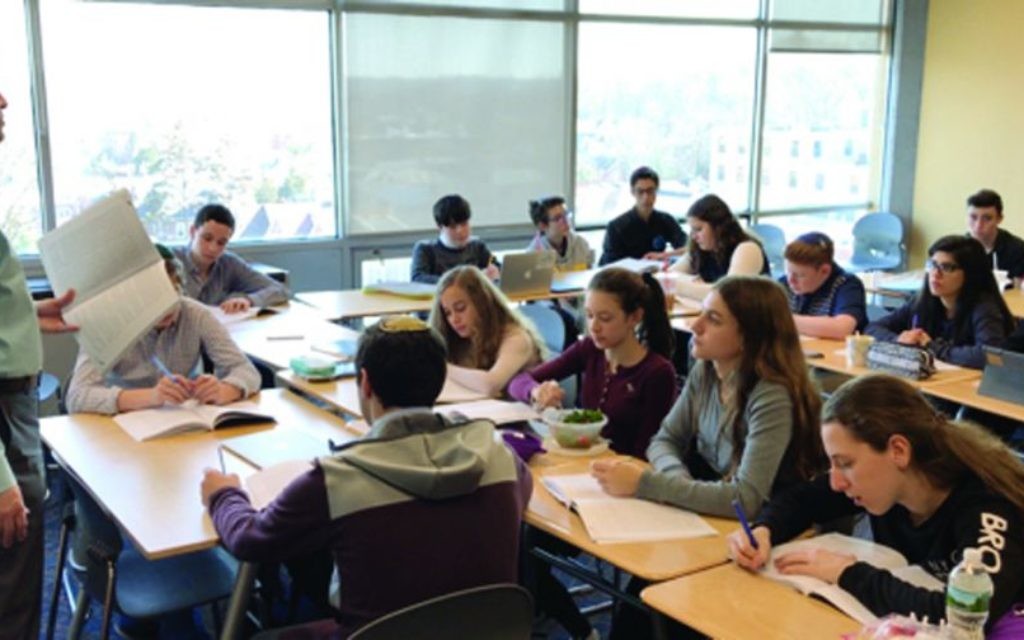 Tully Harcsztark inside and outside the classroom. “It’s an open space intellectually,” he says of SAR High School. Photos courtesy of SAR

During his first year as principal of the coed SAR High School 15 years ago, Rabbi Tully Harcsztark would make himself a visible presence in the Modern Orthodox day school, working out of an office surrounded by glass walls, and frequently walking the halls.

One day in the spring of 2004, a few SAR students approached him in a hallway with a curriculum suggestion: They wanted the school, whose only foreign language option was Spanish, to offer Arabic.

Arabic in a Jewish day school?

“I thought it was a cool opportunity,” Rabbi Harcsztark says.

The students offered two “opposite reasons” for their proposal, he says. Some wanted to learn about Arab culture, the way that Israel’s neighbors and many of the country’s residents live; others, with an eye on making aliyah, were hoping to join an intelligence unit of the Israeli Army. 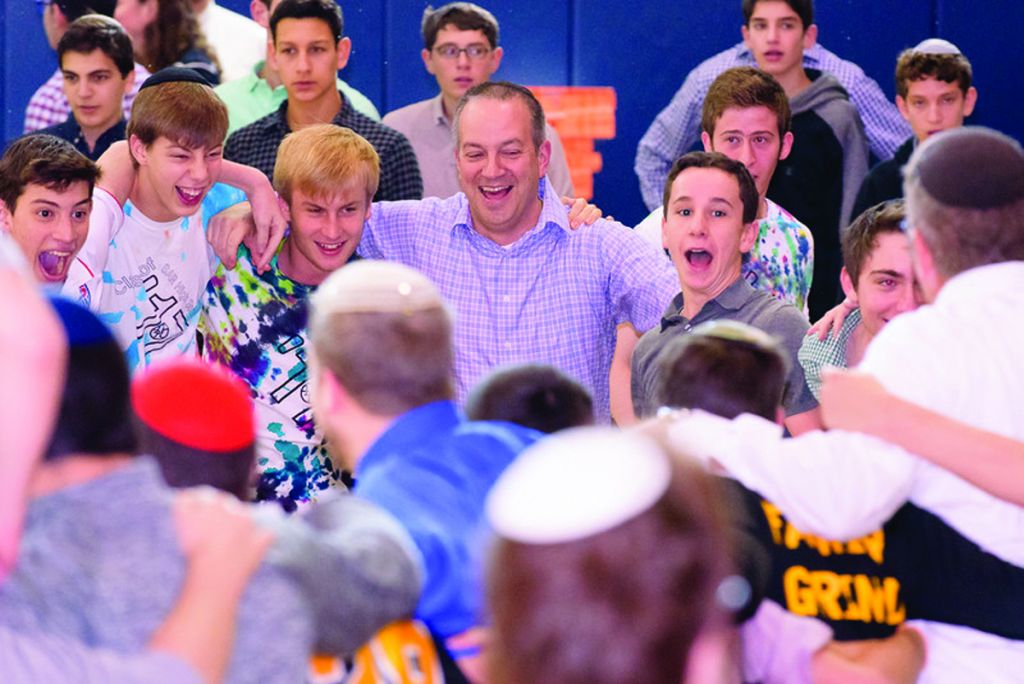 “Let me think about this,” the rabbi told the students. By the end of the school year, he said his answer was yes. Arabic lessons began at SAR the following September.

Rabbi Harcsztark, 52, who earlier this year was named as one of three winners of a Covenant Award given by the New York-based Covenant Foundation (the award carries a $36,000 prize; in addition, each winner’s institution receives $5,000), points to that conversation with the SAR students, and its outcome, as an example of the way he has attempted “to give the kids a voice” since becoming the school’s founding principal.

None of the Riverdale school’s innovations were snap decisions; he spent time consulting with scholars, reading through relevant Jewish texts and searching his conscience, Rabbi Harcsztark says. Despite what some might call boundary-pushing moves — letting girls put on tefillin, for instance — he says he had no second thoughts after he made his decisions, no doubts about the legitimacy of the proposals he approved; they were why the school was founded — to give expression to an open form of the Modern Orthodox movement, to offer students “a safe space” to explore their relationship with Jewish tradition.

“That is a very important part of what happens here,” says the rabbi, who describes himself as “halachically committed … deeply rooted” in Orthodox thought and observance, but “open” to the wider world.

Other examples, which have drawn praise in some religious circles and criticism in others, include his decision to let girls sing at SAR assemblies (though it had long been a practice in the lower school) and to start discussion sessions with small groups of students on such topics as sexual ethics and the efficacy of prayer. All the initiatives came at the suggestion of SAR students; the rabbi determined that none of the ideas conflicted with Jewish sources or Jewish law, he says. 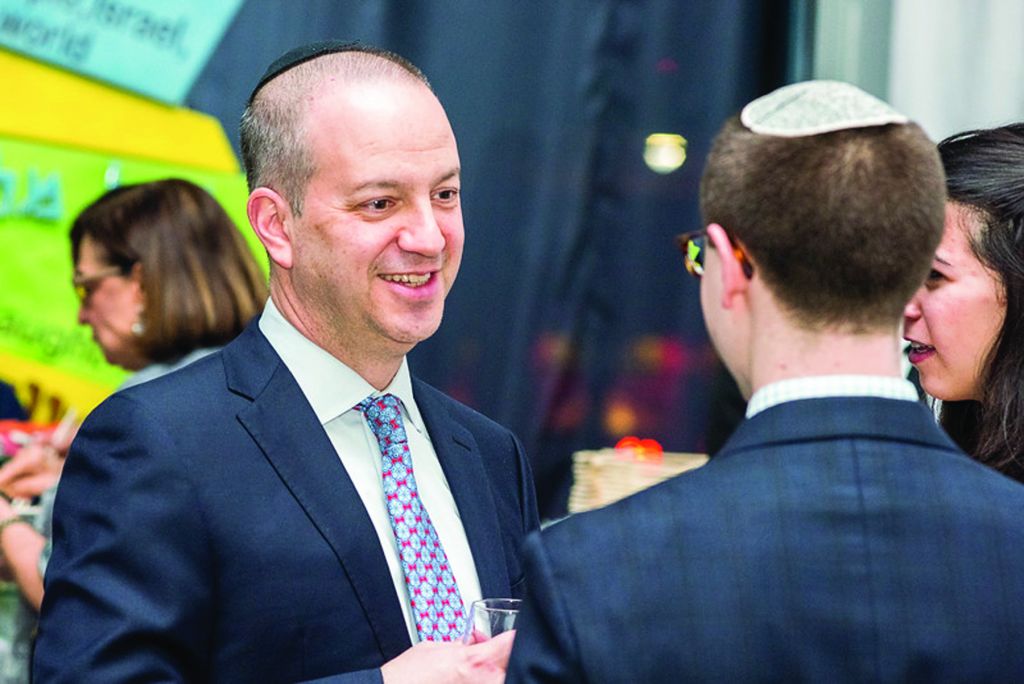 During Rabbi Harcsztark’s tenure, SAR High School has often come to be mentioned in the same breath as the Yeshivah of Flatbush and the Upper East Side’s Ramaz School, established Modern Orthodox institutions.

Some SAR outsiders claim that “kids run the school,” Rabbi Harcsztark says one recent morning at the school. “That’s not true at all.” He’s said no to some student ideas that he thought conflicted with the school’s Jewish principles. But he and teachers and other staff members who share his vision of an institution where students feel comfortable respectfully raising uncomfortable questions and making curriculum suggestions, have shaped a school that combines Orthodox Judaism’s respect for tradition with an atypical spirit of open inquiry.

“It’s an open space intellectually,” says Rabbi Harcsztark, whose style of dress (open-collar, no tie) reflects his individualistic, pedagogic style. The students “learn how to think. We’re creating Jewishly committed Jewish men and women who want to make a difference in the world.”

The rabbi (Tully is short for Naftali, his given Hebrew name) is the son of a Holocaust-survivor father from Lodz, Poland, and a mother from chasidic-Zionist roots in pre-war Warsaw. He was “raised … on the border, the razor-thin line where … tradition and modernity meet,” he wrote in a statement of motivation to the Covenant Foundation.

A Brooklyn native who attended charedi and Modern Orthodox schools and camps while growing up, he was associate principal of Judaic Studies at the SAR Academy, an elementary school ending in eighth grade, when he was was approached with the idea of establishing a partner high school in the Riverdale section of the Bronx. He spent a year studying other schools to determine what the SAR High School would look like intellectually and physically, and boiled his educational principles down to a succinct mission statement he calls “the ‘Grand Conversation’ between the Torah and the world.” 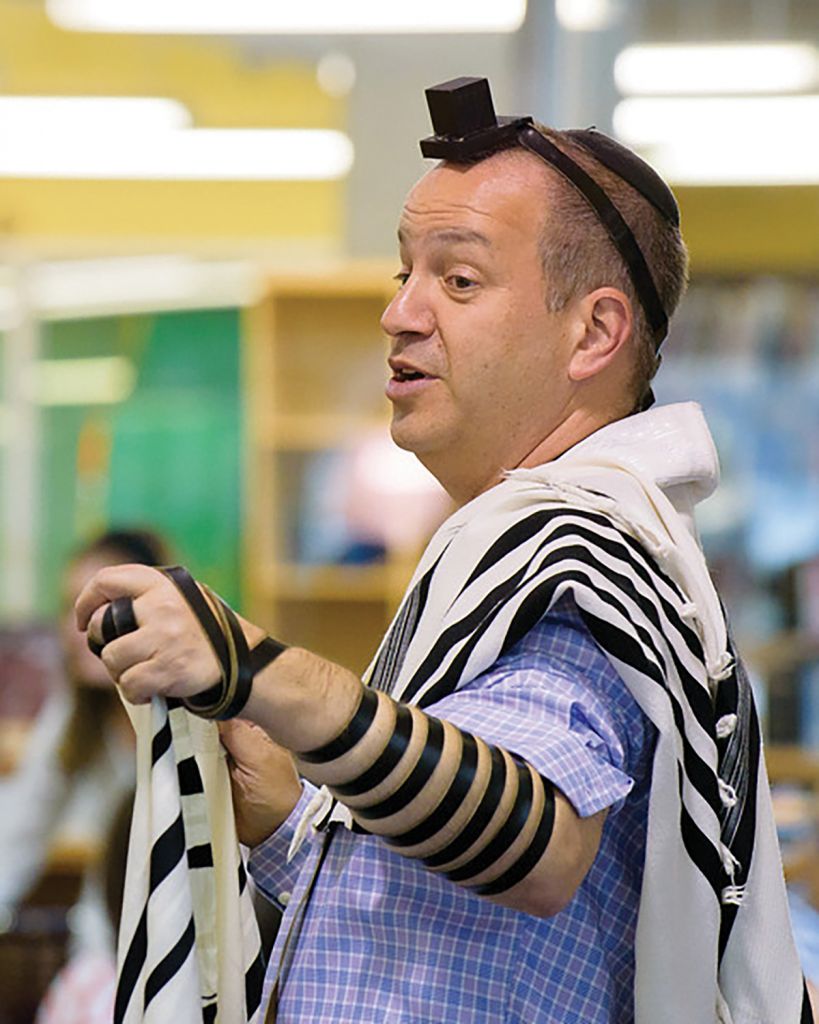 The principal davening and at a recent graduation.

For three days before the school held its first classes, Rabbi Harcsztark convened a three-day retreat — for everyone who would learn and work at the school — to learn about the Grand Conversation, which urges students, staff and teachers to “immerse themselves in a culture of learning and service as participants” in the conversation.

“It is a single sentence that gets a lot of play in school and shapes a lot of what we do,” coloring the school’s dual-religious-and-secular curriculum and extra-curricular activities, and making a statement about SAR’s dedication to the Modern Orthodox ethos of combining religious observance with involvement in the wider society, he says.

In a recent issue of The Buzz, the school’s student newspaper, the question was posed, “If you made a wind up SAR student doll, what would it say when you wound it up?” Answered one student: “The Grand Conversation.”

“The kids,” says Rabbi Harcsztark in an obvious understatement, “know the mission statement.”

The rabbi calls the Grand Conversation an extension of Modern Orthodoxy’s involvement with modernity, and of Yeshiva University’s “Torah Umadha” (Torah and secular knowledge) motto. At SAR High School, for example, such topics as biology and geology are taught from a scientific and religious perspective, and the Torah is studied from a literary point of view.

The Grand Conversation has led to such initiatives as a Beit Midrash program, patterned after community kollels around the country, which brings 10 young college graduates to the school each year to study and serve as resources for small groups of students; a Student Learning Center for students with a wide range of learning disabilities; an artist-in-residence program; and Machon Siach, a research institute for teachers to delve into a topic of interest and make presentations similar to TED Talks.

“My job is directing a lot of traffic,” says the rabbi, who teaches a Talmud class each semester.

“The mission of the school, ‘The Grand Conversation,’ pushing kids beyond their comfortable limits, is something that the kids internalize,” said Rabbi Binyamin Krauss, principal of the SAR Academy. “Pick up a copy of the school newspaper and you will find articles challenging the administration, honestly expressing some of the contradictions kids feel within their Modern Orthodox lives.

“Little is censored” at the high school, “and the school is proud that issue are discussed openly and with passion,” says Rabbi Krauss, who is Rabbi Harcsztark’s brother-in-law. “Rabbi Harcsztark’s open, honest and reflective nature have HAS fostered that atmosphere.”

“He had a fire in his belly for the high school project,” Gail Bendheim, a longtime member of the SAR board says in an email interview. “He managed to create such a good school quickly because he went about it with thoughtfulness, very patient research, a clear template and a strong backing from the lay and administrative leadership of the school. He had a very clear sense of mission” — i.e., the Grand Conversation — “that made it exciting for potential faculty to join the team.”

In 15 years, the high school has grown both in size of student body and teaching staff (from 60 to 525, and 8 to 110, respectively), and in reputation (being named as the New York City metropolitan area’s second-best private Jewish day school in two recent rankings, behind only the much older institutions Ramaz Upper School on the Upper East Side and Abraham Joshua Heschel School on the Upper West Side).

The Covenant Foundation, which supports Jewish education, praised Rabbi Harcsztark for having “imagined a new model of what a Modern Orthodox high school could be. SAR High School has become a national model of Jewish education adapting and embracing 21st century realities and equipping students and teachers in new, novel, and empowering ways.”

Harlene Appelman, executive director of the Covenant Foundation, says she invited a group of college students earlier this year to a Shabbat meal at her home in Ann Arbor, Mich. The talk around the table, she says in a telephone interview, turned to Jewish education.

One female student, who did not know the details about Appelman’s work at the Foundation or about Rabbi Harcsztark’s selection as an award recipient, started praising a day school she had attended and a teacher who had inspired her, Appelman says. “The school was SAR. The teacher was Rabbi Harcsztark.”

The rabbi, who convened a school assembly last year to pray in memory of the victims of the Pulse gay nightclub shooting in Orlando, was among a group of several dozen Orthodox rabbis and educators who in 2010 signed a public statement about homosexuality that declared that the roots of one’s sexual orientation “is irrelevant to our obligation to treat human beings with same-sex attractions and orientations with dignity and respect.”

The right-wing part of the Orthodox community, where the word of a rabbi or teacher is commonly accepted as law, sees the rabbi taking Jewish education in the wrong direction, probably more so than many other Modern Orthodox high schools do. Leaving the foundations of belief and practice open to students’ questioning is considered virtual heresy in more conservative circles, says Steven Bayme, director of contemporary Jewish life at the American Jewish Committee. “SAR … at the vanguard of Modern Orthodoxy … is the target.”

Rabbi Harcsztark says the criticism does not deter him. “My primary responsibility is this community’s kids and parents.”

“Does criticism bother me?” he asks.

He shrugs. Everything he does at SAR, he says, is firmly based in Jewish tradition. “I think the Modern Orthodox community is very wide-ranging.”

To relax, he spent part of this summer traveling with his wife.

Next month, he will welcome the class of 2017-18 to the SAR High School. During the first few days of the semester, he says, they will learn about the Grand Conversation. And Arabic classes will resume, taught by Irrit Dweck, an SAR graduate who studied Middle Eastern languages and cultures at Columbia University.

“She never imagined,” says Rabbi Harcsztark, “that she would spend her career in a yeshiva setting.” ●