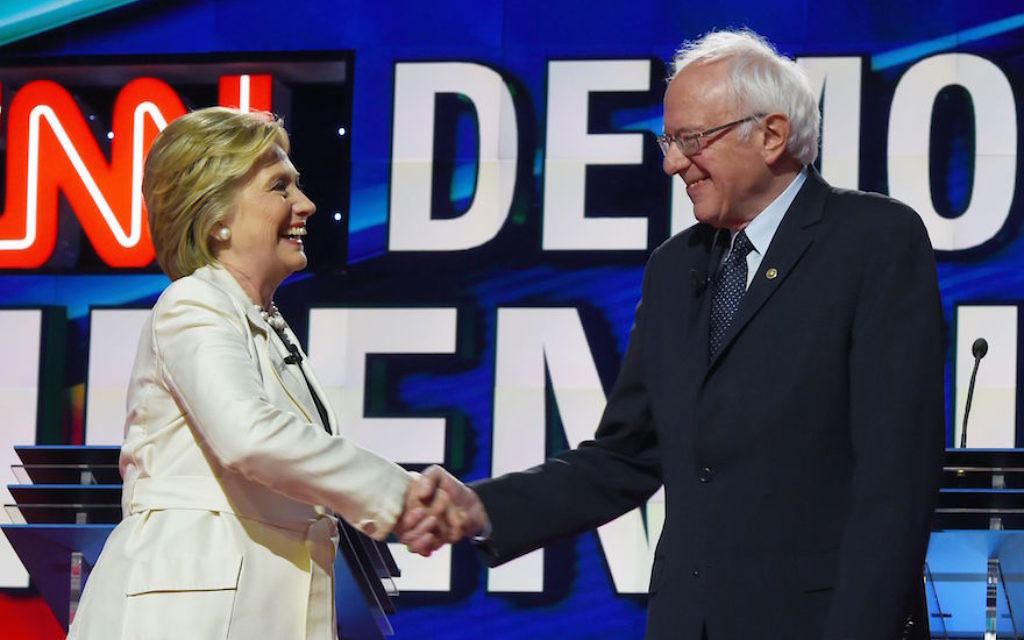 Washington — Bernie Sanders told his followers that the priority now was defeating Donald Trump and the bigotry he said the GOP nominee represented. He pledged to work with Hillary Clinton to make sure that happens, although he did not yet withdraw from the race for the Democratic presidential nod.

“The major political task that we face in the next five months is to make certain that Donald Trump is defeated and defeated badly,” Sanders, the Independent senator from Vermont, said in an address live-streamed Thursday evening to his followers marking the end of the primaries campaign. “And I personally intend to begin my role in that process in a very short period of time.”

Sanders, the first Jewish candidate to win major party nominating contests, noted his differences with Clinton on some issues, but, in a shift, emphasized that the greater threat was Trump, the real estate magnate whose securing of the Republican nomination has roiled the presidential race with accusations that his campaign is undergirded by bigotry.

Clinton, the former secretary of state, last week secured enough delegates to be declared the presumptive nominee, but Sanders is credited with nudging her to the left on issues like Wall Street reform, income equality and trade protection. He said he would continue to press Clinton on those issues, but for the first time in months, Sanders emphasized that he and Clinton shared much in common.

“It is no secret that Secretary Clinton and I have strong disagreements on some very important issues,” he said. “It is also true that our views are quite close on others. I look forward, in the coming weeks, to continued discussions between the two campaigns to make certain that your voices are heard and that the Democratic Party passes the most progressive platform in its history and that Democrats actually fight for that agenda.”

Sanders did not back out of the race, likely because he wants to leverage his delegates to shape the platform at the party convention in Philadelphia next month. Still, his address would likely be welcomed by the party establishment, which wants Sanders to campaign for Clinton after she is formally nominated, and to keep his followers on side in the general election.

Also likely to be assuaged by the speech: The pro-Israel establishment, rattled by Sanders’ sharp differences with Clinton on Israel, where Sanders has said the party should be balanced and take into account Palestinian claims. He did not mention Israel at all, and had only one sentence on foreign policy:”We must make certain our brave young men and women in the military are not thrown into perpetual warfare in the Middle East or other wars we should not be fighting.”

Sanders said he would also work to transform how the party selects its nominee, opening up the nominating process, and urged the party to extend its campaigning into all 50 states.

“The current Democratic Party leadership has turned its back on dozens of states in this country and has allowed right-wing politicians to win elections in some states with virtually no opposition – including some of the poorest states in America,” Sanders said. “The Democratic Party needs a 50-state strategy. We may not win in every state tomorrow but we will never win unless we recruit good candidates and develop organizations that can compete effectively in the future. We must provide resources to those states which have so long been ignored.”

A 50-state strategy, spearheaded by Howard Dean when he led the Democratic National Committee in the mid-2000s, helped Democrats win Congress for a period and elect President Barack Obama. Dean, a former governor of Sanders’ home state, Vermont, also led an insurgent presidential candidacy in 2004 that nudged the party left.

Since 2011, however, and under the stewardship of Sanders’ nemesis, DNC Chairwoman Rep. Debbie Wasserman Schultz, D-Fla., the party has focused more on securing swing states.

Sanders called on his followers to remain involved, a signal to some Sanders’ backers who on social media have said they have been disillusioned with the process and may sit out this election. He said that instead they should considering running for office.

“I hope very much that many of you listening tonight are prepared to engage at that level,” he said. “Please go to my website at berniesanders.com/win to learn more about how you can effectively run for office or get involved in politics at the local or state level. I have no doubt that with the energy and enthusiasm our campaign has shown that we can win significant numbers of local and state elections if people are prepared to become involved. I also hope people will give serious thought to running for statewide offices and the U.S. Congress.”