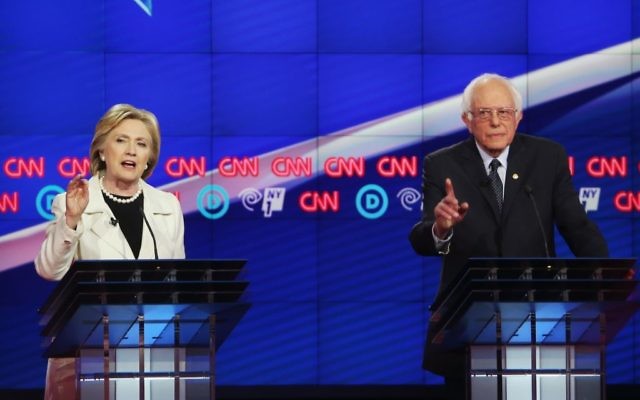 Well, now we know why Bernie Sanders chose not to address the AIPAC policy conference in Washington last month. His views on Israel and the Mideast conflict would have made him the target of the large, vocal audience, passionately supportive of Jerusalem.

Like it or not, Sen. Sanders opened a new chapter of dialogue within the Jewish community, and beyond, last Thursday night, during his debate with Secretary Hillary Clinton, on Israel and its treatment of Palestinians. Some believe he was deeply unfair to Israel in his remarks, criticizing Israel for “disproportionate” bombing of Gaza during the 2014 war with Hamas, and chastising Clinton for bias in favoring Israel when there are, he said, “two sides to the issue.”

Others, particularly young and progressive Democrats, assert Sanders cast light on an issue too long in the shadows, namely that Israel’s treatment of the Palestinians is inhumane and contemptible.

Ironically, for much of the presidential campaign there were complaints in the community that Sanders was too reticent about his Jewish identity, particularly when he identified himself as “the son of Polish immigrants.” (News, no doubt, to the Poles and to Sanders’ parents to be identified in that way rather than as Jews.)

For many, pride in the success of the first Jewish presidential candidate of a major party to win state primaries and caucuses was mixed with discomfort over his decidedly secular persona. But in recent days Sanders has spoken more of his Jewishness, expressed through commitment to equality and social justice, and he told a racist heckler in Harlem that he was “proud to be Jewish.

“I am a strong defender of Israel,” he said, “but I also believe that we have got to pay attention to the needs of the Palestinian people.”

The senator’s decision to hire as his Jewish outreach director a young woman who supports the BDS movement and is actively outspoken against Prime Minister Netanyahu and the settlements showed bad judgment, at best. She was quickly removed.

Sanders’ passionate critique of Israel at the Brooklyn debate, with no attempt at justifying Jerusalem’s position or explaining how he sees himself “a strong defender” of the Jewish state was another — and dramatic — wake-up call for those who still believe that American Jewish support for Israel and its policies is guaranteed.

On Monday, Vice President Biden, a deeply committed friend of Israel, expressed “overwhelming frustration” with the Netanyahu government. Speaking at a J Street conference, he said Israel was moving “in the wrong direction” in respect to peace efforts.

Rather than lash out at such longtime allies, it may be helpful to reflect on their comments. It’s clear our community has to improve its contemporary Zionist education, starting with our own children. We also have to recognize that some of Israel’s policies — not just its enemies — are a problem. Comments from Sanders and Biden underscore that the definitions of “pro-Israel” are changing dramatically and demand deeper dialogue.